All Americans abroad can use military post offices to mail ballots 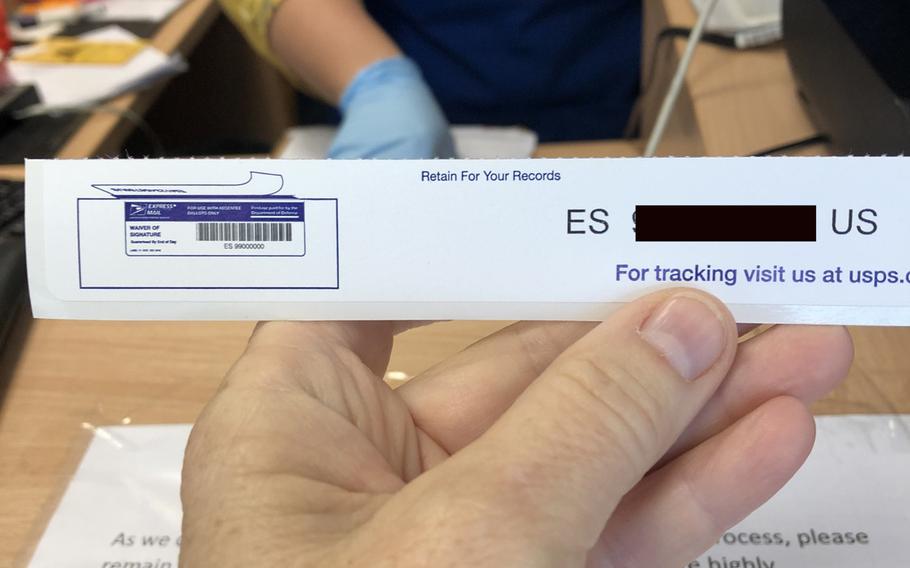 Buy Photo
A customer holds up an express mail tracking number for a ballot for the U.S. elections sent from the Army Post Office at Kleber Kaserne in Kaiserslautern, Germany, on Oct. 1, 2020. (Karin Zeitvogel/Stars and Stripes)

Buy Photo
A customer holds up an express mail tracking number for a ballot for the U.S. elections sent from the Army Post Office at Kleber Kaserne in Kaiserslautern, Germany, on Oct. 1, 2020. (Karin Zeitvogel/Stars and Stripes) 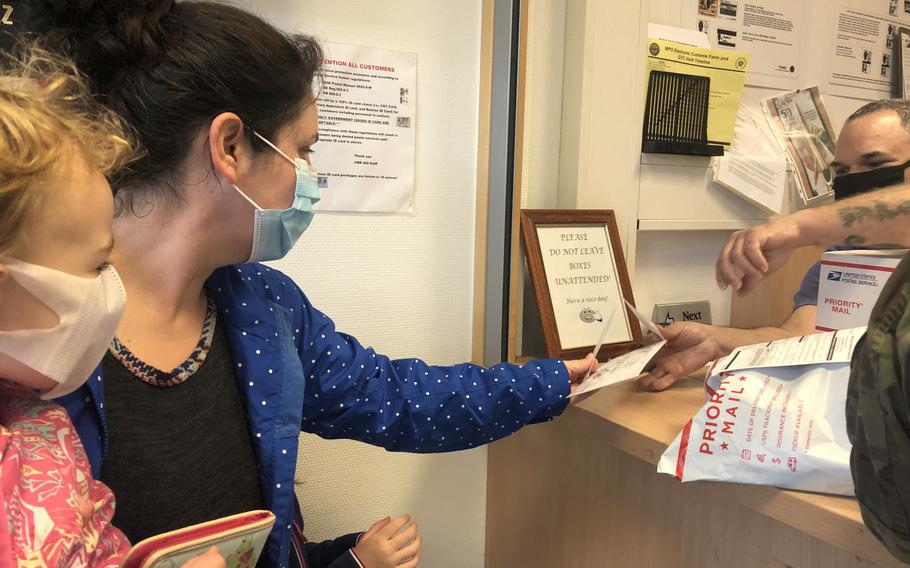 Buy Photo
Megan Zemke hands her completed ballot for the U.S. election to a postal clerk and is handed a tracking number at the Army Post Office on Kleber Kaserne in Kaiserslautern, Germany, on Oct. 7, 2020. Authorized APO customers' ballots are sent by express mail to the U.S. at no charge to the sender. (Karin Zeitvogel/Stars and Stripes)

KAISERSLAUTERN, Germany — Americans overseas who are registered as absentee voters for the Nov. 3 election can mail their ballots from a military post office, regardless of whether they have base access, officials said.

With less than a month to go before the election, Kleber Post Office in Kaiserslautern was sending out between 20 and 30 ballots a day, said Justin Price, postmaster for Kleber and Rhine Ordnance Barracks.

“If you bring us your voted ballot in the official envelope, we will mail it on,” Price said in a phone interview.

An authorized military post office customer isn’t allowed to mail something for Americans that don’t have such privileges, said Bill Hillsher, chief of postal policy and plans for U.S. Army Europe.

But Americans overseas who don’t have installation access can go to a base gate and ask for a postal clerk to come and collect their ballot after getting their passport checked, he said. Those ballots will be shipped via first class mail, which takes up to 10 days to reach the U.S., he said.

Ballots with a military return address will be sent free of charge via express mail and should arrive in the U.S. in three days, Hillsher said. The deadlines for receiving absentee ballots differ from state to state, but the information is available on FVAP.gov, the Federal Voting Assistance Program website, he said.

Megan Zemke tried to send her Alaska ballot from the Landstuhl post office this week but was turned away and told she had to send it from Panzer Kaserne, where she receives her mail, she told Stars and Stripes.

“I’d brought my daughter, who’s 6, with me,” Zemke said. “She was wearing a Susan B. Anthony T-shirt and was disappointed when I said we couldn’t vote that day.”

But as an authorized user, Zemke should have been allowed to send her ballot from any military postal facility that processes outgoing mail, Hillsher said.

Panzer does not, so Zemke went to Kleber on Wednesday and handed her ballot to the clerk, who gave her an express mail tracking number in return.

Ballots dropped in mailboxes in military post offices will also be sent via express mail, and a tracking number will be mailed to the military return address on the ballot, said Hillsher, who is also a senior USAREUR voting assistance officer.