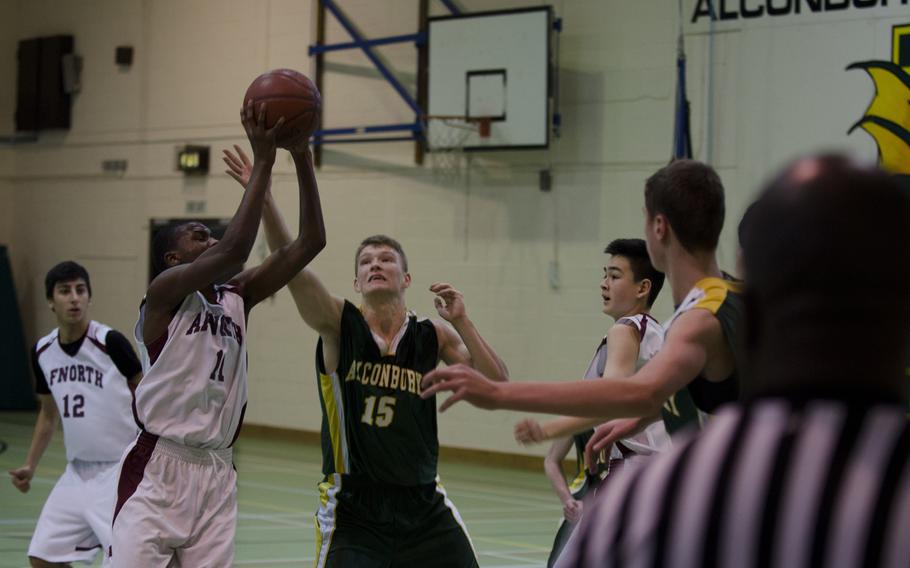 AFNORTH's Jacquon Sinclair vies for the ball with Pavel Karamshin of Alconbury, during a game Saturday, Jan. 18, 2014, at the Alconbury Middle/High School in England. The school's gym is closed until at least Thursday after a portion of the roof was blown off in severe weather over the weekend. (Adam L. Mathis/Stars and Stripes)

RAF MILDENHALL, England — Alconbury Middle/High School’s gym has been closed at least until Thursday after wind blew off a portion of the roof over the holiday weekend.

Principal Sandra Daniels said the base’s civil engineer section contacted school officials after tiles were ripped off the roof and an internal fabric bladder was damaged sometime between Friday evening and early Saturday.

“When they replaced the roof some years ago … they did not remove the original layer on the roof,” Daniels said in a telephone interview. “That’s good news because that’s what’s protecting the gym, and right now you couldn’t even tell from the inside that there’s any problems at all.”

Daniels said the gym might be ready for use again by Thursday pending a safety inspection by engineers. If the gym is closed for a long period of time, Daniels said, students can use base facilities and a gym the school shares with the elementary school. The rest of RAF Alconbury suffered only minor damage. A base spokesman said in a phone interview that some trees were blown over and lights were damaged, but described the damage as “nothing that really impacts anything.”

Parts of the United Kingdom have been lashed by extreme weather recently. The BBC reported on Sunday that wind knocked out power to more than 7,000 properties in England and Wales. Parts of southern England have also flooded and the U.K. Met Office had listed 112 flood warnings for England as of Tuesday.

The timing of the damage to the gym could have been worse. Winter sports have finished and the spring sports season generally involves outdoor sports, Daniels said.

Also, plans and money were already in place to replace the gym’s roof after the school year ended, and those plans are being accelerated to address the damage, Daniels said.