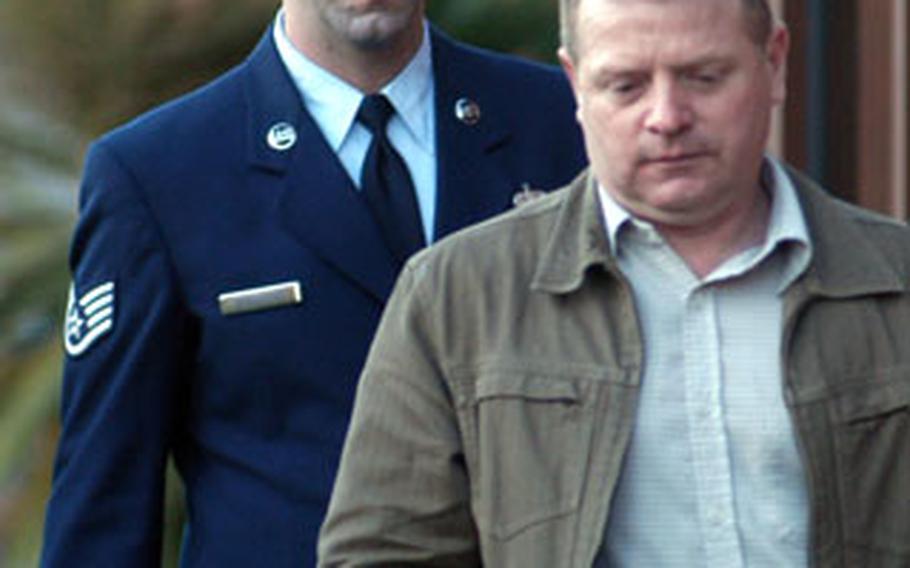 Staff Sgt. Joseph A. Spaulding is shielded by an unknown man as he walks to the RAF Mildenhall courtroom to hear his sentence on Friday. (Sean Kimmons / S&S)

RAF MILDENHALL, England &#8212; An RAF Alconbury noncommissioned officer was found not guilty of three separate sex crime charges at his court-martial Friday, but was found guilty of a lesser charge.

Staff Sgt. Joseph A. Spaulding was declared not guilty of rape, child rape and sodomy, but guilty of indecent acts with a child for climbing naked into the bed of an 8-year-old girl in 2004.

He was sentenced to six months confinement with total forfeiture of pay and a reduction in rank E-1, a base spokeswoman said.

He also will have to register as a sex offender in the United States, according to his civilian defense attorney.

Spaulding, who serves with the 423rd Civil Engineering Squadron, also was found guilty of simple assault in 2005 and pushing a pregnant woman down a flight of stairs in 2002 while stationed in North Dakota.

The panel of seven men and two women reached its verdict Friday afternoon.

The trial began a week earlier and involved more than a dozen witnesses, including an expert in child behavior, an Air Force Office of Special Investigations agent, a Cambridgeshire Constabulary police constable and assorted members of the RAF Alconbury community.

The two chief witnesses &#8212; a former employee at RAF Molesworth&#8217;s Joint Analysis Center and a 10-year-old girl &#8212; testified for the better part of Monday and Tuesday. Neither witness is being identified in accordance with Stars and Stripes policy to not name victims of alleged sexual assault.

McCormack introduced doubt by questioning the alleged elder victim&#8217;s credibility after she called British police about an alleged assault by an unknown suspect outside her English home.

British police constable Matthew Thomas testified that there was no evidence of an assault, adding the alleged victim refused to cooperate with his investigation after calling the police.

An RAF Alconbury master sergeant also referred to the alleged elder victim as a &#8220;habitual liar&#8221; during McCormack&#8217;s questioning, which drew a sharp rebuke from Judge (Col.) Dawn Eflein, chief trial judge of the Air Force.

After the verdict was announced, both the prosecution and the defense delivered their sentencing statements.

Capt. Shelly Frank from the prosecution argued Spaulding should face three to five years confinement and a dishonorable discharge.

McCormack, meanwhile, asserted that Spaulding&#8217;s status as a sex offender should be punishment enough and urged the panel to avoid sentencing him to jail.