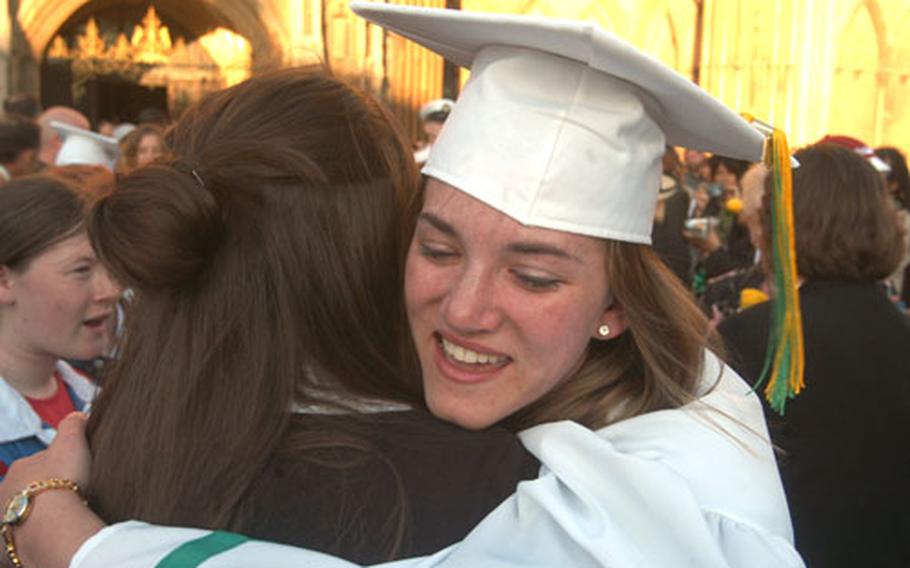 Amanda Erickson cries and hugs following the graduation ceremony for Alconbury High School at Peterborough Cathedral in England on Friday. The school at RAF Alconbury, England, has held its ceremonies at the medieval cathedral since 1982. (Ron Jensen / S&S)

PETERBOROUGH, England &#8212; The medieval magnificence of Peterborough&#8217;s cavernous cathedral could barely contain the joy of 18 graduates from Alconbury High School on Friday evening.

With diplomas in hand at ceremony&#8217;s end, they walked through the 14th-century entrance into the low evening sunlight and let out &#8220;whoops&#8221; rarely heard in a sacred place of worship.

No sadness for him, he said as he now prepares to study computer science in London.

Amanda Erickson, too, claimed to be happy, but the tears rolling down her cheeks as she hugged family and friends seemed to indicate otherwise.

&#8220;They&#8217;re happy tears,&#8221; she said in between hugs. She plans to attend Brigham Young University in Provo, Utah, but will remember the school at RAF Alconbury.

The school has been holding its graduation ceremonies at the wonderful old cathedral since 1982. It is the place where Mary, Queen of Scots is buried. Katherine of Aragon, too, a wife of Henry VIII, is buried in the cathedral.

The main speaker of the evening was Lydia Evans, who was an Alconbury student four years ago. She left in her senior year when her Air Force father was transferred, so she never took part in the ceremony until Friday.

Evans, 22, a senior at the University of North Texas, lost both her legs and most of her fingers to bacterial meningitis nearly three years ago. But she referred to that only obliquely in her address.

Instead, she gave the students a pep talk, cautioning them not to go too fast or worry too much.

&#8220;I know the most important thing: You&#8217;re going to be OK,&#8221; she said. She recalled with fondness her days at Alconbury High School and mentioned by name several friends she had there, people with whom she is still in touch.