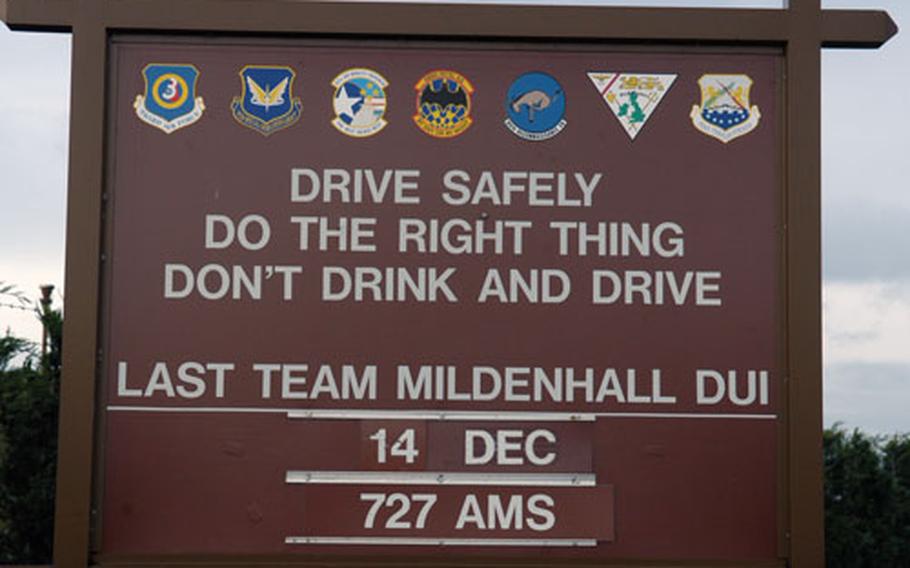 Signs showcasing the latest driving-under-the-influence record for an Air Force wing community are a common fixture at U.S. Air Forces in Europe bases as the service continues to try to reduce the number of alcohol-related offenses within its ranks. (Geoff Ziezulewicz / S&S)

A year after ambitious goals were set by Air Force leadership to slash alcohol- and drug-related offenses in the service by up to 25 percent, the numbers have not panned out exactly as planned.

In December 2006, the Air Force assistant vice chief of staff, Lt. Gen Arthur Lichte, announced the goals as part of the Culture of Responsible Choices Campaign, or CoRC, a program that looks to target and reduce high-risk behaviors, most notably alcohol- and drug-related issues.

The numbers didn&#8217;t drop that mightily.

CoRC is a servicewide initiative designed to look at health behaviors that can affect Air Force communities, and it works through and with other existing base-level programs, said Dr. Milton Cambridge, the Air Force Demand Reduction Outreach Program coordinator.

While leadership wanted that higher goal number, a 3 percent to 5 percent reduction would have been more realistic, he said.

Officials did not provide numbers for drug-related offenses in fiscal &#8217;07, saying they were still compiling the data. A 25 percent drug offense reduction goal was announced by Lichte in December 2006, and Cambridge said he didn&#8217;t expect that benchmark to be met either.

CoRC is an expansion of a responsible-drinking campaign that began at F.E. Warren Air Force Base in Wyoming and achieved a 68 percent drop in alcohol-related incidents at the base.

That success may have led Air Force leadership to consider the 20 percent reduction mark for the entire service, Cambridge said.

&#8220;When leadership saw those figures, they felt the program should be generalized and expanded throughout the Air Force,&#8221; he said. &#8220;They felt for wing commanders to be seriously invested, a 25 percent goal was better than a 3 percent goal we were lobbying for.&#8221;

Such initiatives need to be looked at over a longer time period, with better trend data, he said.

After the goals were announced around this time last year, the parameters for what constituted an alcohol-related offense were changed and better codified, said Maj. Nicole Frazer, the deputy for Air Force substance abuse programs.

No funding is being provided as of yet to commands for the CoRC program, but the program does offer ideas, toolkits and data for wing and major command leadership to use in the name of getting the word out on irresponsible and potentially destructive behavior, alcohol abuse included.

Funding through CoRC may be available in the near future, but nothing&#8217;s been sorted out at this point, Cambridge said.

The push to reduce alcohol-related offenses is largely aimed at younger airmen who may be on their own for the first time, Frazer said.

While some young airmen partake in the same binge drinking as their peers who are in college, the Air Force ranks are &#8220;pretty far below&#8221; the college-age population in terms of binge drinking, she said.

But in the service, binge drinking can cost an airman a lot more, Frazer said.

Signs showcasing the latest driving-under-the-influence record for an Air Force wing community are a common fixture at U.S. Air Forces in Europe bases as the service continues to try to reduce the number of alcohol-related offenses within its ranks.