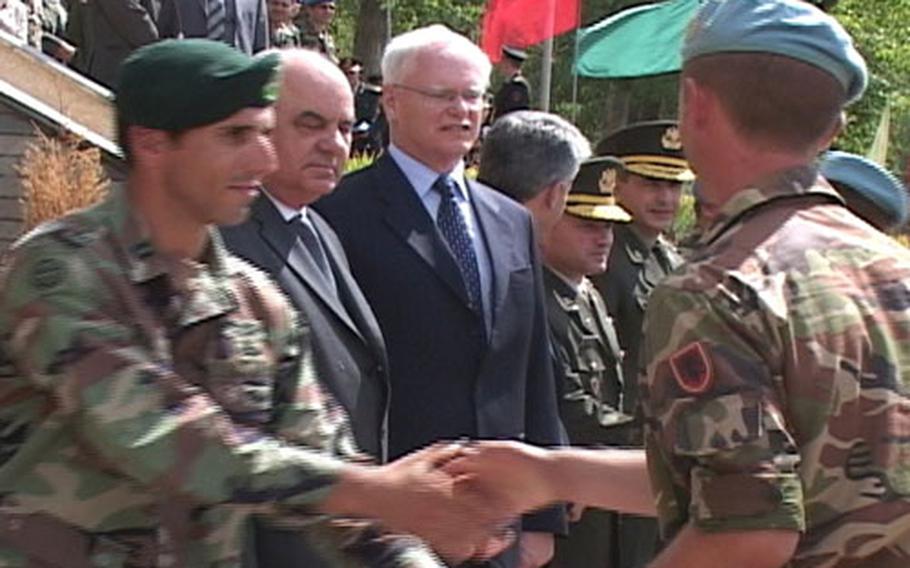 Europe-based Navy SEALS, Green Berets and Air Force personnel have trained a company of Albanian commandos who will assist the 101st Airborne in Iraq.

The training, which is occurring outside the Albanian capital of Tirana, is helping Operation Iraqi Freedom while demonstrating that the United States has a commitment to the Balkans, said James Jeffrey, the U.S. ambassador to Albania.

Albania has between 70 and 100 troops it is sending to help the 101st in Iraq. The troops being trained will be rotated with Albanian troops already in Iraq working with the 101st Airborne, according to the Special Operations Command Europe.

After the Albanian commandos go to Iraq, another unit will be trained in Albania to replace them, with the units being continually replaced, Jeffrey said.

The instruction was part of Joint Combined Exchange Training and took several weeks to complete at a military base in Zall-Herr, Albania.

Robishaw said the Albanians, most of them around 18 and 19 years old, were taught advanced marksmanship and participated in drills that would help in an urban environment. Soldiers built a rudimentary 25-meter shooting range on a soccer field for the training, which began in August.

Over the past few weeks, the commandos, which included noncommissioned officers and officers, worked on light infantry tactics, survey skills and how to work with small units. Robishaw said the Albanians also learned to conduct troop movements with nonverbal commands.

Most countries sending troops to Iraq are also getting financial and other assistance from the United States.

The Albanians, who are also assisting U.S. forces in Afghanistan, will be airlifted to Iraq by the Americans, Jeffrey said.