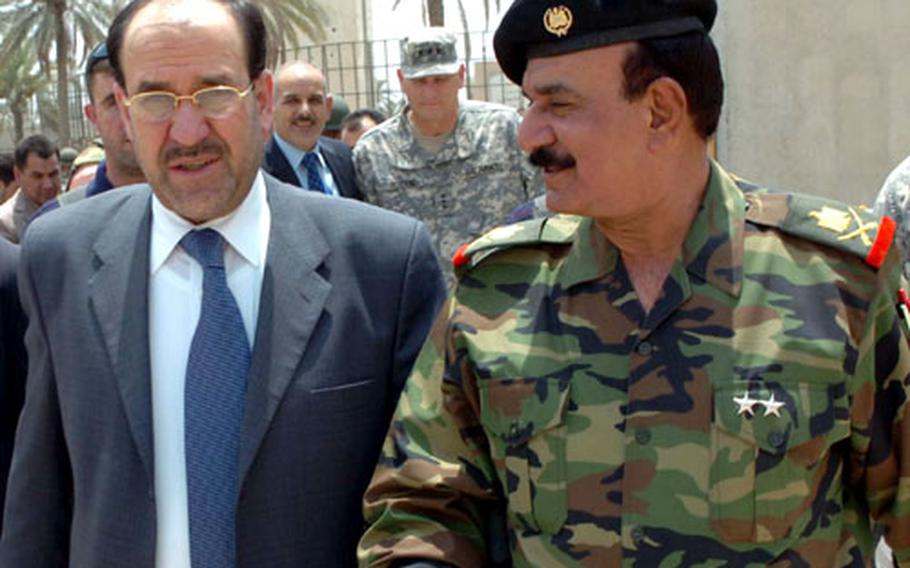 Iraqi Prime Minister Nouri al-Maliki made his first visit Thursday to Diyala province, meeting with local political, military and tribal leaders as officials try to capitalize on the momentum of the recent military sweeps through Baqouba.

Iraqi and American officials have said that many insurgents from Baghdad had moved north into Diyala to avoid the &#8220;surge&#8221; of troops into the capital. Beginning last month, U.S. and Iraqi troops launched a large offensive to clear areas thought to be infiltrated by insurgents.

During Thursday&#8217;s meetings, al-Maliki met with the governor of Diyala, tribal leaders, the Iraqi Security Forces leadership and U.S. military officials at the Baqouba Government Center.

&#8220;The prime minister&#8217;s visit is vital, not only for the government and security officials, but for the people of Diyala to see that their effort in achieving peace and fighting against terrorist groups does not go unnoticed,&#8221; said Col. David W. Sutherland, commander of troops in the province.

&#8220;We are here to thank all the excellent efforts by you, and we also came to thank the people of Diyala,&#8221; al-Maliki said, according to a transcript of his comments. &#8220;We can say that the suffering of Diyala people is ending; and we in the central government appreciate all your efforts.&#8221;

&#8220;This province suffered a lot from the outlaws. They wanted it to be a huge graveyard, but we wanted something else for Diyala &#8212; and we succeeded when the Iraqi army, Iraqi police, tribes and all other people found out what the terrorists are really made of.&#8221;

Since the military sweeps, U.S. and Iraqi forces have made an effort to get tribal leaders to pledge their assistance.

Earlier this week, U.S. military officials announced they had brokered a &#8220;peace agreement&#8221; between some 18 tribal and local leaders in volatile Diyala province.

The effort centered on the city of Khalis, near Baqouba, where U.S. and Iraqi troops are conducting an ongoing house-to-house sweep of the city.

As has been the case in other areas, many local residents have chafed at the continuing violence sponsored by the insurgents and the hard-line Islamic law imposed in some areas.

In Baqouba, in particular, residents were shocked when local militant groups tried to enforce a no-smoking law.