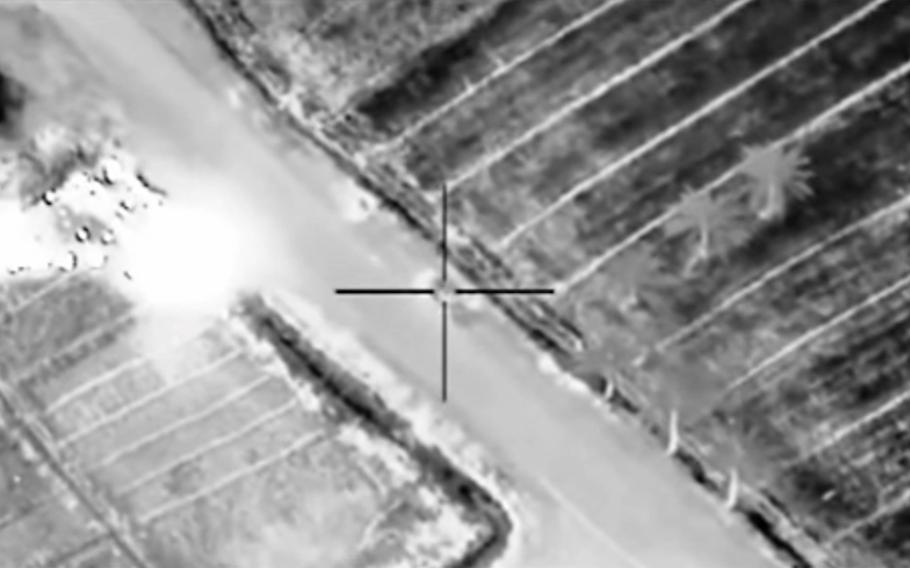 WASHINGTON — For the first time, a coalition airstrike destroyed a drone operated by the Islamic State, according to officials with Combined Joint Task Force-Operation Inherent Resolve.

The Tuesday attack on the remotely piloted aircraft occurred near the Iraqi city of Fallujah, an insurgent stronghold.

Unlike the famous U.S. military MQ-1 “Predator” drone, the Islamic State drone that was destroyed was small and unsophisticated, according to Danish Army Maj. Kim Michelsen, a CJTF-OIR spokesman.

“It was one of these off-the-shelf drones that you can actually buy out there [commercially]. You can throw it and it’s remotely controlled,” he said.

Michelsen said the aircraft was unarmed and was probably being used for surveillance purposes.

“That’s the only real military purpose of it,” he said.

The coalition isn’t sure how the group came into possession of the aircraft.

“It could be for sale in Raqqa (Syria) or Mosul (Iraq) when they moved into these towns,” Michelsen said. “We are not talking 21st century technology here.”

According to CJTF-OIR, the drone was destroyed while it was on the ground, not in midair.

“They were discovered while flying around with it. And … after they flew around with it for some time, they packed it down again and put it into a car and then we bombed the car,” Michelsen said.

He declined to identify which member of the coalition carried out the strike.

The United States, Australia, Belgium, Canada, Denmark, France, Jordan, Netherlands, and the United Kingdom are part of the coalition that has been conducting airstrikes in Iraq against the Islamic State. The U.S., Bahrain, Jordan, Saudi Arabia and United Arab Emirates have also been bombing the group in Syria.

Because of political sensitivities, the U.S. military and CJTF-OIR sometimes decline to identify which country carried out a particular strike.

“We have unconfirmed reports from the front lines that it’s happened before, but it’s the first time we’ve actually seen it ourselves,” Michelsen said.

It’s unknown how many drones the Islamic State has in its inventory.

“We don’t have a clear picture of that,” Michelsen said.