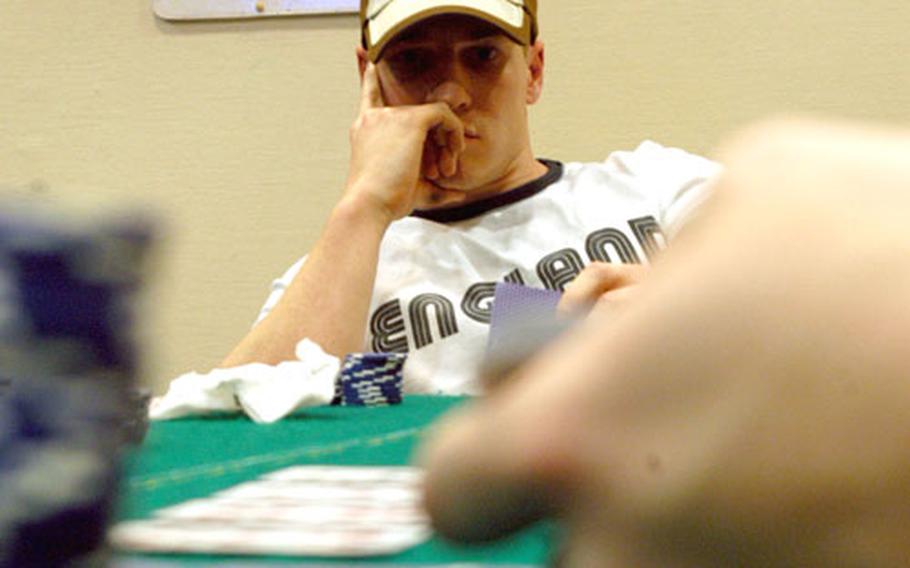 Senior Airman Edward McCorkell watches the board and his dwindling stack of chips at the final table at Lakenheath’s Tuesday poker night. McCorkell was unable to stage a comeback and finished fourth. (Ben Murray / S&S)

Senior Airman Edward McCorkell watches the board and his dwindling stack of chips at the final table at Lakenheath’s Tuesday poker night. McCorkell was unable to stage a comeback and finished fourth. (Ben Murray / S&S) 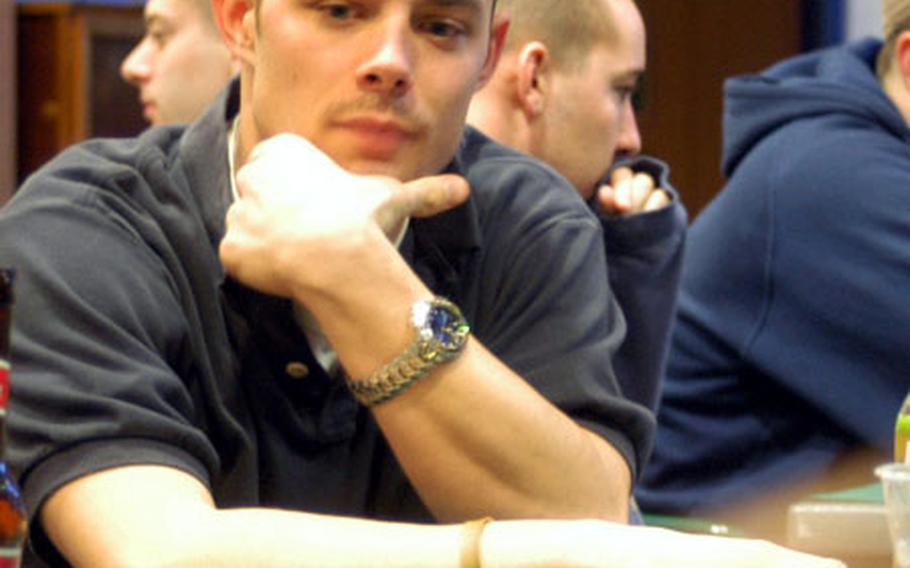 Senior Airman Steve Massey watches closely as Senior Airman Michael Myers, not shown, reaches for his stack in an early round of play. (Ben Murray / S&S) 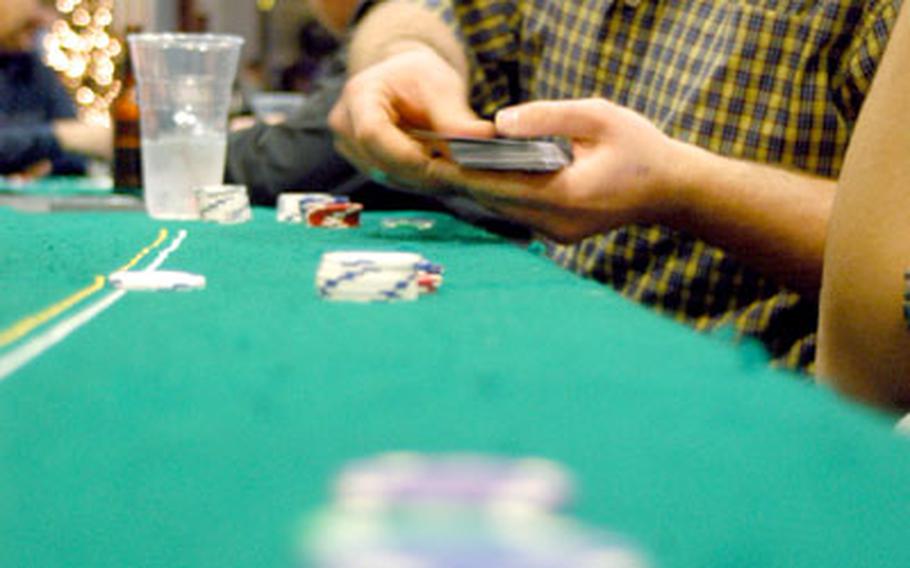 Senior Airman Kevin Conner doles out the cards for another round of hold’em in a hand at the Lakenheath Liberty Club’s Tuesday evening poker night. (Ben Murray / S&S)

Standing 6-foot-10 and boasting a history of tournament success, he&#8217;s a pretty big presence at the table, eyeing the other players and flipping a chip over his finger.

Though he&#8217;s been playing cards for only a few years, Meyer got so good at poker so fast that he was quickly supplementing his Air Force income with casino winnings.

Add to that the money rolled up after playing up to six hours of online poker a day, and he was almost winning enough to make him a bona fide rounder.

With that kind of passion for poker, and specifically for no limit hold&#8217;em (the Cadillac of poker), Meyer came looking to play when he got assigned to RAF Lakenheath in June.

But when he arrived, he found there was no regular game at Lakenheath.

The result was the birth of his own poker event, a Tuesday night game at the Lakenheath Liberty Club open to anyone free of charge, with sponsorship from the base club.

Offering low stakes, low pressure and low-end prizes, the weekly was the first of a pair of events that has signaled a rise in poker playing options around the base in recent months.

Last Thursday, a poker club opened its doors just outside the gates at Lakenheath that is closer to the original vision Meyer had when he started his own game: A real, for-money poker game with more than just pride at stake.

Called simply the Lakenheath Poker Club, the venue is run by a father-and-son team of local residents who got inspired to open a gaming house after playing at a poker club in Florida last year. The pair had so much fun, said Terry Bedford, the father, that they thought people in the rural flatlands abutting Lakenheath would spring at a chance to play in a similar club.

Set up to function similar to a poker room at a casino, the club will have experienced dealers and waitresses delivering drinks to the tables. Chips, or &#8220;checks&#8221; to the learned, are bought at a cash cage where both English and American money will be accepted, Bedford said.

To start, games will mainly have fixed-limit betting with minimums running to as low as 1 pound, he said.

But the goal of the club is to essentially cater to the demand of the players, Bedford said. If enough players sign up for a high-stakes, no-limit roundup full of gutshot straights and all-in calls on the river, then the club will host it, he said.

The catch of the club is that, since this is a new enterprise, the Bedfords are trying to keep the operation somewhat low-key to start. To get the address of the place, for instance, a potential player is asked to become a member by signing on at www.lakenheathpoker.com, the club&#8217;s Web site. A membership packet is then sent to the player explaining how to get to the club.

Interest is already strong, Bedford said. By last Friday, around 200 people had registered to play, he said.

That level of interest is also apparent in American players, if Meyer&#8217;s Tuesday night game is any indicator. Even at a recent game only offering the chance to win vouchers to the Liberty Club, about 25 people showed up to play, many of them fluent in the language and rituals of the hold&#8217;em.

But Meyer still wants to expand the game.