Airmen will take to the sea in English Channel swim attempt 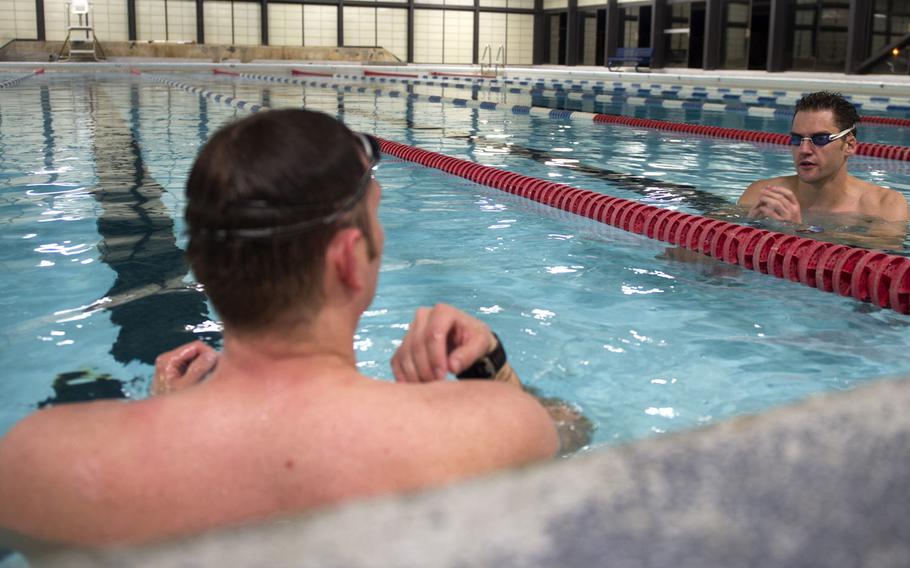 Air Force Maj. Casey Bowen, left, and Maj. Simon Ritchie discuss swim timing and coordination to build their endurance for the English Channel swim challenge in September 2016. The English Channel is about 21 miles of cold water. They could face gusting wind and waves up to 6.5 feet. Bowen and Ritchie are dermatologists with the 59th Medical Operations Group. (Kevin Iinuma/U.S. Air Force)

Air Force Maj. Casey Bowen, left, and Maj. Simon Ritchie discuss swim timing and coordination to build their endurance for the English Channel swim challenge in September 2016. The English Channel is about 21 miles of cold water. They could face gusting wind and waves up to 6.5 feet. Bowen and Ritchie are dermatologists with the 59th Medical Operations Group. (Kevin Iinuma/U.S. Air Force) 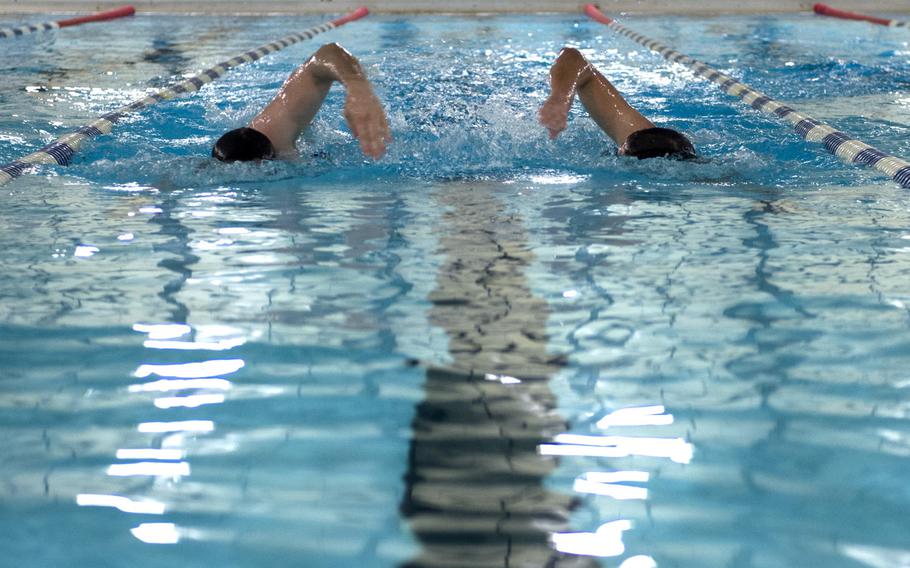 In preparation for the English Channel swim challenge in September 2016, Air Force Maj. Casey Bowen, and Maj. Simon Ritchie, 59th Medical Operations Group dermatologists, synchronize their swim speed at the Skylark Pool at Joint Base San Antonio-Lackland, Texas, on July 7, 2016. The doctors met while attending the U.S. Air Force Academy in Colorado, and reconnected when they were both assigned to the 59th Medical Wing. (Kevin Iinuma/U.S. Air Force)

It’s not the first time the two Air Force doctors have trained for a high endurance challenge. But attempting to swim across the 21-mile English Channel later this month, struggling against frigid water and buffeting tides, will be the culmination of two years of training.

For Air Force Majors Casey Bowen and Simon Ritchie, military doctors based out of San Antonio, this is the latest chapter in a friendship built on overcoming challenges and pushing each other to their physical limits.

The pair met more than a decade ago while attending the U.S. Air Force Academy in Colorado where they shared a passion for swimming. After graduation they parted ways for separate medical schools and military assignments. The doctors, both dermatologists, reunited when assigned to the 59th Medical Operations Group in San Antonio. Since then they’ve competed in multiple endurance events and swam together across the 16-mile Catalina Channel in California.

“I think that developing mental toughness really extends into every portion of your life,” Ritchie said in a telephone interview.

Preparing for the grueling swim across the English Channel to France — which depending on conditions can take from eight hours to more than 20 — also meant getting creative. With frigid ocean waters that range from 50 to 60 degrees Fahrenheit, the men had to find access to cold waterways to prepare their bodies — that’s not so easy in the parched lands of the southwest sunbelt.

“We’d go in my neighborhood pool when it was 30 degrees outside and stay in there as long as we could,” Bowen said. “We found a city park that was spring-fed and the water was high 50s (degrees Fahrenheit) and we were excited to swim there but we only made it about 30 minutes before the police came” and told them swimming there was not allowed.

Another challenge they faced was gaining weight.

“You can’t wear a wetsuit in the channel so all you can do is get fat. For people who’ve been in endurance sports for most of their adult life that’s not an easy task,” Bowen said.

The airmen will each attempt to cross the channel on back-to-back days during a window from Sept. 22 to Sept. 29 with a boat manned by a specialized crew including a witness from the Channel Swimming Association, which authenticates Channel swims, and a safety monitor.

Bowen will swim first while Ritchie watches from the boat, hoping his history of resilience against motion sickness holds up in the rocking waters.

“Being on that boat that goes two knots through the English Channel is a recipe for sea sickness. I’m very fortunate that I’ve never been motion sick in my life,” Ritchie said.

They both agreed that they’re prepared for the challenge of their life but if anything were to go wrong at least another doctor would be nearby.

“We’re both physicians and we’re both trained in advanced cardiac life support. So God forbid, if anything were to go wrong, hopefully we’ll be able to revive one another,” Bowen said.

The airmen’s command will be rooting them on.

“We’re very proud of Casey and Simon. Their drive and dedication toward achieving their goal of swimming the English Channel is nothing short of amazing,” acting 59th Medical Wing Vice Commander Col. Andrea C. Vinyard said in a statement. “Their passion is matched only by their strong commitment to our patients. Count me and all of the Warrior Medics among their biggest fans. We expect them to succeed, and to represent the 59th Medical Wing and the Air Force well.”