Airmen use patrol near Ali Base as insurgent deterrent 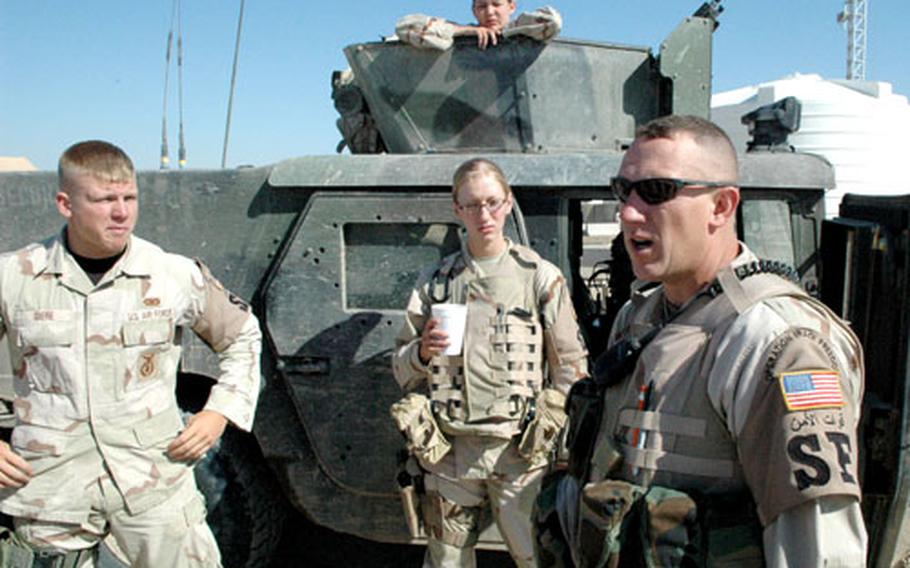 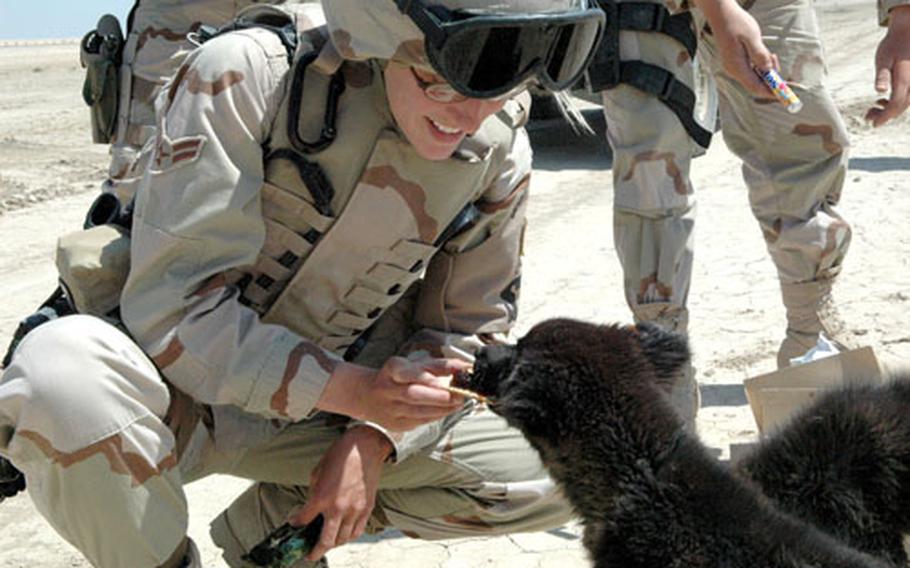 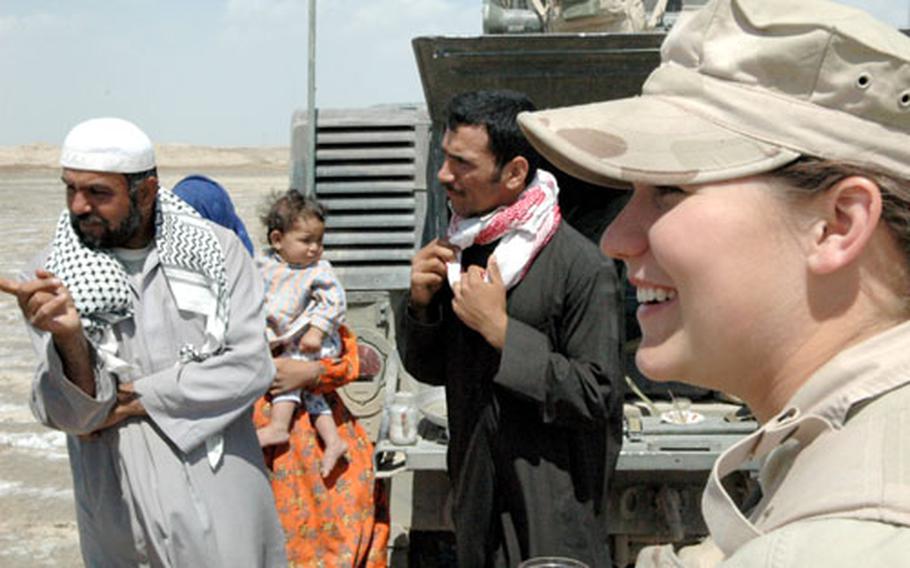 Airman Britney Simpson, 19, of Milan, Tenn., drinks chai during a visit with a Bedouin family near Ali Base. (Monte Morin / S&S) 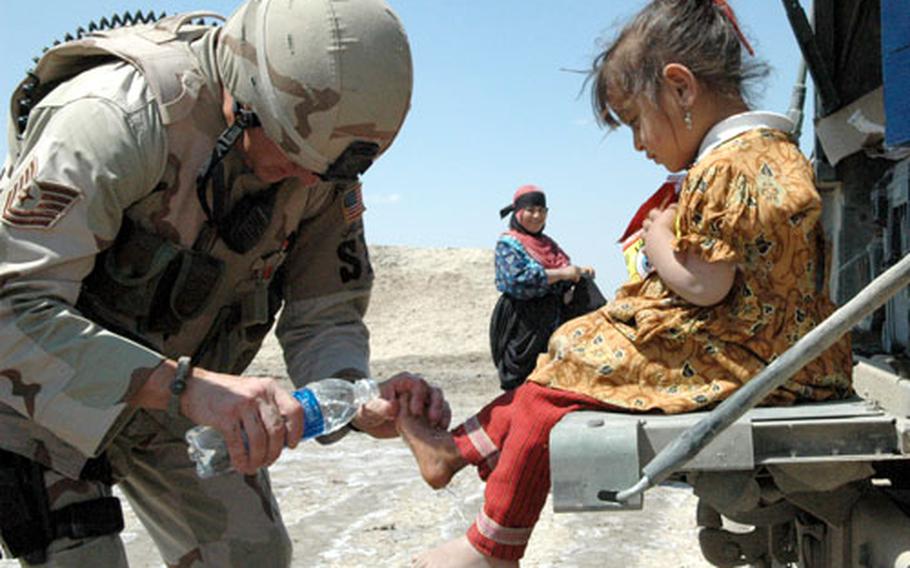 Tech. Sgt. Jeffrey Fort, 33, of Florissant, Mo., an Air Force patrol leader, treats a local child for cuts on her feet during a recent patrol outside Ali Base in Iraq. (Monte Morin / S&S) 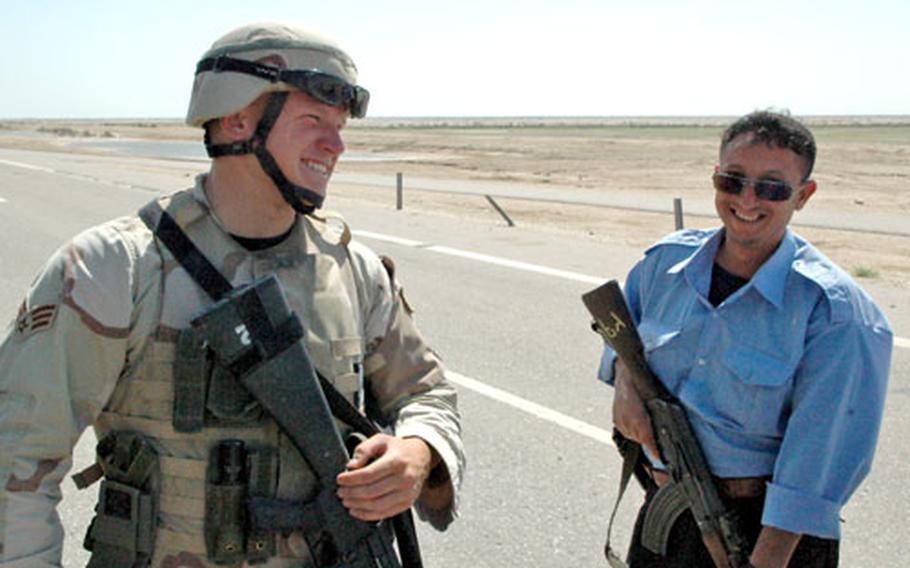 ALI BASE, Iraq &#8212; Senior Airman Aaron Giere had The Presidents of the United States of America on his mind.

It might have had something to do with the fact that Giere&#8217;s six-month tour with the 407th Expeditionary Security Forces Squadron was ending in a week.

&#8220;HEY! Stop singing that song,&#8221; shouted Tech. Sgt. Jeffrey Fort as he steered their Humvee through a slalom of concrete barriers.

As their Humvee rolled past a tangle of razor wire, electronic sensors and tripwires that surround the air base, Giere offered up one last verse from the song &#8220;Peaches.&#8221;

On this particular day last week, however, Giere and Fort were part of a two-vehicle, eight-airman patrol of Ali Base&#8217;s &#8220;SAM Footprint&#8221; &#8212; a vast expanse of desert adjacent to the installation&#8217;s flight line and the most likely area from which an insurgent might launch a surface-to-air missile.

Ali Base, known to most of the U.S. military as Tallil, exists in a relatively peaceful part of Iraq, so the air base security force has yet to experience such an attack.

Fort, the patrol leader, said he looks on the patrols as a deterrent.

In most cases, the patrols spend their time checking out suspicious-looking vehicles or people on nearby roadways, or chasing down local Iraqis who attempt to enter the base in order to scavenge from it&#8217;s scrap metal dump, or &#8220;bone yard.&#8221;

While airmen have yet to encounter an insurgent with a shoulder-fired missile, there have been reports of shots fired by snipers. They have also run across bombs and other ordnance scattered throughout the desert.

Giere&#8217;s patrol called in an explosives team who detonated the bomb where it sat.

During this particular patrol, Fort and the other airmen have been asked to keep a close eye on private security convoys traveling along the main supply route nearby. Several such convoys report that they were fired on by Iraqi police and Iraqi army personnel and returned fire. When U.S. patrols have followed up on the incidents, Iraqi forces have said they were the result of misunderstandings.

It&#8217;s unclear to Fort and the others exactly why these shootings have occurred, but they&#8217;re on top of the situation. Within a short time of leaving the base, Fort is leading both Humvees down the opposite lane of freeway traffic and pulling up beside a group of Iraqi highway patrol officers who are standing outside their vehicles at highway rest stop.

Air Force security patrols that venture out beyond an installation&#8217;s perimeter are a rarity, and security force airmen in the 407th say they&#8217;re lucky to have the opportunity. They say that while most of their fellow airmen are confined to jobs on base, patrolling airmen have an opportunity to meet Iraqis on their own turf.

Such was the case recently when Giere, Fort, Airman 1st Class Kristen Fluegel, 22, of Carlsbad, Calif., and Airman Britney Simpson, 19, of Milan, Tenn., pulled their truck up to the living area of a local Bedouin family. They have visited the family on a number of occasions, distributing food and small gifts to the children and parents, and treating a toddler girl for cuts on her feet.

Giere described the visits as the patrol&#8217;s own humanitarian project.