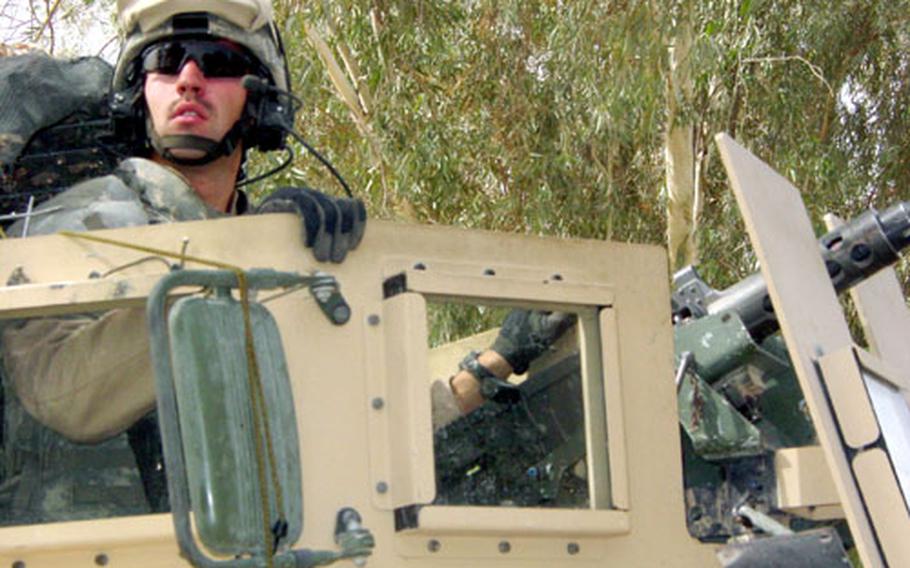 Air Force Senior Airman Joseph Ronchetto of the 732nd Expeditionary Security Forces Squadron&#39;s Detachment 3 sits in the turret of a Humvee on Thursday in Baghdad before heading out on a mission. (Scott Schonauer / S&S)

Air Force Senior Airman Joseph Ronchetto of the 732nd Expeditionary Security Forces Squadron&#39;s Detachment 3 sits in the turret of a Humvee on Thursday in Baghdad before heading out on a mission. (Scott Schonauer / S&S) 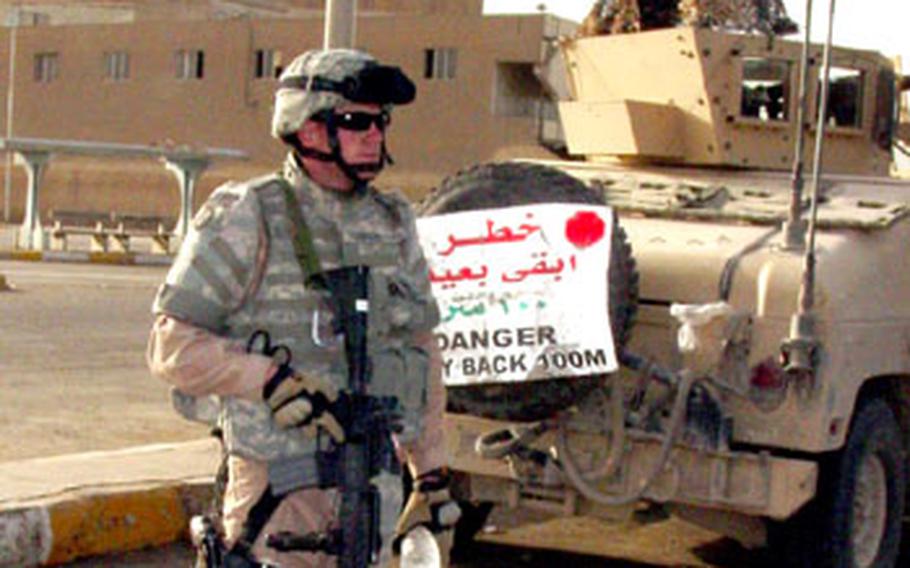 Air Force Staff Sgt. Travis Griffin from the 732nd Expeditionary Security Forces Squadron&#39;s Detachment 3 guards a Humvee at Baghdad&#39;s main bus station on Thursday. While most airmen serving in Iraq rarely venture outside the base, members of Detachment 3 go almost every day as part of the service&#39;s effort to fill jobs that have typically been done by the Army in Iraq. The Air Force calls them "in lieu of" taskings. (Scott Schonauer / S&S) 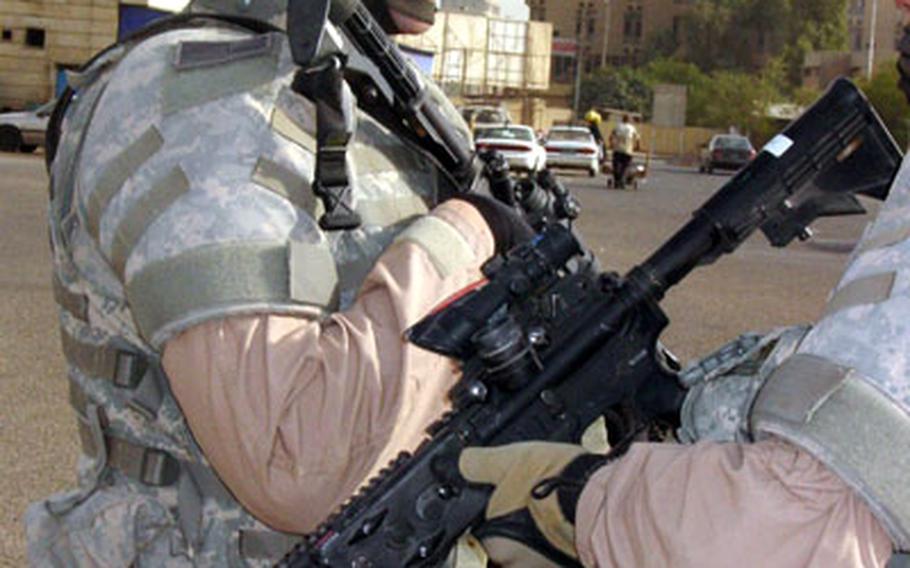 BAGHDAD &#8212; The crack of a gunshot echoed across the parking lot, but nobody flinched or ran for cover.

Some Iraqi families had reason to be happy. The Army was about to release 70 Shiite detainees at Baghdad&#8217;s main bus station, and airmen from the 732nd Expeditionary Security Forces Squadron were sweeping the parking lot for explosives before the arrival.

Seconds later, more shots. But nobody was celebrating.

An airman heard the snap of a bullet come within feet of his head. Turret gunners in the Humvees sunk a little deeper into their holes to protect themselves, while airmen on foot scanned the perimeter with their rifle scopes. They searched for a sniper lurking on the ledges of dilapidated, windowless buildings.

They never found the shooter, the gunfire disappeared and the squad left without a scratch, but it illustrated the risks this squadron faces daily. While Army and Marine units have confronted similar dangers in towns across Iraq numerous times, combat is something new for airmen more accustomed to defending bases and planes.

Airmen with the squadron&#8217;s Detachment 3 have one of the most dangerous jobs in the Air Force today, and they are shattering long-held stereotypes that their service is &#8220;soft&#8221; and unwilling to let their men and women go off base and into harm&#8217;s way. They are &#8220;the most heavily engaged Air Force ground unit that we&#8217;ve got,&#8221; said Col. Karl Bosworth, commander of the 732nd Air Expeditionary Group in Balad.

The Air Force has sent hundreds of airmen to Iraq to alleviate the strain on ground forces in a military operation in its fifth year. There are about 1,500 airmen doing jobs that are ordinarily done by the Army, from explosive ordnance disposal teams to escorting convoys. The Air Force calls them &#8220;in lieu of&#8221; missions, or ILO, because the airmen are filling in for soldiers.

While Air Force leaders have expressed concerns, the service plans to increase the number of airmen it is contributing to the Army in the next year.

All raised their hand

The majority of the 157 men and women who make up Detachment 3, nicknamed the &#8220;Shadows,&#8221; are military cops and come from 35 bases spread across the globe. Nobody ordered them to come. Every single one of them volunteered, from the commander to the 18-year-old airman months removed from boot camp. Some have never been deployed, and most of them left the important but boring job of guarding nuclear missile silos at U.S. bases for the chance to experience combat.

The detachment&#8217;s focus is to help build and train Iraqi police forces in Baghdad&#8217;s tenuous East Rashid district, a notoriously bad part of town due to its mixture of Sunni and Shiite clans.

The airmen will be in Iraq for a yearlong assignment, three times longer than the four months most airmen spend deployed. Their small camp within earshot of Baghdad International Airport and a couple miles from Camp Sather lacks many of the amenities and niceties Air Force bases are famous for. Showers and toilets don&#8217;t always work, and their &#8220;fitness tent&#8221; is still waiting for the machines to arrive.

But they don&#8217;t complain much about the living conditions. They acknowledge there is a smidgen of animosity toward their fellow airmen down the road and those farther north at Balad Air Base, where servicemembers enjoy large exchange stores and massive recreation facilities. They refer to them by the now popular wartime moniker &#8220;fobbits,&#8221; because those airmen rarely leave a forward operating base, or FOB.

On Thursday, the Iraqi government and coalition forces freed 500 detainees from jails across the country. Detachment 3 had a support role, providing security for the 70 detainees the Army dropped off at the bus station.

Staff Sgt. Travis Griffin drove in the lead Humvee on the operation. This is his second time to Iraq, but he wanted to return to do missions like this.

As his team&#8217;s Humvee led a convoy of four vehicles, turret gunner Senior Airman Joseph Ronchetto whipped out his iPod and played Metallica into the radio headset for everyone to hear. As they got closer to the base&#8217;s exit, the music stopped and driver Senior Airman Tony Maffel put on the brakes.

The men bowed their heads and Griffin recited a prayer over the radio before they left the friendly confines of the base to meet the possible hazards: roadside bombs, snipers and anybody else who wants to kill coalition forces.

While the number of attacks has gone down considerably in the city, it is still a tense ride and airmen are prepared for anything.

They stay loose by cracking jokes, but their attention never drifts. As they drive, they spot abandoned cars that could be packed with explosives and look for gunmen perched on rooftops.

Master Sgt. Eric Hein, 38, is unlike some of the younger airmen in his squad because he has deployed to Third World countries in Africa and elsewhere. The Army mission is nothing new to him either. He was only the 105th airman in history to complete the Army&#8217;s rigorous Ranger training school. For airmen to survive in an unfamiliar and hostile environment, he said many of them in Detachment 3 will have to act like soldiers.

Before Griffin&#8217;s squad headed downtown, members expressed concern that none of the detainees were Sunni. They feared that some Sunnis might crash the release party, angry their men weren&#8217;t freed. When the airmen got there, they warned each other to watch the mosque overlooking the parking lot where the detainees would be brought. Most didn&#8217;t know the mosque is Sunni.

As an Air Force military working dog sniffed out every car, Griffin and the others in the squad watched the perimeter. That&#8217;s when the shots came out of nowhere.

Nobody was hurt and the mission got done, but it was a reminder that some people have them in the cross hairs. Branch of service doesn&#8217;t matter.

BAGHDAD &#8212; Combat has taken its toll on some Marines and soldiers, and there are concerns that these airmen will be forced to endure the same lingering effects of the stress that comes with being in a war zone for months.

A previous group of airmen, nicknamed the &#8220;Wildcards,&#8221; lost two airmen during their deployment and had many more wounded. Some are still adjusting to being home. More than 50 percent got hit by a roadside bomb, said Col. Karl Bosworth, commander of 732nd Air Expeditionary Group in Balad. During their missions, they picked up more than 2,000 dead bodies just in their district.

The Air Force wasn&#8217;t prepared to handle the number of airmen with post-traumatic stress, and it forced leaders in Washington to overhaul the service&#8217;s entire program. It has modeled the new screening and treatment program on the Army&#8217;s because of the last unit.

&#8220;We figured we had to take care of these airmen in the same way the Army is taking care of its soldiers,&#8221; Bosworth said.

Airmen with Detachment 3 go outside the base wire knowing they could end up like their predecessors. But they said they are motivated by the chance to earn some respect from their brethren in the Army and the Marine Corps, and by the shot at accomplishing something more tangible than standing guard over a plane or a missile silo.

Their first goal is for everyone to come home safe. Their second is to do a mission few could have imagined the Air Force doing years ago.