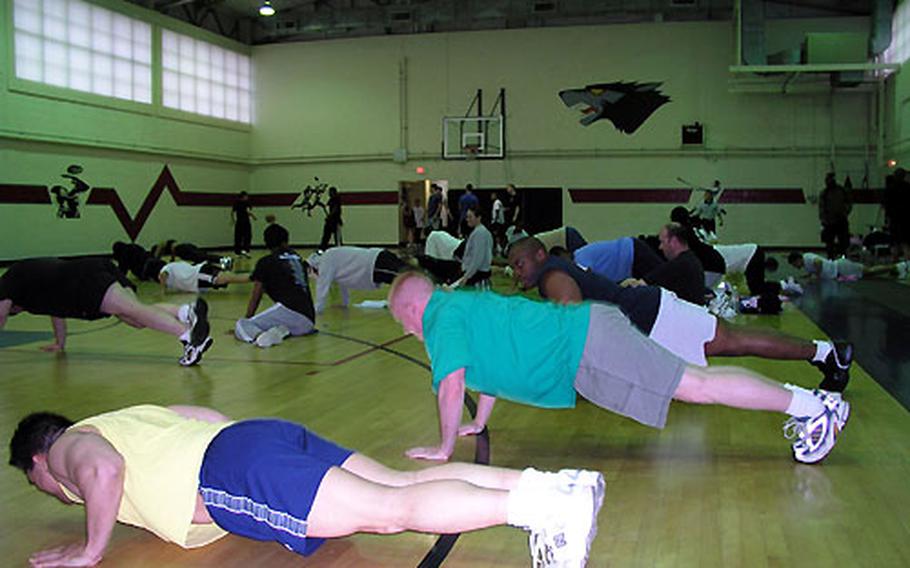 Airmen at Kunsan Air Base in South Korea continue making the adjustment to the tougher new Air Force fitness standards introduced in January. These airmen are going through the push-up segment of their unit physical training session Monday. (Franklin Fisher / S&S)

Airmen at Kunsan Air Base in South Korea continue making the adjustment to the tougher new Air Force fitness standards introduced in January. These airmen are going through the push-up segment of their unit physical training session Monday. (Franklin Fisher / S&S) 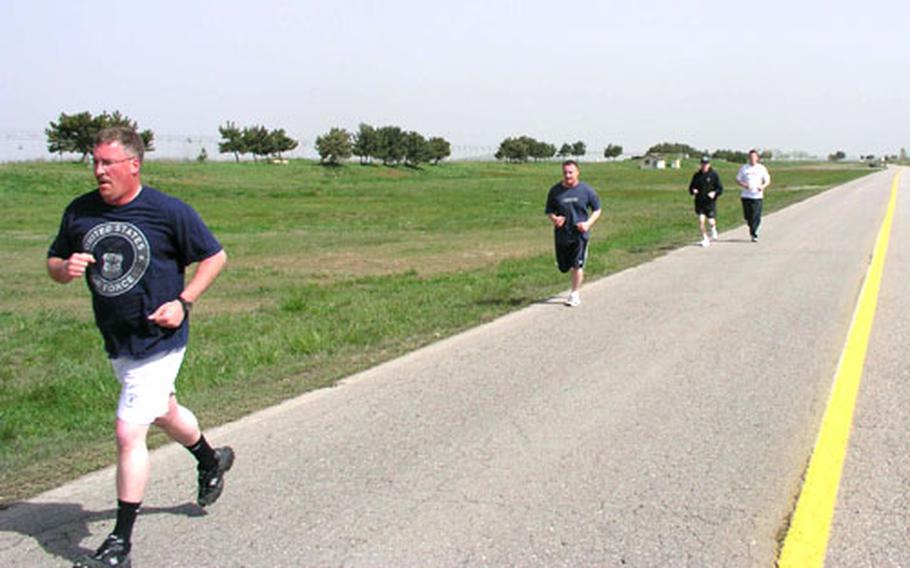 Kunsan Air Base, South Korea, personnel get in a run on a sunny Tuesday morning. Throughout the base, home to the 8th Fighter Wing, groups of airmen can be seen running or working out in the base gym, all part of the wing’s efforts to have airmen meet the tougher new Air Force fitness standards that took effect in January. (Franklin Fisher / S&S)

KUNSAN AIR BASE, South Korea &#8212; It&#8217;s a rainy Monday afternoon here and the base gym is jammed with airmen doing push-ups, lifting weights, shooting baskets and running on the treadmill.

Every room is crowded, and in some, nearly every machine or workout station seems occupied.

But these fitness enthusiasts didn&#8217;t just show up at the gym around the same time to get in an afternoon workout. This was official U.S. Air Force business.

The Air Force toughened its physical fitness standards in January, requiring airmen to perform PT at least three times a week while making push-ups, sit-ups and a 1.5-mile run the core of the program.

For airmen struggling with the new standards, the toughest part is hardly a secret.

Because the 8th Fighter Wing initiated a training program several months before the official January debut of the new standards, many airmen are doing well, some already comfortable running two miles or more.

But others have come to Kunsan only recently, and from bases where no early workout regimen was in place. &#8220;We encourage them to take it slow at first,&#8221; Talbot said.

But Harris stays with it because she thinks that airmen can&#8217;t afford to be out of shape, especially when they&#8217;re subject to deployments to world trouble spots in the post-Sept. 11 era.