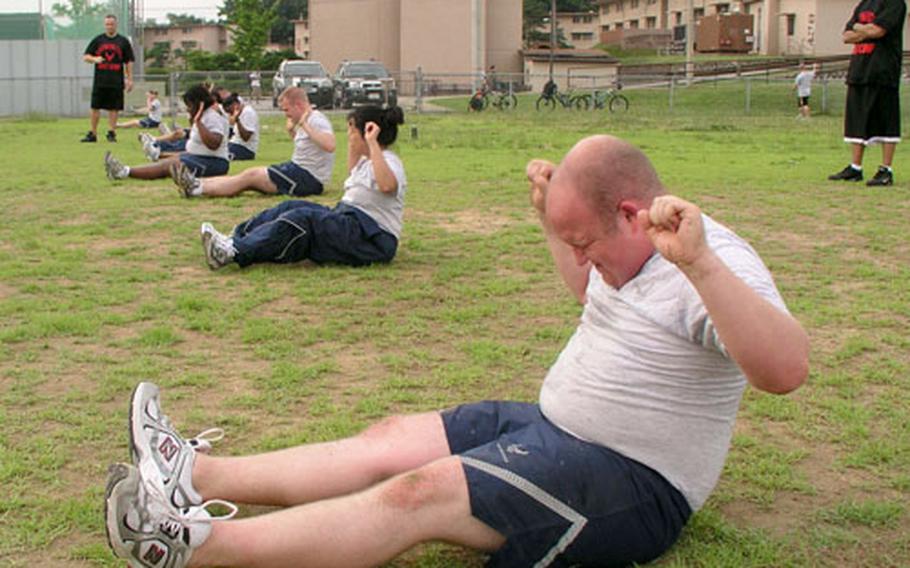 See an audio slideshow about the "PT Boot Camp" here.

OSAN AIR BASE, South Korea &#8212; The heavy sweating and the huffing and puffing haven&#8217;t started quite yet, but fitness instructors are taking their places.

"Will that be combo meal, sir?"

One of the physical training instructors reminds airmen the weekend is over and whatever beer and pizza they may have given in to is about to exact its revenge.

The men and women are taking part in Osan&#8217;s "PT Boot Camp," which started June 16 and ends July 25. It&#8217;s an intensive program put together for airmen who&#8217;ve flunked their Air Force fitness test twice and have been placed in the Fitness Improvement Program.

About 90 percent of the group are here because they have to be. Others are taking part voluntarily.

They meet Mondays through Thursdays at 4:45 p.m. for an hour of PT &#8212; stretches, push-ups, sit-ups, running and other exercises. Nutrition classes provided by the base Health and Wellness Center also come into play.

Intensive, remedial boot camp-style fitness programs are not uncommon in the military. Bases throughout the Pacific and elsewhere maintain a range of mandatory and voluntary offerings.

"All right. Ya&#8217;ll motivated?" fitness instructor Tech. Sgt. Gary Knight asks the Osan class. He announces that the next exercise will be Barbie Doll leg lifts.

"Everybody get your heads up," Sanger tells them. "I&#8217;ll show you what the Barbie Doll position is."

Knight and the other instructors keep close watch on their charges.

Then, "On your feet!" for jumping jacks.

The day ends with a run.

"Our intent is not to hurt anybody," Wilburn said. "Our whole intent is to get them in shape to pass that PT test, whether it&#8217;s the push-ups, the sit-ups, or the running &#8230; Our goal is to get them to lose two pounds a week. So in six weeks, if they lost 12 pounds, my gosh, that would be wonderful."

See an audio slideshow about the "PT Boot Camp" here.