Airmen, spouses at Misawa are given guidance on dealing with deployments 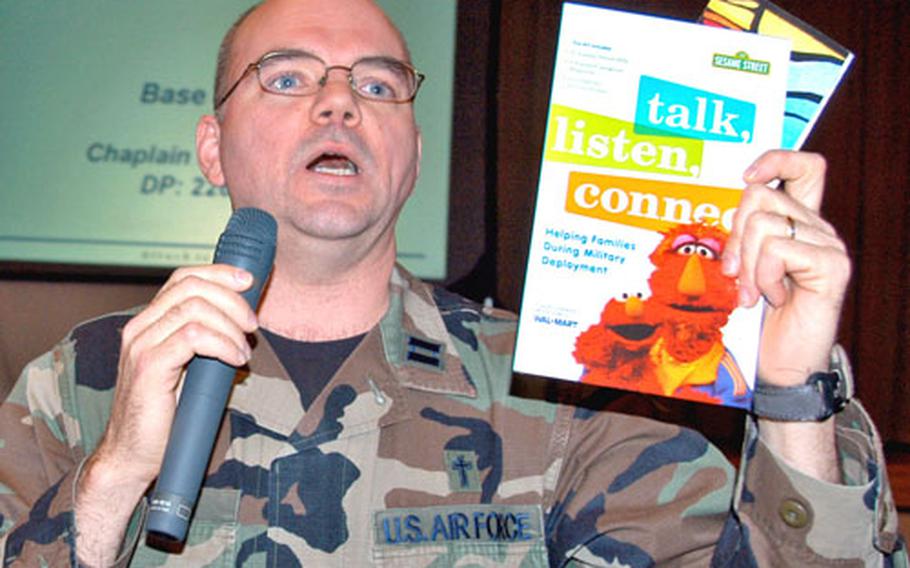 Capt. John Sackett, a base chaplain at Misawa Air Base, Japan, holds up a Sesame Street video available at the chapel intended to help kids cope with deployment. Sackett spoke Thursday night at a deployment briefing for airmen and spouses from the 35th Maintenance Group. (Jennifer H. Svan / S&S)

Capt. John Sackett, a base chaplain at Misawa Air Base, Japan, holds up a Sesame Street video available at the chapel intended to help kids cope with deployment. Sackett spoke Thursday night at a deployment briefing for airmen and spouses from the 35th Maintenance Group. (Jennifer H. Svan / S&S) 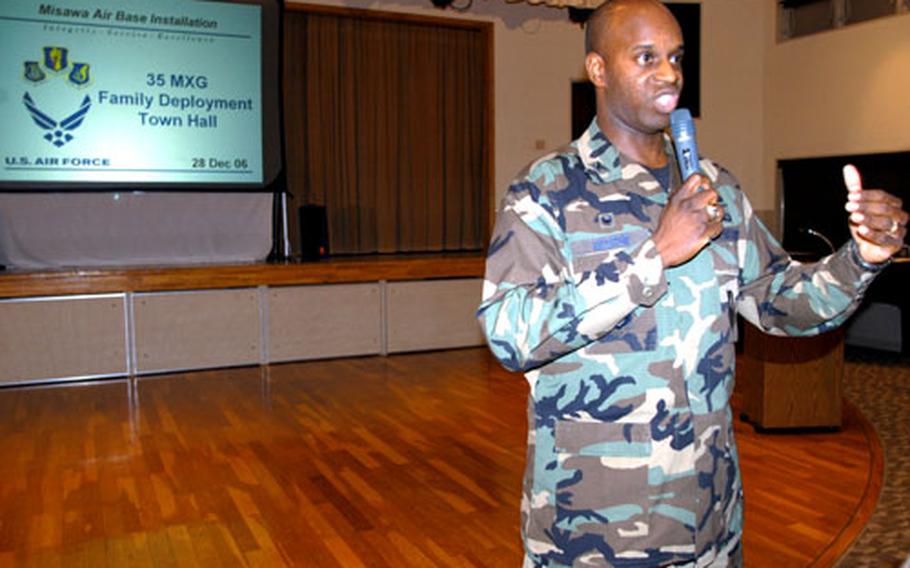 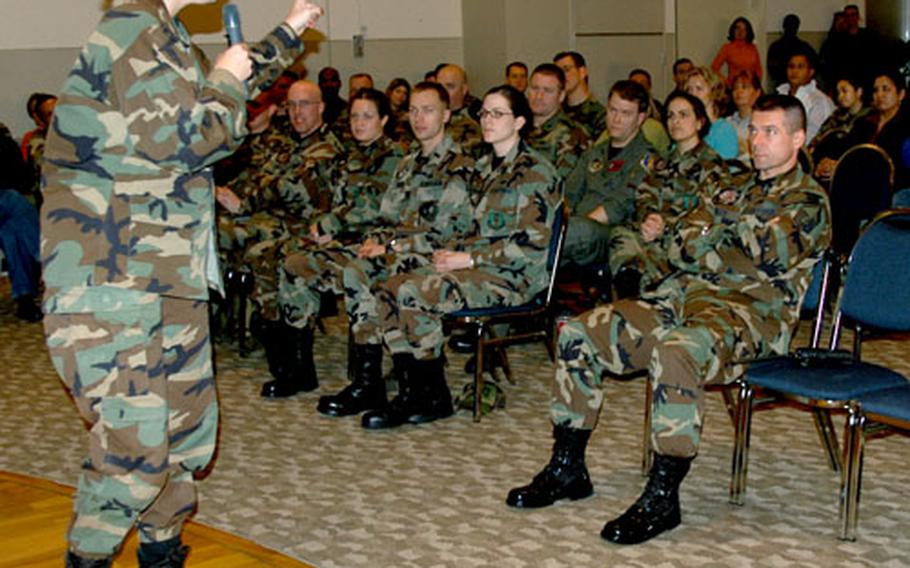 MISAWA AIR BASE, Japan &#8212; Cheryl Cameron has tended the home fire before while her husband deployed. She&#8217;s getting ready to once again slip into that role of the strong single mom when Master Sgt. Charles Cameron, the 14th Aircraft Maintenance Unit&#8217;s first sergeant, heads to Iraq with the 14th Fighter Squadron next month.

At a deployment briefing Thursday night for 35th Maintenance Group airmen and spouses, her advice to those who soon will be left was: &#8220;The first 24 hours, cry, eat the Oreos, whipped cream &#8230; but after that, what we do in our house, we just suck it up and deal with it. You can have your bad days, but don&#8217;t let them be every day.&#8221;

The 35th Maintenance Group is getting ready to send more than 250 of its nearly 1,200 airmen to war. The group&#8217;s three squadrons will support pilots and F-16s from Misawa&#8217;s 14th Fighter Squadron during the January-to-April Aerospace Expeditionary Force rotation. It&#8217;s the group&#8217;s largest deployment in at least a year and the first of two major tours slated for 2007, said Col. Cedric George, 35th Maintenance Group commander.

The commander told a packed house at the Mokuteki Community Center ballroom that first sergeants, commanders and readiness assistant volunteers would be available to address any concern, need or question, however small, from airmen or spouses. That&#8217;s whom people should contact if they need help and, likewise, those individuals will make an effort to reach out to every person in the group, George said.

Readiness assistant volunteers &#8212; spouses of airmen who serve as a link between the squadron and the families &#8212; maintain a phone tree and will contact families on a regular basis throughout the deployment, Cameron said. They&#8217;ll also organize outings, such as Sunday brunch at the club or shopping out in town, she said.

Vernita Beach, a spouse who is seven months pregnant as husband Staff Sgt. Quinton Beach prepares for his first deployment, asked about attaining a birth certificate and passport for her newborn. The birth certificate shouldn&#8217;t be a problem, a military lawyer told her, but she&#8217;ll probably need a special power of attorney for the passport since both parents have to sign for that.

Beach said the briefing helped ease her panic &#8220;about having a baby by myself in the middle of Japan.&#8221;

Families were encouraged to seek help if they need it.

On an upbeat note, she reminded spouses that even though deployments are tough, research shows that &#8220;most people do just great. You can do this. This is what we do in the military and we are good at it.&#8221;