Buy Photo
Staff Sgt. Chris Hofer, a loadmaster from Yokota Air Base, prepares a box of Operation Christmas Drop donations on board a C-130 Super Herc on Dec. 9, 2018. (Caitlin Doornbos/Stars and Stripes)

Buy Photo
Staff Sgt. Chris Hofer, a loadmaster from Yokota Air Base, prepares a box of Operation Christmas Drop donations on board a C-130 Super Herc on Dec. 9, 2018. (Caitlin Doornbos/Stars and Stripes) Buy Photo
Airmen from Yokota Air Base delivered boxes of donations this week to remote islands like this one during Operation Christmas Drop. (Caitlin Doornbos/Stars and Stripes) 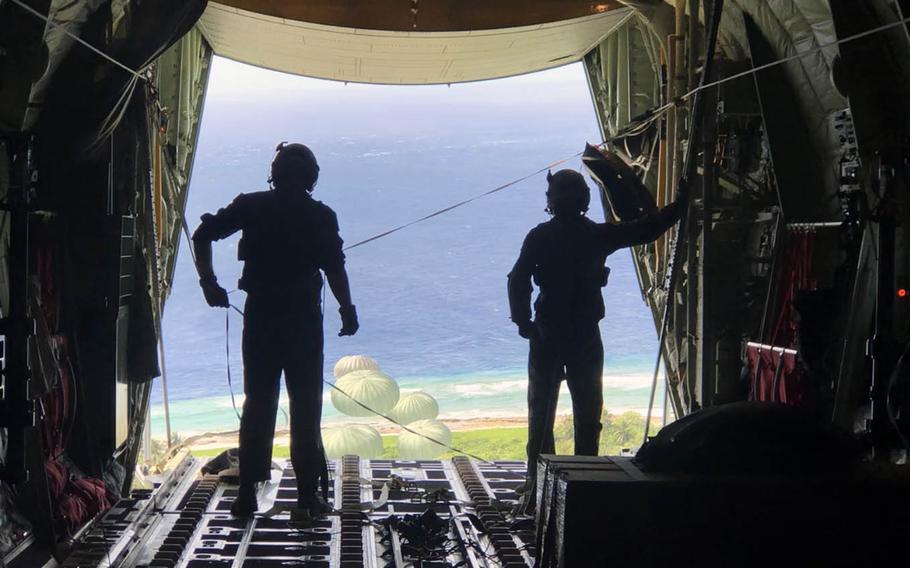 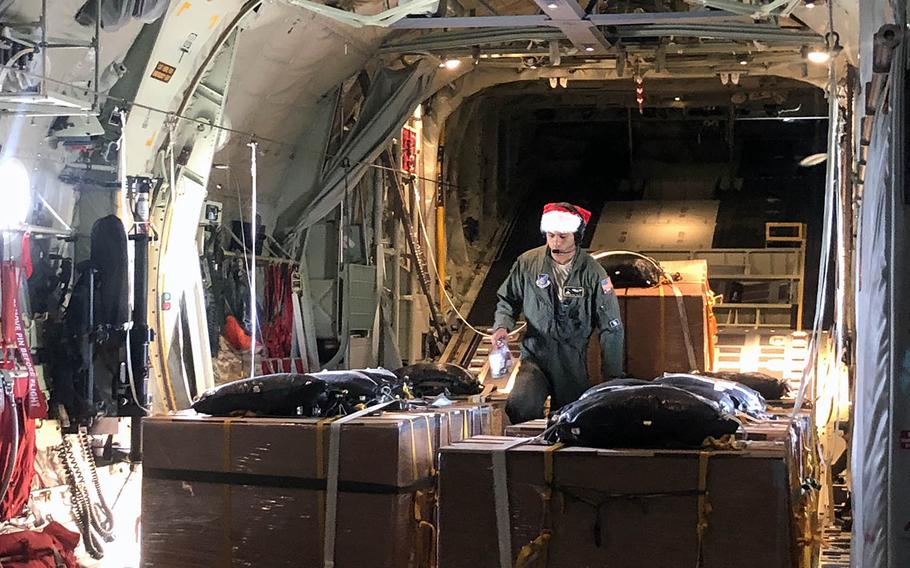 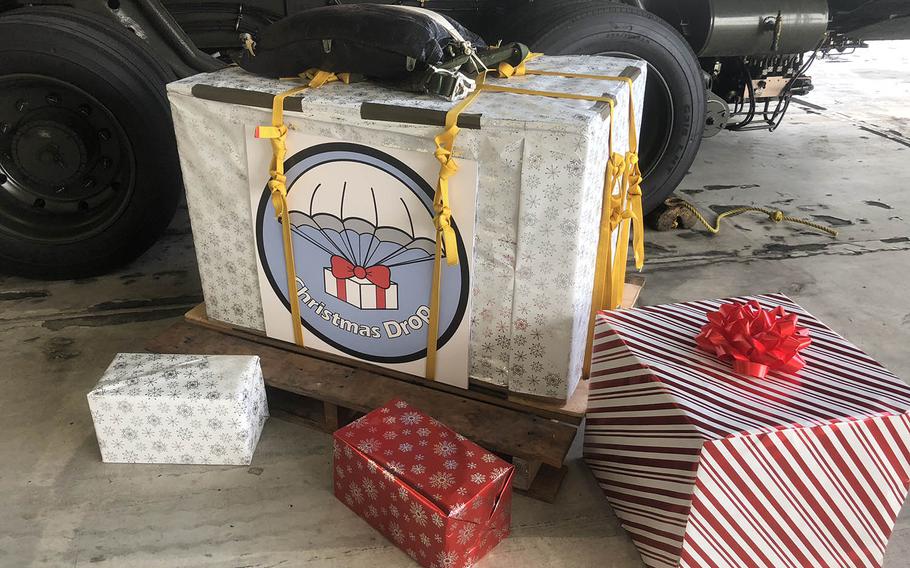 Buy Photo
A box of Operation Christmas Drop donations was wrapped in Christmas paper for a special ceremony for servicemembers, volunteers and regional leaders. (Caitlin Doornbos/Stars and Stripes) Buy Photo
Hundreds of servicemembers and Guam residents packed 143 wooden boxes with donations Dec. 8 to be dropped by parachute to island residents during Operation Christmas Drop. (Caitlin Doornbos/Stars and Stripes) Buy Photo
A C-130 pilot wears a Santa hat and an Operation Christmas Drop patch during a flight over the Northern Marianas Islands. (Caitlin Doornbos/Stars and Stripes)

ANDERSEN AIR FORCE BASE, Guam — A measure of relief went into Operation Christmas Drop this year for residents of far-flung and sometimes inaccessible islands of the Northern Marianas, who in October endured one of history’s most powerful typhoons.

Most of this year’s donation boxes — filled by civilians from Guam and servicemembers from Australia, Japan and the United States — are going to islands near Saipan and Tinian. Typhoon Yutu battered those islands with 180 mph winds, flattening many of the islanders’ homes.

Operation Christmas Drop — now in its 67th year — will help about 30,000 people on 56 islands across the Marianas, a U.S. commonwealth, as airmen push donation boxes on parachutes out the backs of C-130J Super Hercules aircraft this week.

Tucked among the gifts of food, clothing and toys parachuted from the holds of cargo aircraft were tools and building supplies to help them recover.

“They are in the middle of the Pacific. There’s no way there’s going to be communication for them; transportation is difficult,” said Bruce Best, who has worked with the islanders for the past 40 years. “It might be five months before they get a boat out there [with aid.]”

Inside a hangar Saturday at Andersen, holiday cheer energized hundreds of volunteers as they packed 143 wooden boxes with about $40,000 worth of donations.

Packing the boxes was a family affair for Kris Goertzman, of Guam. She and her airman husband brought their 2-, 4- and 10-year-old sons with them to carefully place donations into the boxes.

“I want my kids to see us giving back,” she said. “It’s important to set that example for them.”

Event leaders call out each item in a precise order, for each box must be packed correctly, within weight limits and with heavy items on the bottom.

Airman Kaison Simien, of Andersen, said he was excited for the island residents to receive the fun and the essential items in the boxes, from canned food, toiletries, medicine and toys to clothing, fishing and diving supplies.

“I always give my stuff away, so when I’m able to do it on this big of a scale, it’s great,” Simien said. “I remember opening presents on Christmas morning. I can only imagine if a whole box dropped from the sky.”

Capt. Patrick Steppe, of Yokota Air Base in western Tokyo, said the chance to pack the boxes he and his team would later drop from above offered a personal touch.

“You actually feel like you’re contributing to these people who don’t have anything,” he said. “It’s a nice little touch to be like, ‘I picked this item for you.’”

The recipients live on some of the most remote islands in the world, Best told Stars and Stripes. He installed a system of radio networks in the area to connect the isolated people to the outside world.

These islanders are still coping with Yutu’s lingering devastation.

The islanders exemplify sustainable living, using each piece of the donation boxes — from the food, tools, clothing and toys inside to the parachute and rope tying the box together.

The deliveries began Sunday as airmen in Santa hats spent the morning loading the plastic-wrapped wooden pallets onto the Super Hercs.

As a Super Herc passed over an island, two loadmasters opened the cargo door and pushed donation boxes to the edge.

The pilot positioned the plane over a pre-designated drop point and the load master let the boxes roll off the Super Herc.

Each box was topped with a low-cost, low-altitude parachute system, which is rigged to a cord in the plane. As each box falls from the plane, the cord pulls the parachute open and the box floats onto the island or splashes into shallow water nearby.

The islanders wait on milelong slivers of land covered in palm trees and dotted with shacks, waving at the aircraft above.

Loadmaster Staff Sgt. Chris Hofer said he had been waiting years to take part in Operation Christmas Drop. He finally got the chance this year. The event provides real-world opportunity to employ the skills he practices regularly, he said.

“We’re using the full spectrum of everything you do in this job,” Hofer said.

Monday, airmen from the U.S., Philippines, Australia and Japan mingled at a ceremony celebrating the event as an Air Force band made the atmosphere jolly with Christmas tunes.

At the ceremony, Best thanked volunteers and servicemembers for their work.

“This is what Christmas is for [the islanders],” he said. “When they hear the rumble of the plane engines, that’s Christmas.”