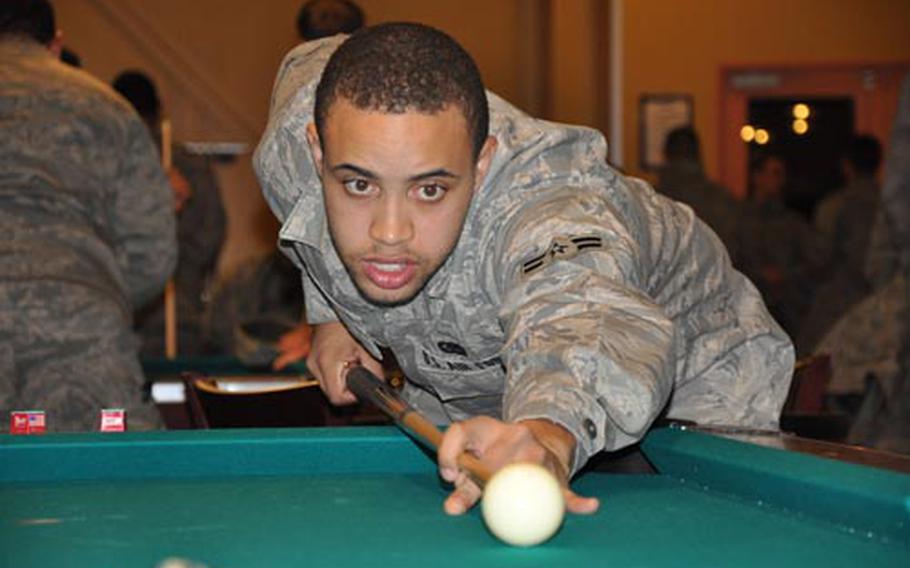 Airman 1st Class Doctavious French, with the 35th Logistical Readiness Squadron, shoots a game of pool during an open house at the $1.3 million Airmen Center on Thursday at Misawa Air Base, Japan. The center, for any military member in the ranks of E-1 to E-4, opened officially Friday night. (T.D. Flack / S&S)

Community members were treated to a sneak peek of the $1.3 million Airmen&#8217;s Center during an open house Thursday afternoon.

The center, a converted warehouse across the street from the base club, features multiple computer gaming systems, a 16-foot-by-9-foot projection screen, a dance floor and sound system, pool tables, air hockey and a stage with musical instruments.

Lt. Col. Jeffrey Lanning, 35th Mission Support Group deputy commander, told the crowd gathered for the open house that the center was the "realization of a dream."

Officials said the center will serve beer on Friday and Saturday nights, but they&#8217;re not trying to replace the base club.

"I don&#8217;t expect alcohol to be the highlight of this center," said Ben Furqueron, Community Services Flight chief with the 35th Force Support Squadron.

He said the goal was to develop a place where the troops would want to hang out and relax with peers without having to go to the bars.

Airman 1st Class Cameron Mackey was one of the first patrons when the center opened Friday night.

Mackey thinks the big screen display will be popular with sports enthusiasts.