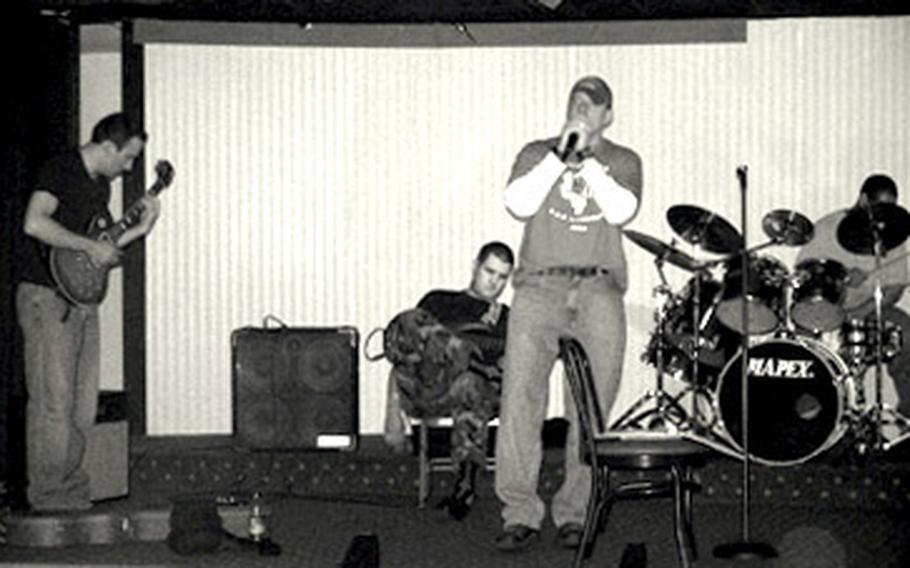 Nebulous, a band made up of airmen from RAF Alconbury, practices at the base&#39;s community center. (Bryan Mitchell / S&S)

But Nebulous is far from your everyday up-and-coming rock band.

And soon enough, band members say, they hope to have the record label spot to back that up.

So in this age of instant music downloading, podcasts and live rock shows beamed over the Internet, Thedford did what any entrepreneurial musician would do: he sent out a mass e-mail.

The duo was flooded with applicants and held a series of informal auditions that whittled the aspiring rockers down to a five-person band.

The band &#8212; which strives for an alternative rock sound a la Pearl Jam and the Red Hot Chili Peppers &#8212; is led by Thedford, a 29-year-old Texas native who writes the songs, sings lead vocals and chimes in with his guitar.

The computer system administrator learned to play at a young age, picking up chords watching his father and grandfather play guitar. His love of music and athletics led Thedford to a rare opportunity: playing high school football and performing in the marching band &#8212; in the same night.

Now the married father of two leaves the athletics to the kids and focuses full-time on music &#8212; with promising results thus far.

The band played a June 10 gig at the RAF Alconbury Community Center for an audience that included a representative from a Scottish record label. Thedford received positive feedback from Little Isle Records after the show, he said.

Little Isle Record representative Dee Reynolds trumpeted the band and its leaders in a press release distributed prior to the June 10 gig.

The band continues to jam weekly at the RAF Alconbury Community Center as it prepares for a set of live gigs. Nebulous is slated to headline the base July Fourth celebration and will be one of 30-some bands performing at a music festival July 17-19 in Huntington.

Thedford said the band&#8217;s American sound and sensibility separates it from the British rock scene and will hopefully help establish the quintet in the larger music world.