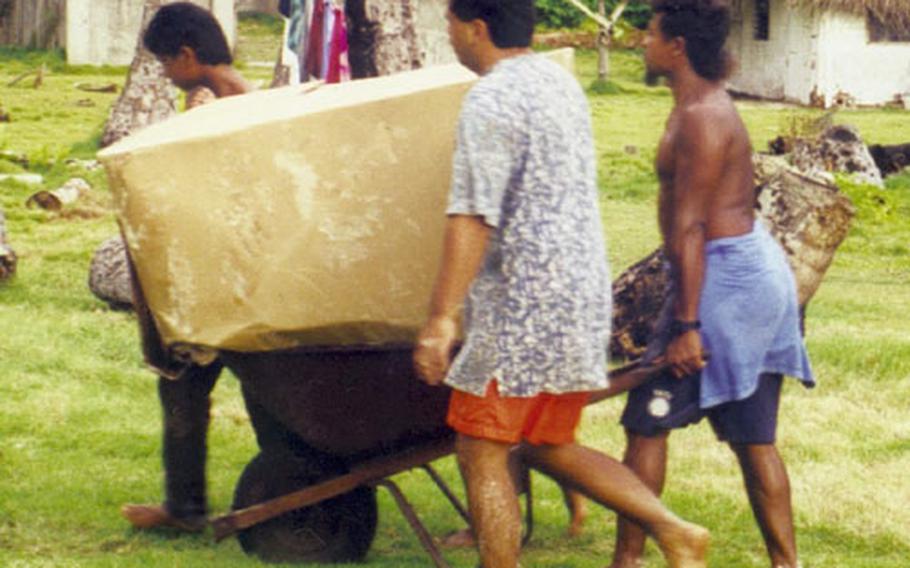 ANDERSEN AIR FORCE BASE, Guam &#8212; While U.S. shoppers begin elbowing their way through shopping malls to buy Christmas presents, airmen here are gearing up to deliver items to Pacific islanders who can only dream of department stores.

The U.S. (Uncle Santa, in this case) Air Force is collecting donations for the 53rd annual Operation Christmas Drop &#8212; the longest-running organized airdrop in the world. The items are to be delivered Dec. 4, Dec. 5 and Dec. 6 by three C-130s dispatched by the 36th Airlift Squadron.

The drop zones include 55 remote islands in the Federated States of Micronesia, Palau and the Northern Marianas.

The islands selected for the drop are the most remote, said Bruce Best, manager of the University of Guam&#8217;s PEACESAT Network center, a satellite communications hub for Micronesia that&#8217;s helped coordinate the Christmas Drop for more than 20 years.

During the past two years typhoons and other mission priorities have prevented the group from dropping to all the targeted islands.

Cash donations are also welcome and are used to make sure the islands get similar allotments.

The islanders especially appreciate fishing gear, masks, fins and snorkels, so they can have the tools needed to feed themselves, he said.

While 1952 is the commonly accepted year of the first Christmas Drop, John Treiber, 36th Air Expeditionary Wing historian, isn&#8217;t so sure.

The traditional story is that in 1952, a crew aboard a 54th Weather Reconnaissance Squadron WB-50 out of Andersen dropped a canister of goodies they happened to have on board to a group of islanders on Kapingamarangi, one of the outer islands in Pohnpei state in the Federated States of Micronesia.

But Treiber can find no evidence in historical archives that document the incident. He was able to find a 1952 story about an Andersen airman who bought $10 worth of candy and personally delivered it to children in Saipan, however.

A story Andersen&#8217;s newspaper published in 1957 states the drop began in 1947, when wives of 514th Recon Squadron crewmembers put together packages of clothes, books and other goodies to drop to islanders their husbands had reported seeing on flights over the vast region.

Among the many donors this year, Andersen&#8217;s spouses club is contributing $3,000 and the island&#8217;s Navy spouses group are donating proceeds of a recent crafts fair.

But to the remote islanders who receive the drops, said Best, &#8220;This is the biggest thing in their life all year.&#8221;

Where to give on Guam

Donations for the annual Christmas Drop are being accepted on Guam through Nov. 30 at the Air Force and Navy base exchanges and off base at Cost-U-Less, Guam Premium Outlets, Micronesia Mall, Payless Supermarkets, Guam Tropical Dive Station, Micronesia Dive Station, Ace Hardware and Marks Sporting Goods.