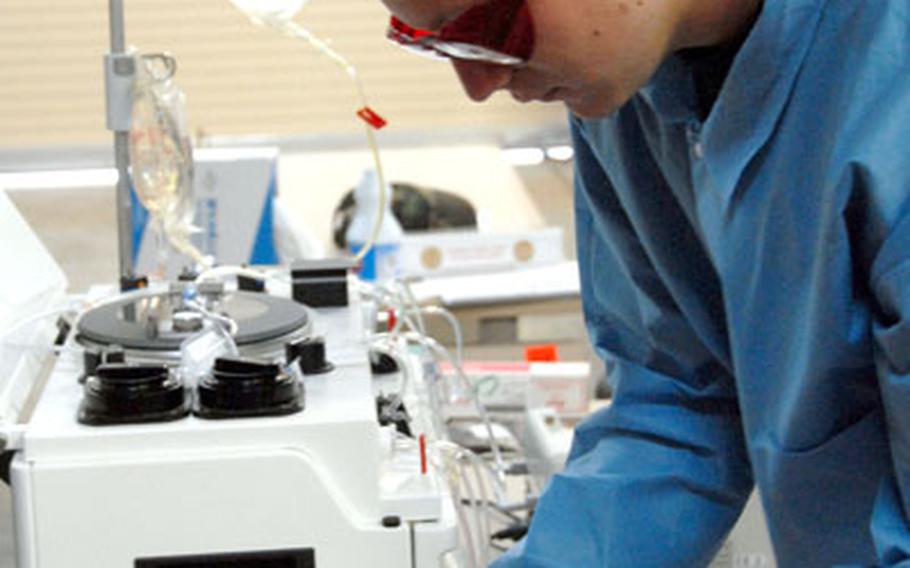 KUNSAN AIR BASE, South Korea &#8212; Inside a quiet warehouse on this air base, a group of airmen are in the grisly-sounding business of washing old blood.

They start with a frozen package of blood, unusable because it was preserved with glycerol when it was donated maybe 10 or 15 years ago. They hook it to a white machine the size of a computer monitor that, for an hour, pulls out the glycerol.

Right now, the airmen run blood through the machines only for practice. But if the base was attacked, the blood could be thawed and used immediately, filling in the seven- to 10-day gap before shipments of blood from the States would arrive.

&#8220;We can&#8217;t get the blood supply out here quick enough,&#8221; said Lt. William Chalmers, chief of laboratory services at Kunsan, which has three massive freezers stocked with 750 units of frozen blood.

Before Kunsan got the $50,000 machines about a year and a half ago, airmen had to clean the blood by hand.

After the blood is cleaned, airmen add a human-friendly preservative that extends its shelf life from two to seven days.

Kunsan and Osan Air Base, both in South Korea, are the only two air bases in the Pacific with frozen blood banks. Three Army bases also have frozen blood facilities.