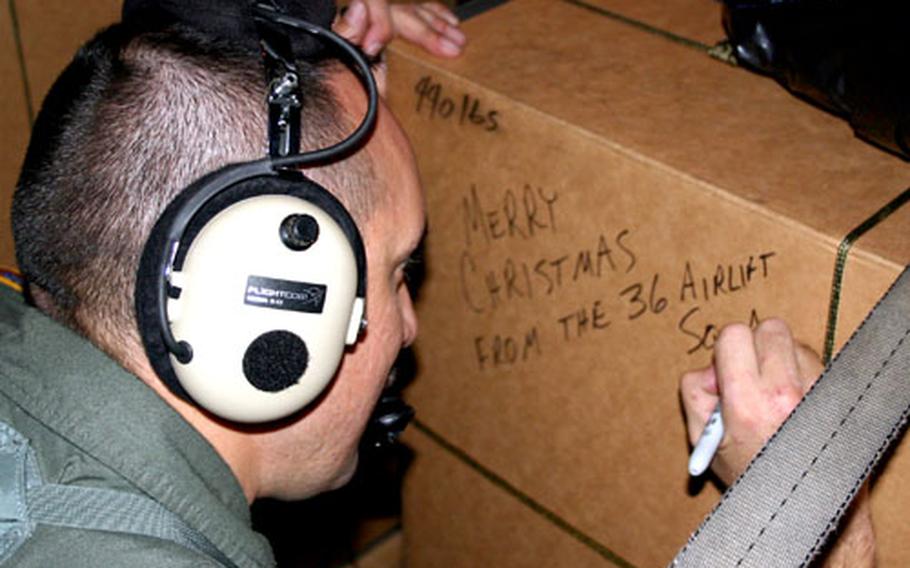 Master Sgt. Kevin Saquilan, a loadmaster, writes a Christmas message on one of the boxes to be dropped to residents of the outer islands of Chuuk State on the Federated States of Micronesia. The box later was parachuted as part of the 2005 Christmas Drop from a C-130 transport plane crewed by members of the 36th Airlift Squadron of the 374th Airlift Wing based in Yokota Air Base, Japan. (Frank Whitman / Special to S&S)

Master Sgt. Kevin Saquilan, a loadmaster, writes a Christmas message on one of the boxes to be dropped to residents of the outer islands of Chuuk State on the Federated States of Micronesia. The box later was parachuted as part of the 2005 Christmas Drop from a C-130 transport plane crewed by members of the 36th Airlift Squadron of the 374th Airlift Wing based in Yokota Air Base, Japan. (Frank Whitman / Special to S&S) 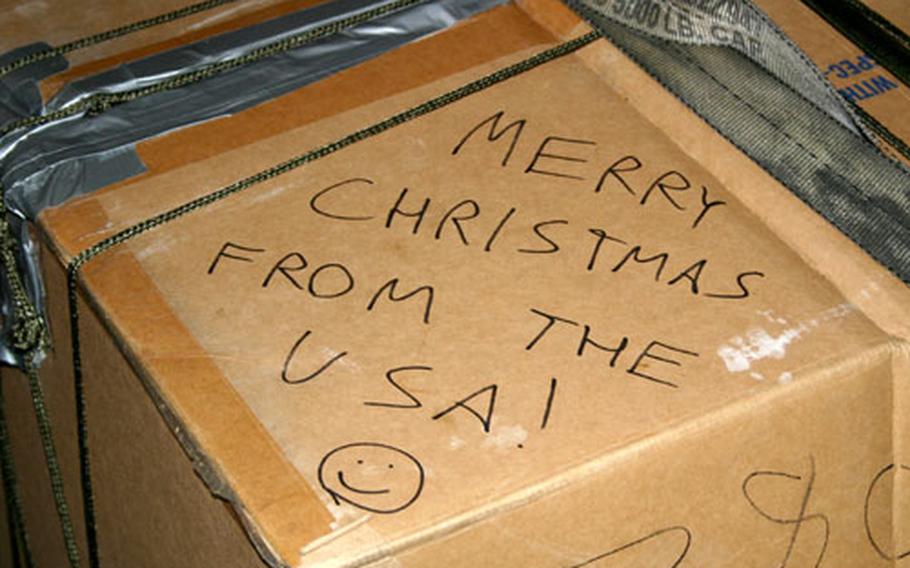 One of the 55 boxes packed for the 2005 Christmas Drop bears a message written by one of dozens of volunteers on Andersen Air Force Base, Guam, who packed the boxes to be dropped earlier this week to residents of remote Micronesian islands. (Frank Whitman / Special to S&S) 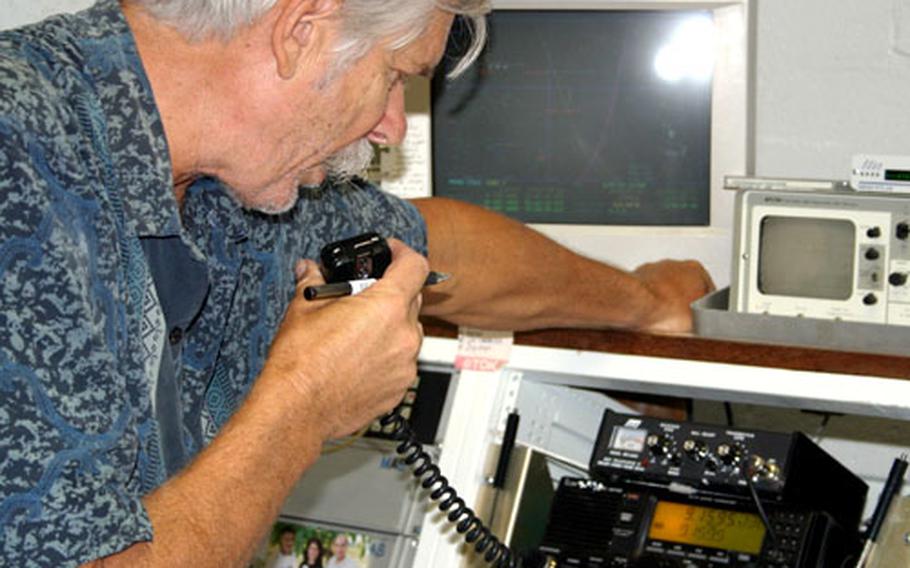 Bruce Best, manager of the PeaceSat communication station at the University of Guam, communicates with planes and islanders to coordinate the 2005 Christmas Drop. (Frank Whitman / Special to S&S) 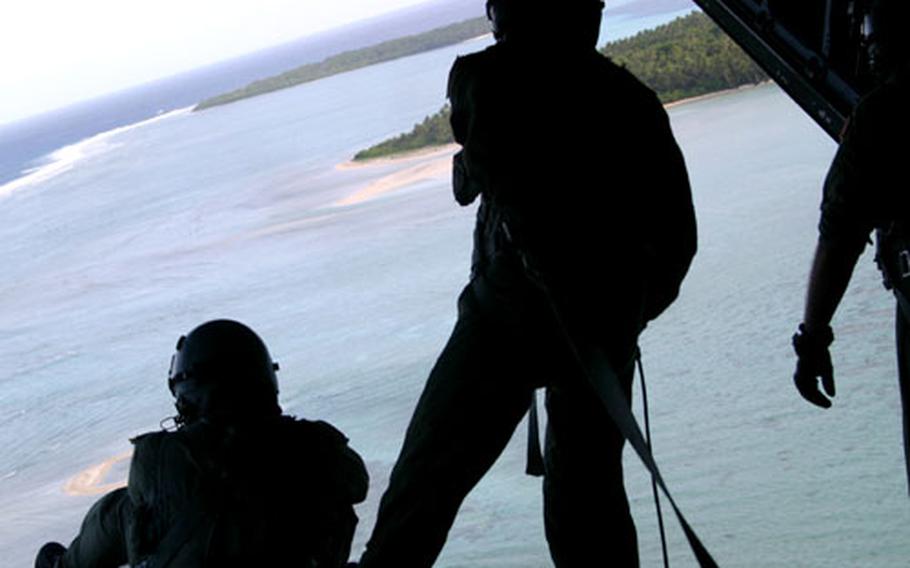 Tech. Sgt. Walter Fujioka, left, and Master Sgt. Kevin Saquilan watch islanders retrieve the boxes they just dropped out of their C-130 during the 2005 Christmas Drop out of Andersen Air Force Base, Guam. (Frank Whitman / Special to S&S) 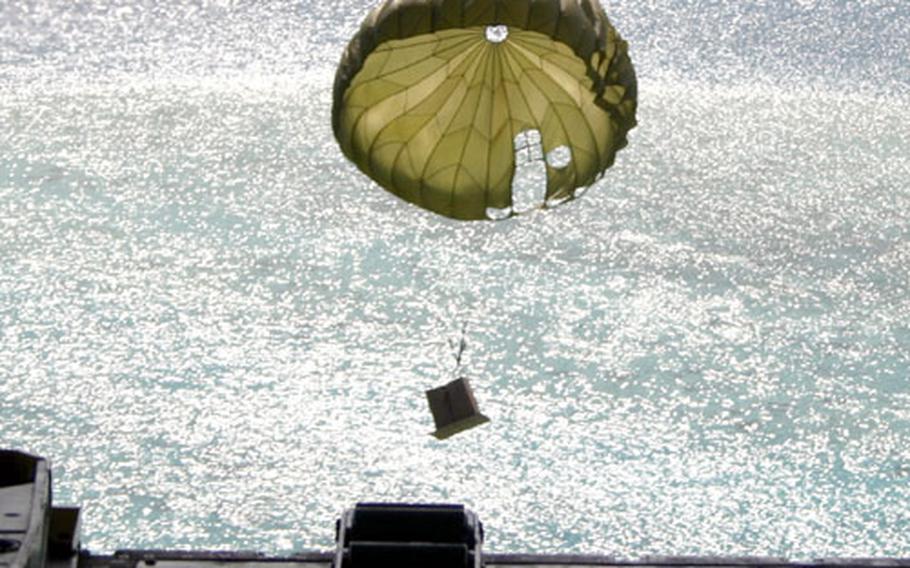 A box full of gifts and supplies makes its way to the water off Elato Island in Yap State in the Federated States of Micronesia. Boats were positioned below to retrieve the box. (Frank Whitman / Special to S&S)

Christmas came early this week for residents of more than 50 of the most isolated islands on the planet.

On Sunday, Monday and Tuesday, three U.S. Air Force C-130 cargo planes dropped boxes containing gifts and supplies to the residents of 55 of the outer islands of Palau and the Federated States of Micronesia. This year&#8217;s Operation Christmas Drop was the 53rd time that military and civilian personnel in Guam collected, boxed and parachuted donations to the people living on islands with populations that are counted using two- or three-digit numbers.

The C-130s were flown to Andersen Air Force Base, Guam, from their home base at Yokota Air Base, Japan, and were crewed and accompanied by 88 members of the 36th Airlift Squadron of Yokota&#8217;s 374th Airlift Wing.

Capt. Michael McVay of 36th Mission Support Squadron and chairman of Operation Christmas Drop spent the past several months at Andersen collecting donations, getting them boxed and otherwise ensuring that the goods would be ready for delivery.

Collection boxes were set up at local businesses, Navy and Air Force base exchanges and at Andersen Middle School. Local Rotary Clubs donated fishing nets and more than $2,500 worth of medical supplies; Navy and Air Force spouses&#8217; groups donated $4,000 and $3,000, respectively; and the student government at Andersen Middle School donated more than $1,000 worth of toys, games and tools.

The overwhelming majority of the islands that received Christmas Drop boxes are hundreds of miles from any commercial airport, and most see only two or three boats a year from their district center. Fishing, coconuts and taro farming provide most of the islanders&#8217; food, making fishing gear and farming tools especially welcome gifts.

Delivering the boxes is a well-orchestrated process, say the servicemembers involved.

On the day of the drops, crewmembers are supplied with a list of target islands and their coordinates.

&#8220;Once we get there, we have to look for a flag marking the drop zone,&#8221; said Capt. Jerry Hickey, navigator of the flight that dropped 10 boxes to residents of the Canoe Islands in the Federated States of Micronesia.

Radio communications link the plane&#8217;s crew with the islanders, somewhat tenuously, through the University of Guam&#8217;s PeaceSat Network Coordination Center, a communication hub for Micronesia.

The drop zones usually are on the beach, in shallow water or some other clear area. In the past, boxes &#8212; which weigh an average of 430 pounds each &#8212; have broken free of their parachutes, said PeaceSat&#8217;s Bruce Best, who has helped coordinate the Christmas Drop for more than 20 years.

The planes make a low pass over the drop zone to give islanders a chance to clear children, pets and vehicles out of the way. Once the box is dropped, the planes fly over a third time to determine the success of the drop.

&#8220;It makes me feel real good to see all the islanders waving and cheering after the drop is made,&#8221; said Master Sgt. Kevin Saquilan, a loadmaster who completed his fourth Christmas Drop this year.

&#8220;This spreads the spirit of Christmas to all the people involved &#8212; the people who donated, the packers who boxed and rigged and all the Air Force personnel who worked,&#8221; said Tech Sgt. Walter Fujioka, a loadmaster working his third Christmas Drop.

&#8220;This is what we train to do every day. But today, we were able to show the people and children that Christmas is coming soon.&#8221;