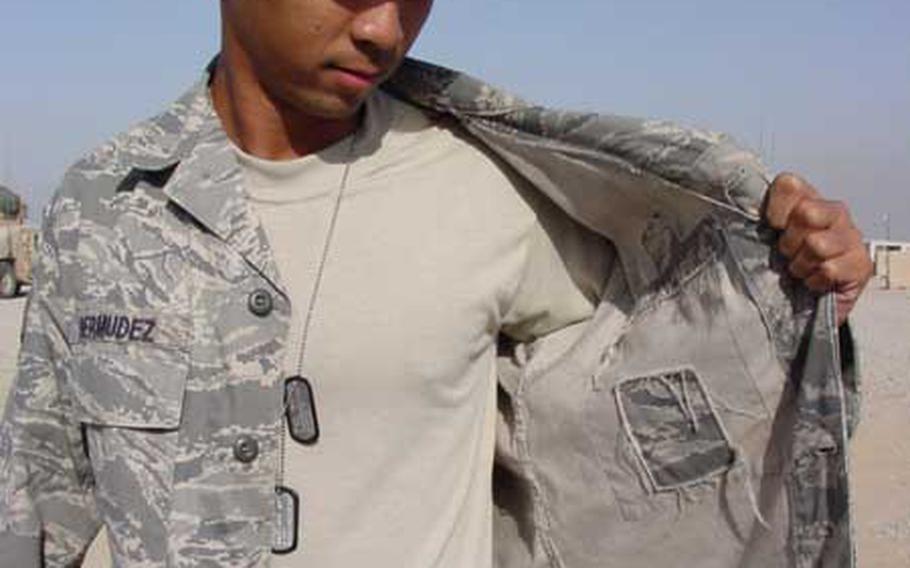 Buy Photo
Air Force officials say that a new lightweight version of the Airman Battle Uniform blouse won’t be available until the fall of 2010. The service decided to offer the new uniforms because airmen said the ABU blouse was too hot in deployed locations. In November 2007, Senior Airman Michael Bermudez, assigned to the 732nd Expeditionary Security Forces Squadron in Iraq, showed the inside of his uniform with the map pocket removed to make the uniform cooler. (Stars and Stripes)

Another summer, another sweat bath for troops deployed to the Middle East.

But Air Force members shouldn&#8217;t hold their breath expecting to beat the heat in a lighter-weight version of the Airman Battle Uniform. At least not this summer.

Air Force officials said last week that a new lightweight version of the ABU blouse won&#8217;t be available until the fall of 2010. That will give manufacturers enough time to produce the new blouse in sufficient quantities, according to Air Force spokesman Maj. Paul Villagran.

Released in 2007, the new ABU was meant to be more rugged than its predecessor and the blouse was supposed to be all-weather.

But after hearing feedback from airmen on the new blouse&#8217;s poor performance in hot weather, Air Force planners went back to the drawing table to produce a lighter-weight blouse.

The new blouses will be phased in to existing inventories, Villagran said. The plan is to have airmen purchase the new lightweight blouse when their old one wears out, he said, with the heavier blouses eventually disappearing from uniform racks.

The new ABU&#8217;s thickness isn&#8217;t the only thing that had airmen a bit hot under the collar after the 2007 release. A map pocket on the inside of the uniform jacket also heated things up for deployed airmen, with some in the ranks opting to cut out the pocket in the name of keeping cool.

In 2008, Staff Sgt. Walter Weber, who was deployed to Iraq, sounded off on the tiger stripe ABU to Stripes.

"[The ABU is] a great uniform to wear in a home station, air-conditioned office," but not outdoors in the Middle East in combat, he said. "It doesn&#8217;t breathe or let air circulate anywhere near as well (as the summer battle dress uniforms). "That&#8217;s not good, considering it&#8217;s starting to heat up here."

High summer temperatures can reach into the 100s in Iraq and in the 90s in Afghanistan.