Andrew Norrington, of Essex, high-fives one of his escorts after making his way through the obstacle course at Joan Mann Special Sports Day at RAF Mildenhall Saturday. (Charlie Reed / S&S)

Andrew Norrington, of Essex, high-fives one of his escorts after making his way through the obstacle course at Joan Mann Special Sports Day at RAF Mildenhall Saturday. (Charlie Reed / S&S) 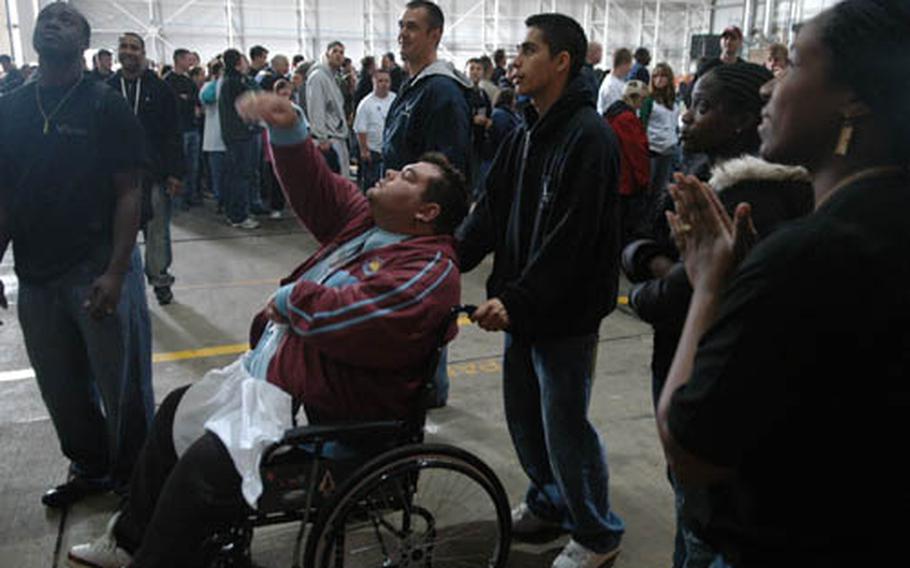 Gary Page, of Capel St. Mary, shoots hoops at the basketball station at Joan Mann Special Sports Day at RAF Mildenhall Saturday. Like each of the 200-plus participants, Page was personally escorted from game to game by volunteers from the tri-base area. (Charlie Reed / S&S)

RAF MILDENHALL - Beaming with enough pride and energy to rival a group of professional athletes, more than 200 men and women of all ages flexed their athletic talents at the 27th annual Joan Mann Special Sports Day on Saturday.

Named in honor of the British Ministry of Defense worker who first organized the event, Joan Mann Day as its known, pairs Britons who have special needs with airmen from RAFs Lakenheath and Mildenhall for an afternoon of Olympic-style games.

Organized by Mildenhall&#8217;s Top 3 senior enlisted club, the event revolved around 15 gaming stations &#8212; from basketball and football tosses to an obstacle course. In all, about 700 troops and civilians turned out to escort the players and help run the games and concessions.

"It couldn&#8217;t happen without the volunteers," said Master Sgt. Jeff Blackwell, with the 100th Logistics Readiness Squadron. "And of course, the players are what we want to focus on. We want to make it all about them."

As chairman of the Joan Mann Day committee, Blackwell spent eight months planning the event, one of the largest the base sponsors for the British community.

The base promotes the event with facilities, schools and local organizations for people with special needs throughout East Anglia, but word of mouth draws the majority of people, he said.

Making their way from game to game, the eager athletes seemed to enjoy time with their guides as much as the games themselves Saturday.

"It&#8217;s a good event," said Senior Airmen Brandon Derrickson, with the 48th Dental Squadron at Lakenheath. "It boosts their morale and makes you feel good for helping out, too."

Martin Drake, a member of the British American Community Relations Committee, spent Saturday morning setting up a coffee and tea service for the volunteers who started arriving at 6 a.m.

"We wanted to help because all the American personnel do such a brilliant job with this event," said Drake, a Mildenhall resident. "You can see it in the brightness that lights up their faces."