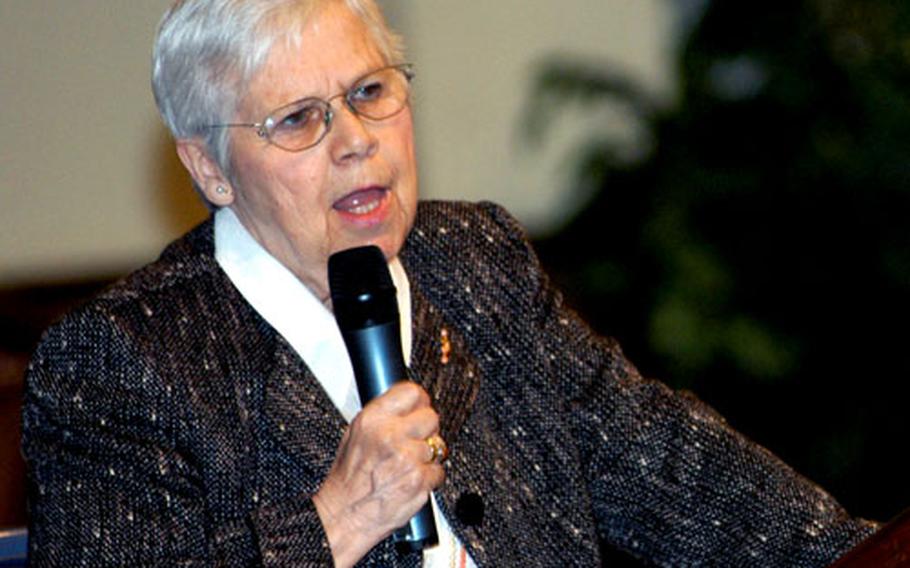 As part of Holocaust remembrance events at RAF Mildenhall, Janina Fischler-Martinho, a survivor of the Nazi liquidation of the Krakow ghetto in World War II, talks to American airmen about how she was separated from her parents as a young girl and had to steal food to keep from starving. (Ben Murray / S&S)

The Poland native recounted how she and her family had been forced into a ghetto in Krakow in December 1941, then split up as her father, mother and little sister were herded into cattle cars.

Fischler-Martinho and her older brother, Joseph, watched them walk away with thousands of others, not knowing where they were headed.

Fischler-Martinho spoke at Mildenhall&#8217;s Galaxy Club as part of two days of Holocaust remembrance events last week sponsored by the 100th Air Refueling Wing and the 48th Fighter Wing. Organizers contacted Fischler-Martinho, who has written a book called &#8220;Have You Seen My Sister?&#8221; through the London Jewish Cultural Centre.

On Tuesday, the bases organized a special service at the Mildenhall chapel where Rabbi Jacob Goldstein delivered a presentation about his wartime experiences as a child.

Fischler-Martinho&#8217;s hourlong account of events in Krakow between 1939 and 1945 was a harrowing tale of escalating confusion, fear and desperation among the Krakow Jews.

&#8220;We knew from the very start that the Jews were the primary target,&#8221; she said. At the age of 10, Fischler-Martinho was marched into the ghetto with her family, where they lived an &#8220;inhuman&#8221; existence in crowded, tiny rooms with no heat or water.

Making friends with the guards at the ghetto gates, she soon set up a small black market business selling scavenged goods to people on the outside.

In 1942, the SS surrounded the ghetto and began to round people up for &#8220;resettlement&#8221; in the east, and her family was split. She remained behind with her older brother, and the two fought desperately to stay alive in the city.

Fischler-Martinho said she became very skilled at stealing people&#8217;s food right out of their hands in order to eat.

When the SS surrounded the ghetto again in 1943, this time shooting indiscriminately into mobs of panicked citizens, she escaped by jumping through a manhole and traveling through the sewer. Now on the outside, she and her brother had to split up, and the young Fischler-Martinho was forced to fend for herself alone for two years in Nazi-occupied Poland.

&#8220;But I did survive,&#8221; she said. Her brother, too, survived a German concentration camp, and another emotional high point came when she recounted his rescue by American troops in 1945.

For recounting her troubling story for an American audience, Fischler-Martinho was presented with a glass plaque that reads, &#8220;A human spirit in the shadow of death.&#8221;