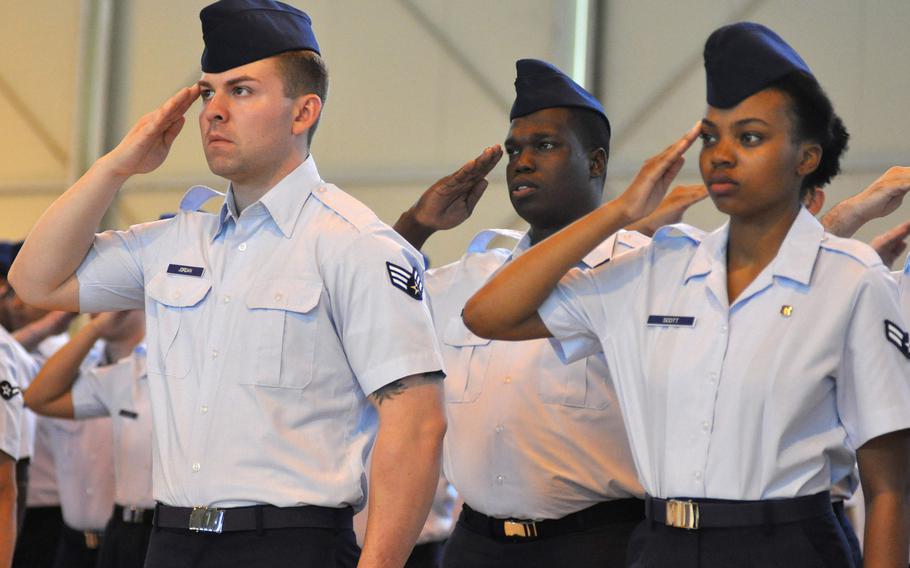 Buy Photo
Airmen offer their salutes to 31st Fighter Wing leadership during a change of command ceremony at Aviano Air Base, Italy, Friday, June 10, 2016. With the Marines removing 'man' from some job titles, will airmen be called something else? (Kent Harris/Stars and Stripes)

RAMSTEIN AIR BASE, Germany — The Navy may be scuttling “yeoman” and the Marines ditching “infantryman” in favor of “infantry Marine.” For the time being, however, airmen will stay airmen, and many Air Force folks in the ranks think that’s just fine.

In January, Navy Secretary Ray Mabus ordered the service to review job titles and consider eliminating references to “man” in job titles. This week the Marine Corps announced it would remove the “M-Word” from 19 speciality titles in favor of gender-neutral names.

The Air Force has signed on to the Pentagon’s decision to remove barriers to women in formerly male-only combat jobs. But it won’t be reviewing gender-specific job titles. Airman will remain airman, regardless of the servicemember’s gender.

A series of random conversations with Air Force servicemembers at Ramstein Air Base and RAF Lakenheath in Britain found little enthusiasm for changing the hallowed title of “airman.”

“It should be left as it is now; it’s part of our tradition,” said Chief Master Sgt. Erika Schofield, 42, based at Ramstein. “Using ‘man’ in our titles isn’t gender-specific in our career fields.”

At Lakenheath, Senior Airman Julia Liggio said she didn’t think being called an “airman” was a “big deal.”

“I’ve been called an airman my entire enlistment, and it’s never bothered me in any way,” she said.

Some Air Force members don’t like tinkering with heritage.

“I think the term ‘airman’ needs to stay how it is. It’s who we are. It’s part of our heritage,” Senior Master Sgt. Andrea Cook said at Lakenheath. “I’ve been an airman for 21 years.”

A female airman at Ramstein had a more straightforward objection to the debate in the other services about the gender term.

“Dumb is the only way I can describe it,” she said on condition she not be named. “Don’t they have anything smarter to do with their time?”

One male officer at the USAF Security Forces at Ramstein noted that the Air Force had already introduced gender neutral terms for some jobs.

“We’ve always been security forces members or defenders,” said the officer, who spoke on condition of anonymity.

Even if the Air Force decided to relegate “airman” to the dustbin, it faces a practical problem that other services do not.

What would replace it? Soldier, Marine and sailor are already gender-neutral terms for members of the Army, Marine Corps and Navy.

“I can’t even think of a change to airman that would sound cool,” Senior Airman Glenn O. Gonzalez Diaz said at Lakenheath.

Stars and Stripes reporter William Howard contributed to this report.