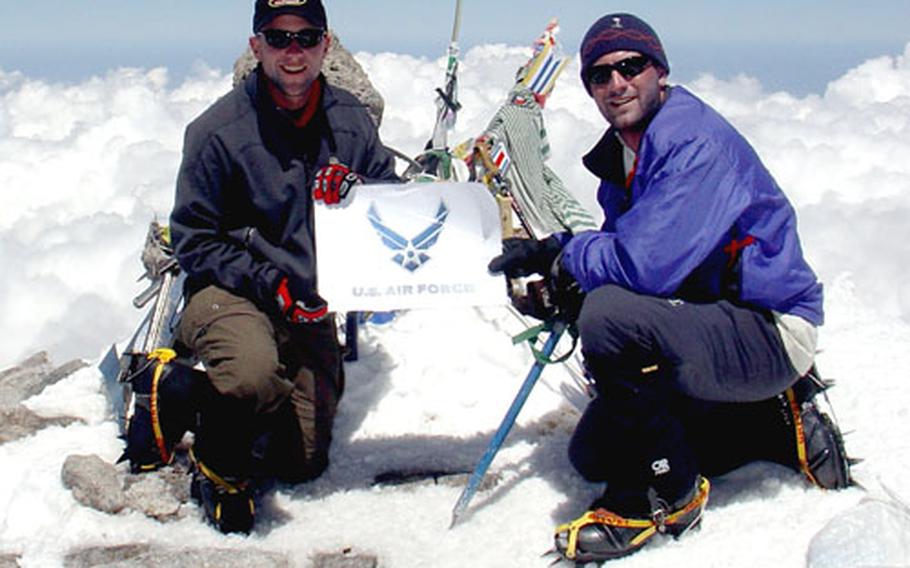 Capt. Rob Marshall, left, and 1st. Lt. Mark Uberuaga hold up the Air Force logo at the summit of 18,512-foot Mt. Elbrus in Russia, the highest point on the European continent. (Courtesy of Rob Marshall)

Capt. Rob Marshall, left, and 1st. Lt. Mark Uberuaga hold up the Air Force logo at the summit of 18,512-foot Mt. Elbrus in Russia, the highest point on the European continent. (Courtesy of Rob Marshall) 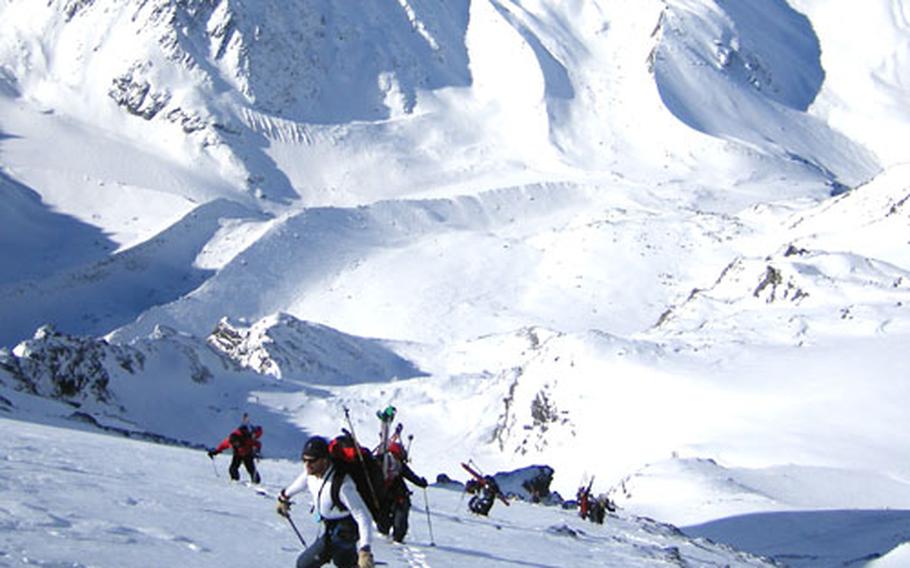 First Lt. Mark Uberuaga, foreground, from the 21st Special Operations Squadron, works his way up a mountainside on a training climb along the Haute Route hiking and skiing trail through the French and Swiss Alps last winter. (Courtesy of Rob Marshall) 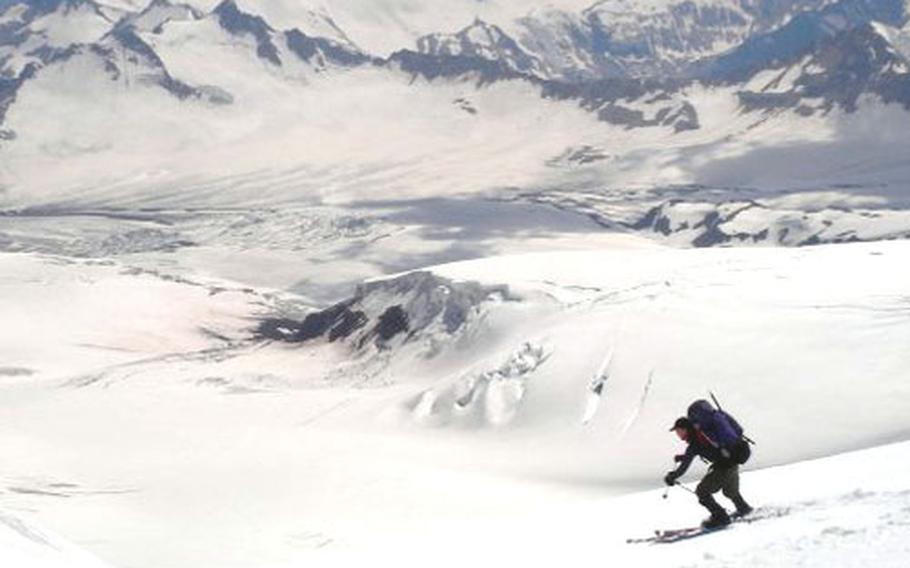 Capt. Rob Marshall skis down from the summit of 18,481-foot Mt. Elbrus in Russia. (Courtesy of Mark Uberuaga)

RAF MILDENHALL &#8212; A group of 10 airmen and civilians hailing from air bases in England and the States didn&#8217;t just aim high this week for the Air Force, they picked a specific point: 19,340 feet, to be exact.

That&#8217;s the altitude at the top of Africa&#8217;s highest peak, Kilimanjaro, where the group hopes to be standing by this Sunday after seven days of hiking.

It&#8217;s a lofty goal that few have ever managed &#8212; no official records are kept but about 200 people have reported the accomplishment online &#8212; but the two airmen said they are confident they can be the first Air Force-led team to accomplish the feat.

They&#8217;re already on their way. Last year, the two completed a climb of 18,481-foot Mount Elbrus in Russia, the highest point in Europe. Assuming a successful ascent of Africa&#8217;s highest mountain, it&#8217;ll be two down, five to go.

For Marshall and Uberuaga, the project has been moving fast since they met a little more than a year ago. The two quickly discovered a mutual fondness for high-altitude climbing.

By then, Marshall already had made one ascent of Kilimanjaro and a solo trip to the Everest base camp in Nepal, and Uberuaga had worked as a climbing guide on some of North America&#8217;s highest peaks &#8212; Mount Rainier in Washington and Denali (Mount McKinley) in Alaska &#8212; in the summers between semesters as a ROTC student.

The two quickly began forming plans for a Seven Summits attempt, Marshall said, but serious motivation to get under way became even stronger after a Mildenhall-based MC-130H airplane crashed in Albania killing nine members of their unit, the 352nd Special Operations Group.

Marshall said the accident hit him hard, and he wanted to do something proactive to remember the men. The roommates, they decided, would climb in memory of the servicemembers and use the effort to raise money for a charity dedicated to providing college tuition money for children of fallen special operations troops, the Special Operations Warrior Foundation.

With that incentive, the two set off for Russia to begin the quest.

Having conquered Mount Elbrus, Marshall and Uberuaga this year wanted to expand the effort for the Kilimanjaro climb for a few reasons.

First, they want to raise awareness of their goal to help accrue more money and attention for the foundation fund and show a positive side of the Air Force &#8212; that its members are often outgoing and adventurous, Marshall said.

It seems to be working. Even as Marshall talked about the trip, a food services employee at Mildenhall&#8217;s Galaxy Club approached and handed Marshall a $100 bill for the fund, which he estimated brought the team to about halfway to its $10,000 fundraising goal.

As a second climb, Kilimanjaro proved fortuitous, because people can ascend the mountain without technical climbing skills, allowing the pair to invite family members and fellow airmen. In all, 10 will make the attempt, including Uberuaga&#8217;s father, David, and Marshall&#8217;s sister, Edie.

Not that Kilimanjaro is an anthill. On his first trip to the mountain, Marshall said, a man in front of him died at the summit of high altitude-related causes.

That kind of potential danger gives recreational climbers Capt. Heather Healy and 1st. Lt. Nichelle Brokering, who will each make their first forays above 15,000 feet on the trip, a healthy respect for the mountain, they said, though both said they weren&#8217;t nervous. The Mildenhall airmen just want to get there and get hiking, they said.

But Marshall and Uberuaga also need the climb to show they&#8217;re serious about bagging all seven mountains, because &#8212; as active-duty pilots &#8212; they will need official Air Force backing to make it a reality. An attempt at Everest takes two months, Uberuaga said, not including training trips, and getting to Antarctica to climb the Vinson Massif (16,067 feet) means weeks of travel and serious logistical support.

In the meantime, the team is still working to raise money for the SOWF fund, Marshall said. Those interested in donating can visit www.usaf7summits.com or www.specialops.org.