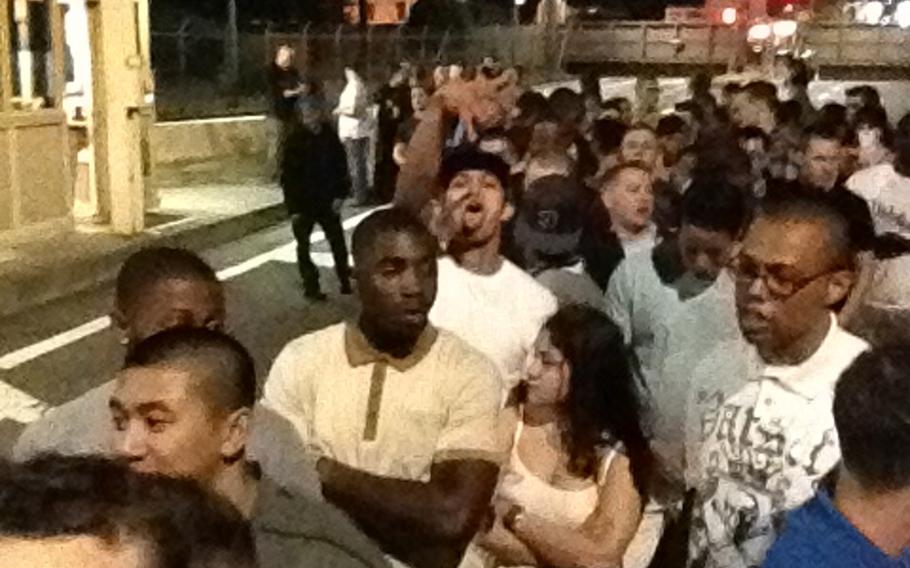 More than 200 active-duty servicemembers wait at the entrance to Yokota Air Base, Japan, early Saturday morning, May 17, 2014, after a night out on the town. Base officials conducted a mass drug-testing of 273 troops. (Courtesy of Samuel Aldrich)

“There were no positive results of illegal drug use from tests administered during last month’s gate sweep,” 374th Airlift Wing spokesman 1st Lt. Jacob Bailey said in an email Tuesday.

The 273 drug tests were conducted on the night of May 16 to 17 as hundreds of servicemembers attempted to return home through Yokota’s main Fussa gate after a Friday night on the town. Some who waited to provide urine samples complained that they didn’t get home for several hours.

Bailey said the samples were tested for a variety of prohibited substances to include marijuana, synthetic marijuana, cocaine, methamphetamines, and banned supplements.

The message that the base is sending through random drug testing and sweeps is clear and consistent, Bailey said.

“We will not tolerate the use of prohibited substances by our service members; and we will prosecute offenders to the fullest extent of the Uniform Code of Military Justice,” he said.