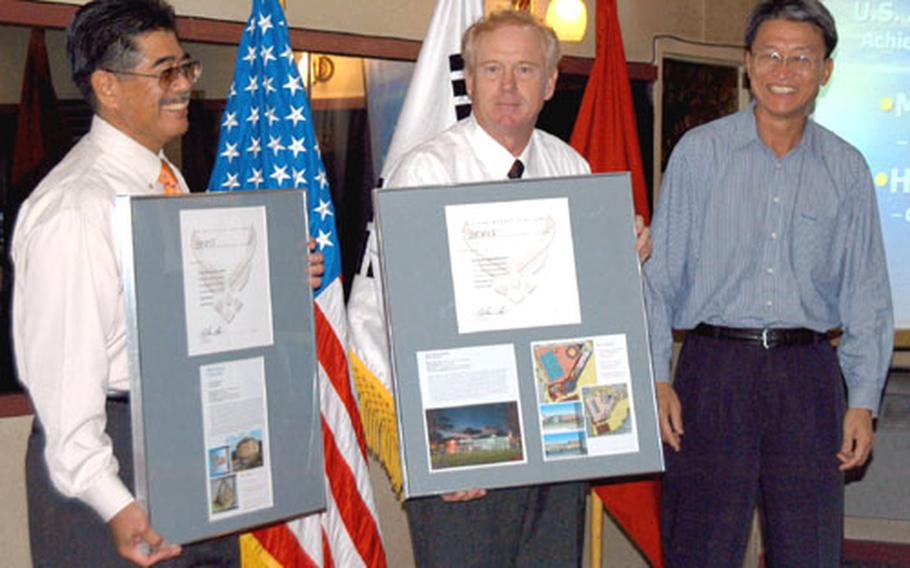 FAR EAST DISTRICT, Seoul &#8212; The U.S. Air Force recently honored servicemembers and workers with the U.S. Army Corps of Engineers here for the work they did planning two projects at Osan Air Base.

On Thursday, the staff of more than 50 celebrated the awards, which honored design work for an indoor swimming pool and a 10-story family housing unit at the air base in the Pyeongtaek area, south of Seoul.

&#8220;We are in a tough business,&#8221; Lt. Col. John Loefstedt, Far East District&#8217;s deputy commander of the engineer corps, told the group Thursday afternoon. Designing and building facilities is a challenge, he said, because the work is around for years and everyone who uses it finds something to criticize or question.

The housing unit, slated to open in 2008, will house 104 families, Loefstedt said. The indoor swimming pool is to be built nearby and should be completed by February 2006.

The judges for the awards praised the engineer corps for designing buildings to meet the military&#8217;s needs while working with limited space for the building&#8217;s footprint and parking.

The awards were presented to two civilian workers for the engineer corps &#8212; Henry Miyamoto and Paul Yoo &#8212; and to David Dougherty of Thomas J. Davis Inc./Jung Il Associates.