Airmen at Osan switching from M16A2 to lighter M4 carbine 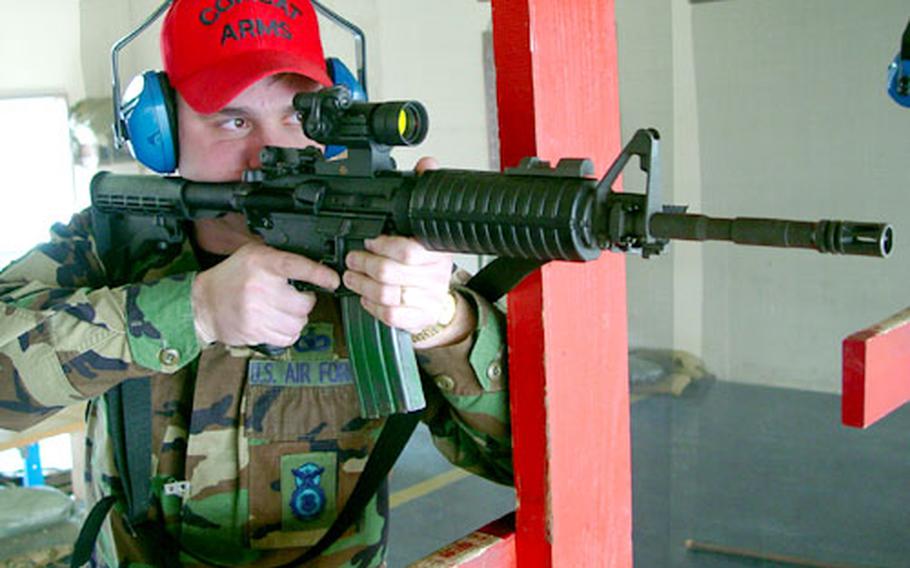 Air Force Staff Sgt. Jeremy Potts takes aim with the M4 carbine earlier this month at Osan Air Base in South Korea, where security forces and other airmen are making the switch to the M4 from the M16A2 rifle. Potts is a combat arms instructor with Osan’s 51st Security Forces Squadron. (Courtesy of U.S. Air Force)

OSAN AIR BASE, South Korea &#8212; Airmen here are switching from the M16A2 rifle to the shorter, lighter M4 carbine, a weapon instructors say is well-suited to urban warfare conditions.

Some 600 airmen of the 51st Fighter Wing here have made the switch after being trained in care and use of the M4.

The change, under way since August, involves mainly members of the wing&#8217;s 51st Security Forces Squadron, which polices the base but also is to defend it against ground attack.

Also part of the switch-over are airmen in two other fields, the Red Horse construction units that build airfields and airmen assigned to Tactical Air Control Parties, or TACPs, who travel with ground forces and help them guide in airstrikes on enemy ground targets.

The wing expects to train another 100 or so airmen in the M4 this year, said 1st Lt. Franck Canetto, officer in charge of the 51st Security Forces Squadron&#8217;s Resources and Training section.

The remainder of the wing&#8217;s airmen will continue using the M16A2, Canetto said.

But the shorter barrel also has made it tougher for some shooters to get as high a marksmanship score as with the M16A2, Potts said. &#8220;Any little quirk you might have in your shooting, the M4 magnifies that. ... If you&#8217;re doing things like jerking the trigger, not controlling breathing, you&#8217;re gonna pay for with an M4.&#8221;