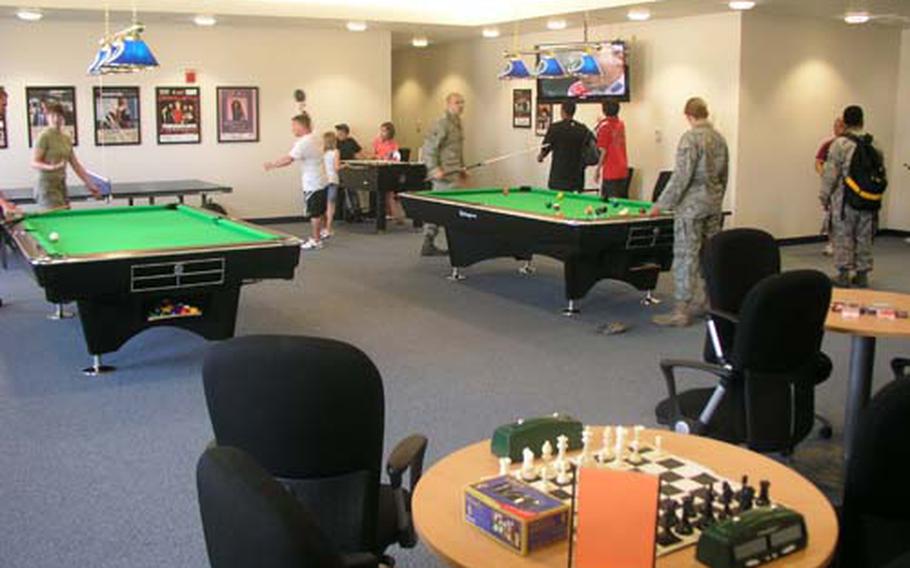 Airmen and other base residents make immediate use of a game room at the community center that opened Wednesday afternoon at Osan Air Base, South Korea. (Franklin Fisher / S&S)

Airmen and other base residents make immediate use of a game room at the community center that opened Wednesday afternoon at Osan Air Base, South Korea. (Franklin Fisher / S&S) 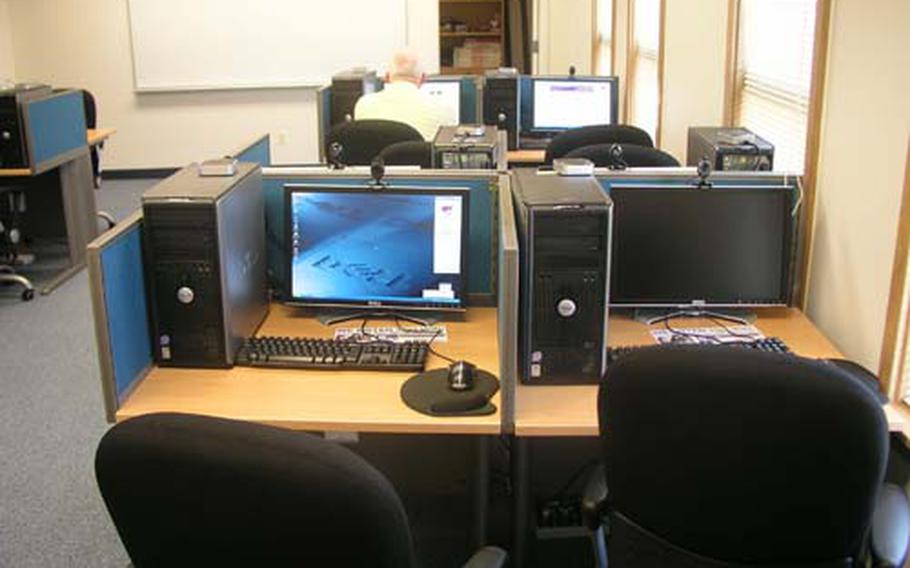 A room of 12 computer stations with webcams and free Internet access is one of many amenities inside the new $4.6 million McPherson Community Center, which opened Wednesday at Osan Air Base, South Korea. (Franklin Fisher / S&S)

OSAN AIR BASE, South Korea &#8212; Airmen and kids who live at Osan Air Base got a first look Wednesday at their new community center and said they liked what they saw.

Officials opened the McPherson Community Center with an afternoon ribbon-cutting ceremony at Building 916, next to the base library.

Some airmen made straight for the game room&#8217;s green-topped pool tables, where the sharp click of pool balls was soon heard. A group of teenage boys, full of laughs, got up an exuberant game of darts on the electronic dart boards.

"Safely, safely," a nearby adult reminded them.

Across the room, a set of youngsters chatted at the Foosball table.

"It&#8217;s beautiful," said Staff Sgt. Rachael Herrmann, 27, sergeant in charge of operations at the Air Force News Agency&#8217;s Detachment 15. And it seems to have exactly what the base needs.

Those amenities include a room with 12 computer stations, each with webcams and free Internet access.

Three people were already making use of them within minutes of the opening.

Herrmann soon will leave Osan for her next duty station.

"But I&#8217;m excited to see the airmen who are going to be here have a place like this," she said.

"This&#8217;ll be very enjoyable," he said. He&#8217;s especially looking forward to playing pingpong, but he also took note of the computers and the center&#8217;s Xbox gaming stations. Each has 32-inch screens and reclining seats.

"It&#8217;s going to provide necessary enjoyment, very needed enjoyment" for the base community, Col. Jon A. Norman, commander of Osan&#8217;s 51st Fighter Wing, said during remarks at the ribbon-cutting ceremony.

And Norman announced the center will be closed to children after 6 p.m.

Funds for the $4.6 million project came from South Korea&#8217;s defense ministry under its burden-sharing arrangements with the U.S. military. The Shin Woo Construction Co. built the center under contract with the U.S. Army Corps of Engineers&#8217; Far East District.