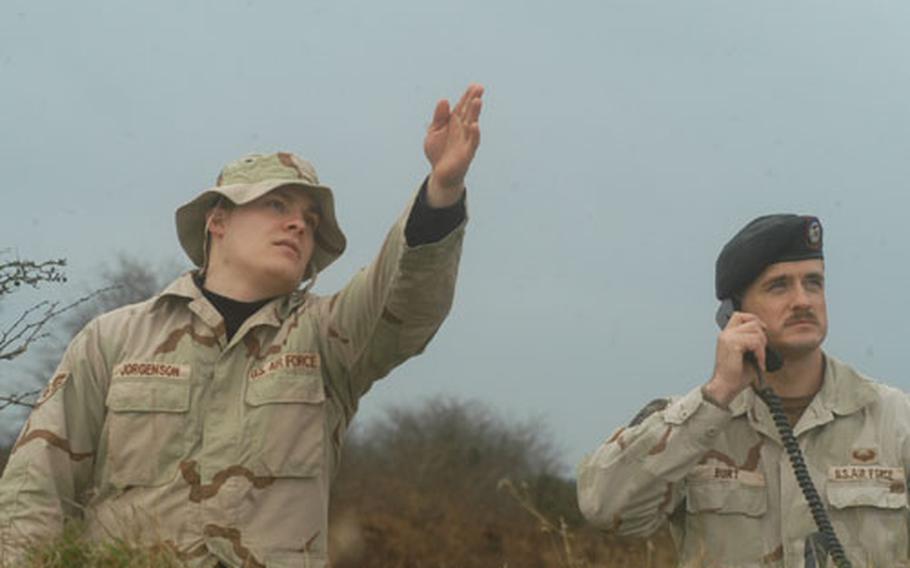 It falls to them to contact and guide aircraft when the soldiers on the ground need a helping hand from above.

&#8220;Our job is to provide close air support and advise [the soldiers] on how they can use air power safely and effectively,&#8221; said Burt, a 19-year veteran of the Air Force, all of it as a tactical air command and control specialist.

For the past couple of weeks, Burt and several colleagues have been at RAF Lakenheath, practicing close air support with the 492nd Fighter Squadron.

While F-15E Strike Eagles soar above in the English sky, the controllers remain on terra firma, linked to the aircraft by radio, directing the pilots to particular targets in simulated attacks at a British military training area not far from the base.

It is appropriate training. Both the 1st Infantry Division and the 492nd Fighter Squadron are soon headed to the Middle East. The soldiers are going to Iraq, and the fliers will make their home at an air base in the theater of operations.

&#8220;This training is properly suited for [Aerospace Expeditionary Force] 7 because these controllers will be down there when we are,&#8221; said Lt. Col. Dan DeBree, the squadron&#8217;s director of operations.

AEF 7 is the designation given to the squadron&#8217;s rotation into the region, which begins next month.

Plus, DeBree said, the ability to have controllers on the ground in England for training is unusual.

Burt and his colleagues live with the Army in Germany and some will deploy with the division to Iraq this month, rotating in and out with other detachment members. If the soldiers go on a raid or a convoy gets ambushed or any of a number of other actions take place that may require air support, that help is a radio call away.

The final decision on whether bombs will be dropped rests with the ground commander, Burt said. It is the controller&#8217;s responsibility to tell the commander what aircraft are available, what munitions are on them and what the expected damage will be.

Burt said the preferred distance to have between the friendly troops and the target is 1,100 yards. In Afghanistan, however, he said, some munitions were dropped on targets barely 200 yards from the American soldiers.

Several times a day in England, the controllers and the fliers join forces to identify and &#8220;attack&#8221; terrorist camps, enemy armor or troop locations.

The F-15s may be specks high in the sky, but their effect can be felt on the ground.

DeBree said the value of training for close air support can&#8217;t be overstated.

&#8220;We have to be ready, especially with close air support,&#8221; he said. &#8220;With the close proximity of friendly troops ... the precision and accuracy has to be spot on. The consequences of a mistake can be extremely great.