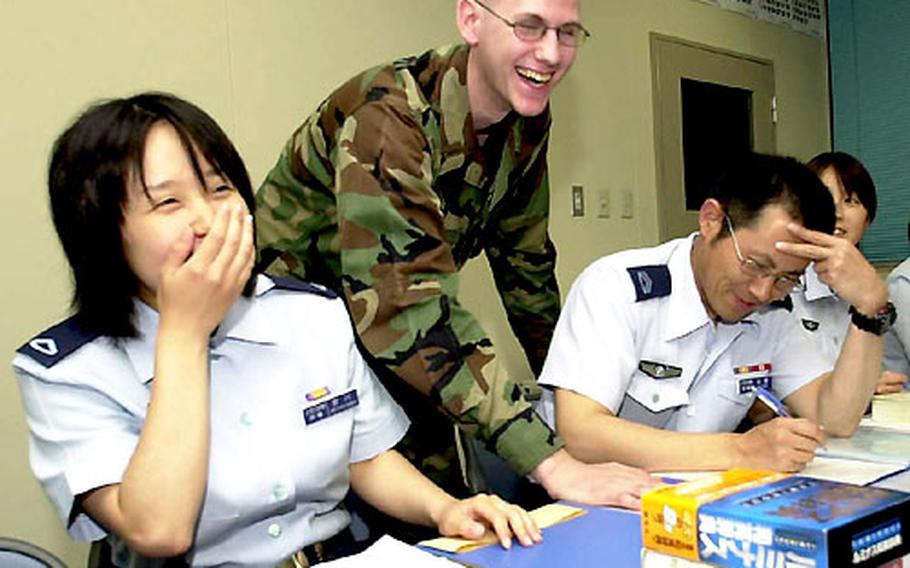 &#8220;It&#8217;s one of the best ways to learn the Japanese culture,&#8221; says Kuchma, who volunteered to teach conversational English to Japanese Air Self-Defense Force troops.

Kuchma says that some of his students are &#8220;shy, while others are very good with their English ability.&#8221;

Japanese airmen here have few opportunities to practice speaking English in a relaxed atmosphere, despite being on an installation with more than 10,000 American troops and their families, Kuchma said.

Most Japanese students receive English language instruction during elementary and high school, and many continue taking lessons after entering colleges or universities according to Kuchma.

&#8220;I don&#8217;t use textbooks, just pages containing examples of English vocabulary and grammar usage,&#8221; said Kuchma, the executive officer of the 35th Maintenance Group. &#8220;They ask me why we use the same words in different ways, and sometimes I may not be able explain some of the stranger uses of our language,&#8221; he said.

Self-Defense Force Staff Sgt. Izumi Miyakawa says she practices her English while working out at the base&#8217;s Potter Fitness Center.

&#8220;I speak to the aerobics instructor who is American, so these classes are very helpful for me,&#8221; said Miyakawa, who recently took second place in her squadron&#8217;s English-speaking contest.

Although his wife, Akane, was born in Japan, Kuchma admits to not knowing a lot of Japanese, although he studied the language in college.