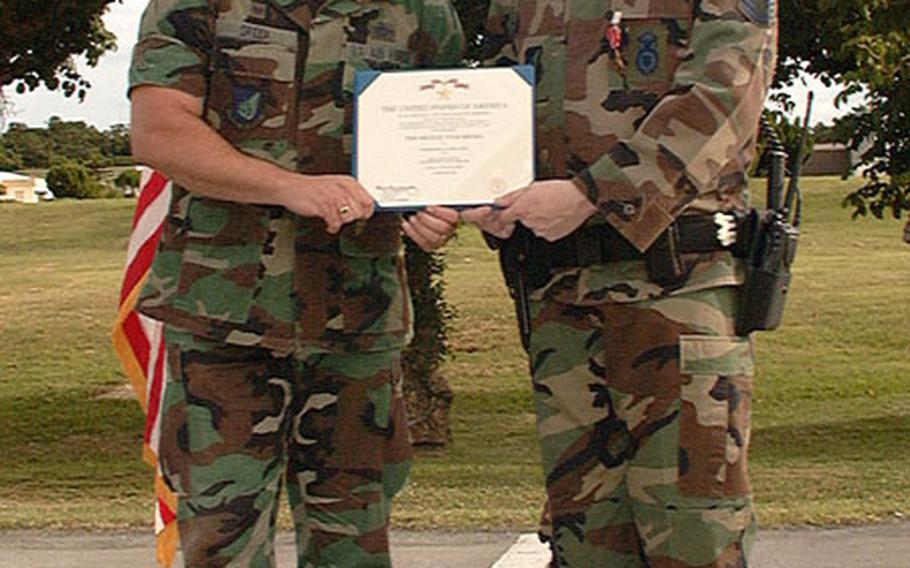 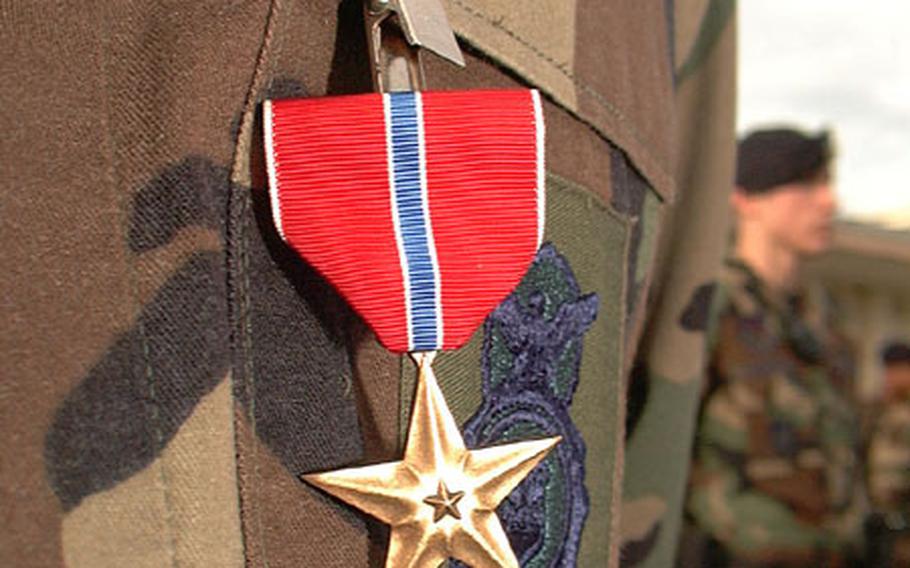 He could tell you all about the decoration. It hangs from a red ribbon with white stripes. The small bronze stars sit atop another, larger, star. Its precise angles stand in sharp contrast to the meandering camouflage pattern of his uniform.

Arvin, a flight leader for Kadena&#8217;s 18th Wing Security Forces Squadron, received the Bronze Star in a brief but formal ceremony Tuesday in front of more than four dozen airmen. It&#8217;s a decoration that followed him to Kadena from his last tour in Saudi Arabia, where he was superintendent of Security Forces Operations with Central Command.

But most of the action for the 17-year Air Force veteran wasn&#8217;t in Saudi Arabia. It was in surrounding countries, including Pakistan, Afghanistan, Turkmenistan and Oman.

&#8220;We had a certain number of sites we were responsible for, assessing threats and making upgrades to security measures, including the U.S. Embassy in Afghanistan,&#8221; Arvin said. &#8220;We looked at all the military sites, all the airfields, Special Forces firebases &#8212; and even at the international security assistance force.&#8221;

That&#8217;s about where Arvin&#8217;s Bronze Star citation starts to lack details. What it doesn&#8217;t say is that many times, he had to catch a helicopter in the middle of the night to a specific location. He&#8217;d spend the day there, take notes and make recommendations, then catch a helicopter out the next night.

The citation doesn&#8217;t say anything of the soldiers, sailors, airmen or Marines with whom Arvin worked, and he&#8217;s not talking either. There&#8217;s no mention of the peril he faced or what types of threats he was working to deter.

But was it ever dangerous?

Like the decoration citation, however, that&#8217;s where the details end. That also seems to be how Arvin would like to keep it. He said when there was talk of putting him up for the award he dismissed it, saying that coming home to his family was reward enough.

Still, Bishop said, there&#8217;s a bit of awe at seeing the Bronze Star go to one of his own.