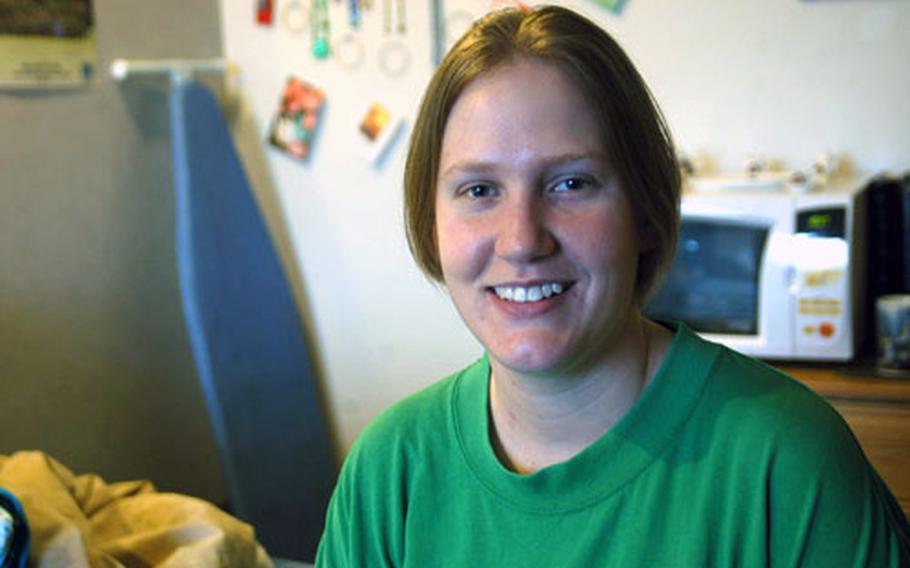 Several weeks after becoming afflicted with a mysterious illness, Airman 1st Class Bethany Swartwood was still building her strength and stamina back up, but was working again at the 100th Logistics Readiness Squadron. (Ben Murray / S&S)

RAF MILDENHALL &#8212; Airman 1st Class Bethany Swartwood remembers that she didn&#8217;t feel very well one Saturday in November, but didn&#8217;t think much of it.

But what the 22-year-old didn&#8217;t know was she was feeling the first pangs of a ferocious and mysterious infection that she said would have doctors within four days predicting she wouldn&#8217;t live through the week.

Swartwood&#8217;s condition declined so quickly that she said Air Force officials called her parents the following Tuesday to warn them that she might not ever be resuscitated &#8212; and doctors did not know what was killing her.

In a flurry of activity, Swartwood was taken to three hospitals in a week in the effort to save her, but doctors were not ever able to specifically determine what had attacked her lungs, shutting them down and threatening her life, she said.

Just as inexplicable, she said, is how she managed to recover in almost the same amount of time.

Swartwood&#8217;s brief medical odyssey began Nov. 12, she said, the day after she remembers first feeling sick. She woke up vomiting, prompting her suite mate to urge her to go to the hospital, she said.

The airman checked herself into the Lakenheath Medical Center later that day, where her stomach pains got worse and she began to have trouble breathing, she said.

Two days passed at Lakenheath, and Swartwood&#8217;s condition deteriorated to the point that doctors decided to move her to a facility in Bury St. Edmunds, she said, where she was sedated and put on a respirator to help supplement her failing lungs.

And still doctors did not have a definite cause for what was attacking her, she said.

When Swartwood was at the Bury St. Edmunds facility, officials called her parents and told them to fly to England immediately &#8212; a problem because neither had a passport.

In a rush of flights and paperwork, however, Jack Swartwood was able to get an expedited passport within a couple of days, during which Bethany&#8217;s lung condition continued to worsen.

Doctors wanted to move her to a hospital in Leicester to put her on a machine that would infuse oxygen into her blood, doing the job her lungs could not.

Jack Swartwood said he was later told by an Air Force sergeant that even his blitz to England wasn&#8217;t expected to be enough.

By the time he got to the Leicester hospital, however, doctors had determined they didn&#8217;t need to hook her up to the oxygen machine &#8212; her lungs had stabilized, and soon her prognosis began rapidly improving, he said.

After a weeklong fight against an unknown infection that almost killed her, Swartwood had somehow recovered, she said.

Theories on what caused Swartwood&#8217;s illness have varied. She said doctors have told her that she might have picked up a bacteria that lay dormant in her body for years and that she inhaled some of her vomit, causing an infection that led to pneumonia-like symptoms.

A spokeswoman at the Leicester hospital said the doctor who treated Swartwood &#8212; whom she declined to identify &#8212; did not want to speak about the case.

Regardless of the cause, just several weeks after she began vomiting on a Sunday morning, Swartwood was back on duty at the 100th Logistics Readiness Squadron, and has &#8220;been fine ever since,&#8221; she said.

Swartwood said doctors never told her what her diagnosis was.

And though she was unconscious for most of the time, Swartwood said her brush with death has given her reason to reflect on life a little. Following the illness, she decided to patch things up with her biological mother, with whom she had a bitter relationship prior to November.