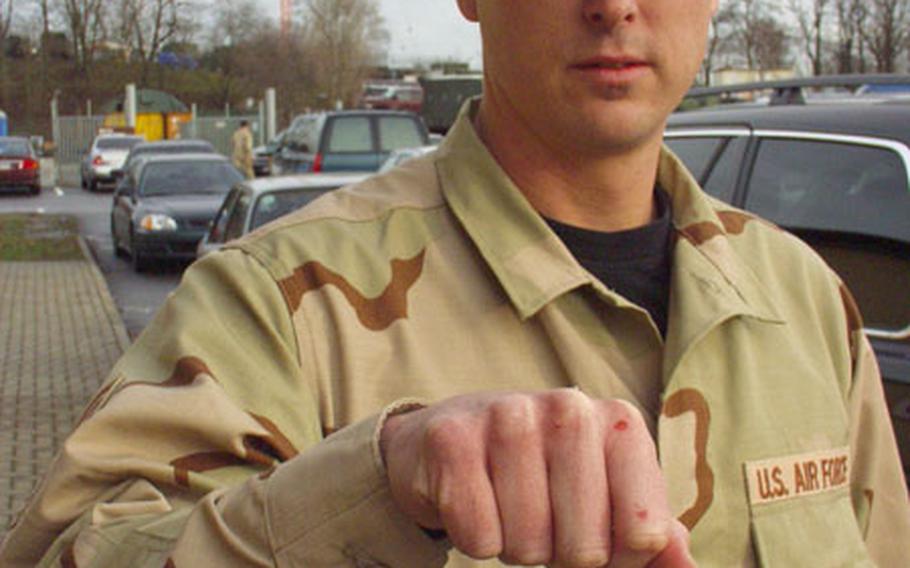 Thinking of his own son, he jumped into action.

Friends and neighbors are crediting Hansen, 33, who serves in W&#252;rzburg with Detachment 1 of the Air Force&#8217;s 7th Weather Squadron, with saving the life of his 7-year-old German neighbor. According to German police, the boy remains hospitalized in W&#252;rzburg with serious injuries.

German police shot and killed the two unattended dogs that belonged to a U.S. soldier who lived nearby.

The attack, and Hansen&#8217;s bravery, drew widespread attention in the German media and was featured on the front page of two local newspapers.

&#8220;If the young man who watched the incident hadn&#8217;t thrown himself on top of the boy, the outcome would have been much worse,&#8221; H&#246;chberg Mayor Peter Stichler told the Main Post newspaper.

A friend of Hansen&#8217;s who came to see him after hearing of the incident said he hopes the Air Force recognizes Hansen for his actions.

Hansen, whose son is also 7, said he was inside his house about 11 a.m. Sunday when he heard his wife screaming from the balcony. He rushed to her side.

One dog had locked onto the boy&#8217;s lower leg. The other had sunk its teeth into his hip.

Hansen saw an older man beating the dogs with a stick. The boy&#8217;s mother tried to free her son by pulling him out of his clothes while also protecting another son, age 4. They had been walking home from a nearby playground when the two loose dogs attacked.

Hansen said he immediately raced into the street and jumped on the boy, pummeling the dogs with his fists. He managed to beat one of the dogs away and cover the boy with his body.

After long minutes of fighting, he managed to free the boy and carry him inside his house. Then Hansen went back to make sure the dogs didn&#8217;t attack again before authorities arrived.

He saw one of the dogs sitting nearby, chewing the boy&#8217;s bloody shirt. When police arrived, they shot the dog after it got up and appeared to threaten a woman on the street.

A short time later, police said, the second dog was killed when it tried to attack a police dog handler who had cornered it on a dead-end street.

Because of privacy restrictions, neither U.S. nor German authorities would release the name of the 32-year-old dog owner.

According to the German police report, the man had placed the dogs in an outdoor kennel when he left the house about 10:30 a.m. Sunday but had forgotten to lock it. Somehow the dogs managed to open the door and escape.

Green, who spoke with the owner by cell phone after the attack, said the man was refereeing a basketball game at a U.S. Army base in Kitzingen at the time. He said the soldier had brought the dogs, named Alpha and Omega, with him when he moved into the house last October after a transfer from Heidelberg.

The Main Post quoted Stichler as saying the two dogs apparently had not been registered with local authorities as required by law in the German state of Bavaria.

A day after the attack, Hansen remained shaken. But he said he didn&#8217;t hesitate to jump in and fight the dogs then, and he wouldn&#8217;t now.

Maj. Bill Smoot, chief of military and civil law in the staff judge advocate&#8217;s office of the 1st Infantry Division in W&#252;rzburg, Germany, said a law of the German state of Bavaria bars anyone from owning any of five breeds of dog, including pit bulls and Staffordshire terriers.

Fourteen other breeds &#8212; including Rottweilers, American bulldogs, bull terriers and mastiffs &#8212; must pass temperament tests and be certified as safe by a German veterinarian before they may be registered in Bavaria.

Smoot said other German states have similar laws. He advised any servicemember or civilian with a dog that might be classified as dangerous to check with their base legal center.