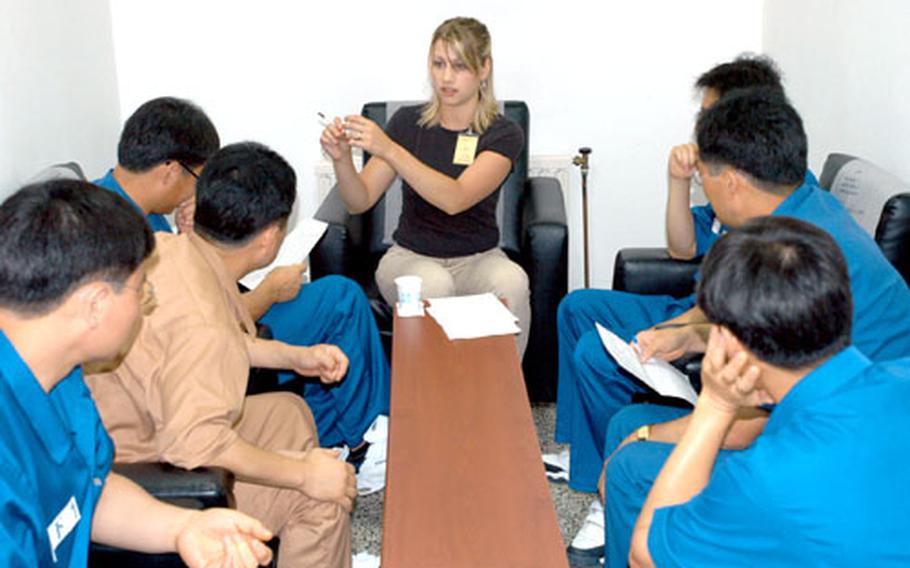 The prison, near Camp Stanley, houses 1,600 South Korean prisoners serving sentences of fewer than five years for less serious offenses. However, most of Smith&#8217;s 30 students are serving longer sentences for more serious crimes. They are brought to the prison to attend her classes and kept separate from the other inmates, according to prison officer Kim Gwang Jo.

The prison&#8217;s English language program started six years ago, growing from links between the prison and Camp Stanley. Since then, several 2nd Infantry Division spouses have taught conversational English to prisoners.

Prisoners from all over South Korea are eligible for the course if they can pass a difficult test, Kim said.

Smith, who makes about $30 an hour tutoring the inmates and said she never went near a prison before coming to South Korea about a year ago, doesn&#8217;t think there is danger in spending time with the violent offenders.

&#8220;I&#8217;d be more hesitant to do it in the States. In an American prison the inmates hoot and holler and scream. The South Korean inmates don&#8217;t act like criminals. They act like gentlemen. They never say anything that would be rude to me in English. I don&#8217;t see them as criminals and I never ask them what their crimes are,&#8221; she said.

Before she started work at the prison, Smith tutored South Korean English students, she said.

The prisoners look forward to the classes a lot more than normal students do, she said.

The prisoners spend seven hours a day studying English in their cells in addition to the classes Smith gives twice a week.

During the sessions, in a small room also used for Buddhist counseling, she helps the inmates improve their skills, teaching them conversational English instead of the dated phrases they learn from textbooks, she said.

One of her first challenges was getting the prisoners to understand her northern accent, which sounds very different from her predecessor&#8217;s Southern accent, said Smith, a native of Fairfield, Pa.

Kim, who grew up in Los Angeles, already speaks better English than Korean, but is taking the course to learn English teaching skills, he said.

&#8220;I will be incarcerated for many more years and want to teach English to the other prisoners,&#8221; he said.

Most of Smith&#8217;s students have at least a bachelor&#8217;s degree from a South Korean university, he said.

&#8220;The majority of people here think you have to learn English. Even in South Korean society you have to know the language,&#8221; Kim said.

The former stockbroker, who has a law degree from Oregon&#8217;s Lewis & Clark College, also is fluent in English but is taking the class to improve his conversation skills, he said.

Smith makes the class fun and brings games to help her students learn, he said.

Kim said working with Smith helps the inmates overcome their fear of speaking English in front of foreigners.