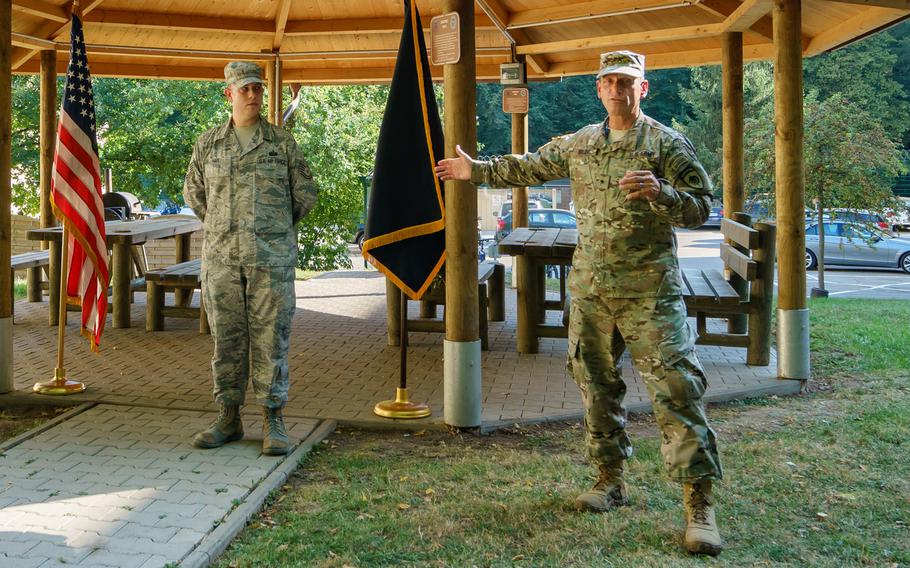 Brig. Gen. Donald Bolduc, head of Special Operations Command Africa, talks to troops during a Purple Heart ceremony at his headquarters in Stuttgart, Germany, on Monday, Sept. 12, 2016. Bolduc, who suffers from a traumatic brain injury sustained in combat, led a push to get Tech. Sgt. David Nafe recognized with the Purple Heart. Nafe received the medal 11 years after a head injury from a blast in Iraq. (Neeko Aquino/SOCAF)

Brig. Gen. Donald Bolduc, head of Special Operations Command Africa, talks to troops during a Purple Heart ceremony at his headquarters in Stuttgart, Germany, on Monday, Sept. 12, 2016. Bolduc, who suffers from a traumatic brain injury sustained in combat, led a push to get Tech. Sgt. David Nafe recognized with the Purple Heart. Nafe received the medal 11 years after a head injury from a blast in Iraq. (Neeko Aquino/SOCAF) 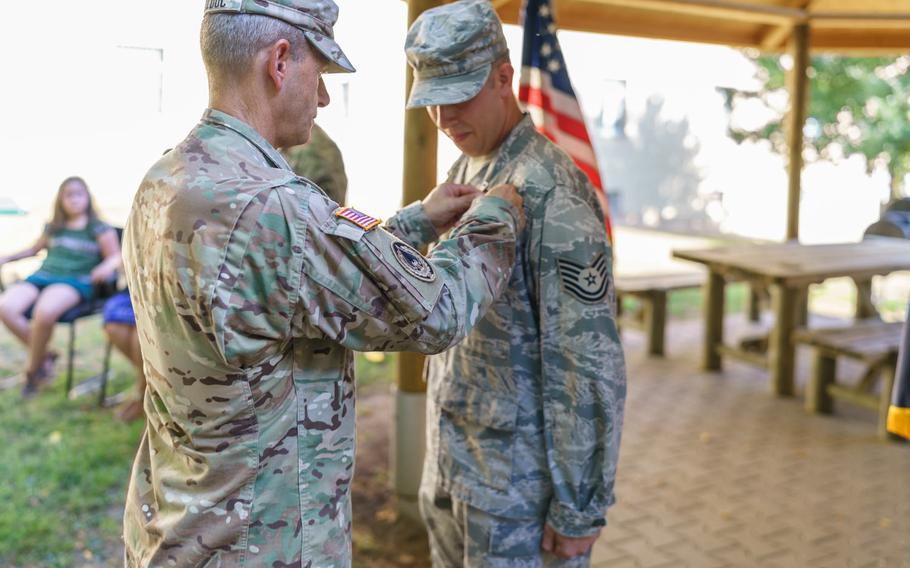 Nothing was the same after a 2005 blast of incoming mortars at a base in Balad, Iraq, that left no outward injuries. For eight years until his head injury was diagnosed, birthdays were inexplicably forgotten, anniversaries missed and Nafe’s job performance suffered.

Now, 11 years later, Nafe’s war wound has finally been acknowledged with the Purple Heart, the result of a push from a Stuttgart special operations headquarters that has made the recognition and treatment of traumatic brain injuries among those in its ranks a centerpiece of the command’s culture.

“TBI shows how someone can look completely normal on the outside but have injuries that aren’t visible,” said Nafe, who serves as a communications specialist assigned to Special Operations Command Africa headquarters in Stuttgart. “It’s not feeling like yourself all the time anymore, but you can’t really point to what it is.”

Nafe, 32, was pinned with the Purple Heart during a ceremony Monday by Brig. Gen. Donald Bolduc, head of Africa Command’s special operations forces, who summoned his Stuttgart staff to mark the occasion.

Nafe’s difficulties, Bolduc said, match his own battle with a TBI.

“I know the struggle you have been through personally,” said Bolduc, turning to face Nafe. “The insidious part of this injury is that you look perfectly normal to everybody else, and they wonder what the heck is wrong with that guy?”

In 2001, Bolduc was a young Green Beret major, part of the first wave of forces into Afghanistan, where he would serve several combat tours. During one of those tours, Bolduc suffered a brain injury in a 2005 helicopter crash.

He also suffers from post-traumatic stress disorder and has chronic pain from a blast injury that required hip replacement, receiving treatment for both, Bolduc said.

Bolduc’s TBI — a 9-millimeter injury to his brain — was diagnosed years later in 2013.

“When he (Nafe) talks about memory loss, trouble communicating, mood swings, nausea — I had it all,” Bolduc said in an interview. “Until you seek treatment for those types of issues, you aren’t going to be able to deal with them effectively.”

As he addressed his troops assembled to recognize Nafe, Bolduc did what he is often known to do when he travels to the Continent to meet forward-deployed troops in Africa, many of whom have served multiple combat tours over the years. The injuries unseen, Bolduc told the gathered troops, can be “just as crippling” as any other combat injury and need to be treated.

“I know that personally, because I am not only your commander; I am also a client of the traumatic brain injury clinic” at Landstuhl Regional Medical Center, he said.

Inside the military, such candor from a senior commander was almost unthinkable at the outset of the wars in Afghanistan and Iraq, where more than 8,000 troops have died and thousands more been injured. Roadside bombs, a signature weapon of the enemy, have made catastrophic wounds such as amputations defining battlefield injuries of the era. What also became clear was that the military was struggling to cope with wounds invisible to the naked eye, like TBI and PTSD.

Cases of soldiers’ lives spiraling out of control as they wrestled alone with brain injuries grabbed headlines and put a spotlight on the military’s medical shortcomings. As suicides in the ranks soared, the Pentagon was forced to confront how it dealt with PTSD and TBI. Gradually, the military’s ability to diagnose TBI improved, and in 2011, the military expanded the criteria for the Purple Heart to better ensure the sacrifices of troops with TBI were acknowledged.

“At first, they (military doctors) couldn’t pinpoint why this was happening. Then as military medicine progressed, 2013 came around, and I was finally diagnosed with traumatic brain injury,” Nafe said. “I think the military has come a long way since 2005.”

When Nafe arrived at SOCAF in 2014, he was quickly connected with the unit’s medical team and said he noticed a command culture in which TBI was an issue discussed out in the open.

“Having him (Bolduc) talk about this, it opens the door for more members and people in the community to step up. And if they have the same thing, they can say, ‘hey I need this assistance as well,’” Nafe said.

Posters about TBI and PTSD awareness and programs are taped to the walls inside SOCAF headquarters, in the small command compound on Kelley Barracks. The latest push is to boost awareness for a new trial underway at LRMC studying the treatment of PTSD by injecting a local anesthetic into a group of nerve cells in the neck, a procedure SOCAF’s top doctor has been advocating for two years.

“This is changing people’s lives. This is changing families’ lives,” said SOCAF command surgeon Col. James Lynch, who co-authored a 2014 study on the medical technique being tested at LRMC.

As Bolduc has climbed in rank over the years, he said, he feels compelled to speak out on issues like TBI and PTSD.

“As a senior leader, it is hugely important for me to share that information to minimize the stigma people feel associated with those injuries,” he said. “They think people are going to think less of them, or prevent them from going someplace and doing something in the military.”

Reservations about opening up also could be more acute in the military’s special operational forces, where machismo runs high and talk of unseen injuries may be interpreted as weakness.

On a recent visit with troops in the field, Bolduc quizzed a group of 50 Green Berets as he tried to break through.

How many troops had been exposed to a blast?

“Most hands went up,” Bolduc said.

How many had sought a diagnosis or treatment for TBI?

Those troops, who were operating at an undisclosed location in Africa, were soon dispatched to LRMC, where several members were diagnosed with TBI and put on a program.

“I think the stigma is pretty close to being eliminated,” Bolduc said. “There is always someone who is not going to get the word. Not going to be convinced. So it is our job to convince people.”