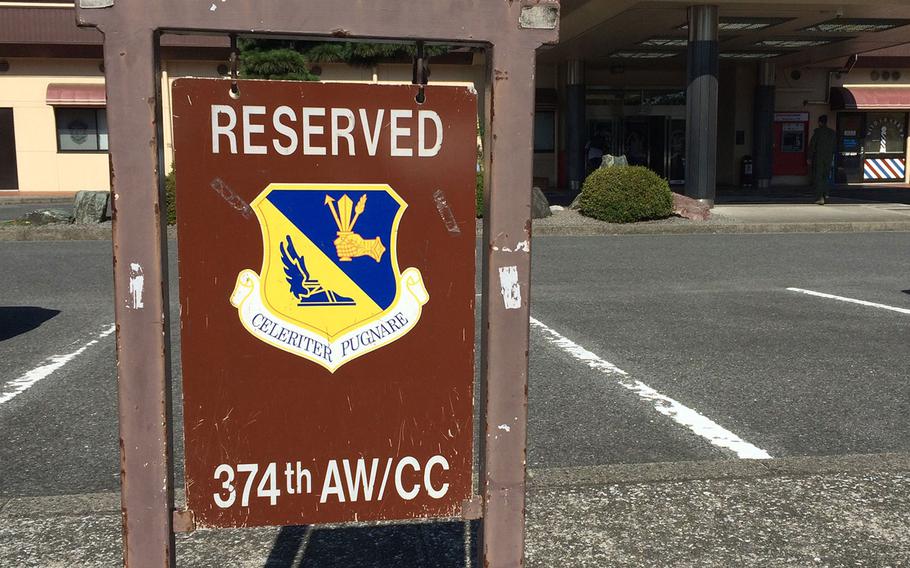 YOKOTA AIR BASE, Japan — When Col. Kenneth Moss, commander of the 374th Airlift Wing, arrived at Yokota’s Enlisted Club for a morning meeting last Thursday and discovered a car parked in his reserved space, it seemed like an airman was about to have a very bad day.

“I thought that was pretty bold, so I parked in front of the car until my meeting was over,” Moss said in emailed comments Monday.

At the home of U.S. Forces Japan and 5th Air Force in Tokyo, prime parking is reserved for top military leaders at clubs and other facilities such as the gymnasium and commissary.

Yokota doesn’t have parking fines but military discipline means the reserved spots are usually vacant, even on busy days when lots around them are at capacity. And locals have a habit of posting photos of poorly-parked vehicles online to shame the perpetrators.

While Moss was inside, somebody snapped an image of his car blocking the airman’s vehicle and posted it on a military Facebook group, prompting hundreds of comments and speculation that somebody was in for a rough time.

However, when Moss got back to his car and spoke to the airman parked in his spot he decided the enlisted man had made the right call.

“An airman and his wife had left their car there after having drinks the night prior and didn’t want to be irresponsible,” Moss explained. “I reassured them I wasn’t mad.”

Moss did not identify the airman.

“Parking that way allowed me to thank an airman and his family as well as uncover a problem,” he said.

It turned out that not only had the couple made a responsible choice in not driving after enjoying a few drinks, the space wasn’t even marked as reserved when they’d parked.

The wing commander’s parking space is marked in two ways — a curbside label and a removable sign hanging from a frame. But the curbside label had fallen off and the sign was only hung when the commander had official business at the club.

“The signs were placed after the car was already in the spot so the airman did nothing wrong,” Moss said.

The wing commander said he told enlisted club staff that while he appreciates a designated parking spot, it doesn’t have to be in the same place every time.

“I think we fixed a problem this day!” Moss said.