Airman, partner united in same-sex ceremony on New Jersey base 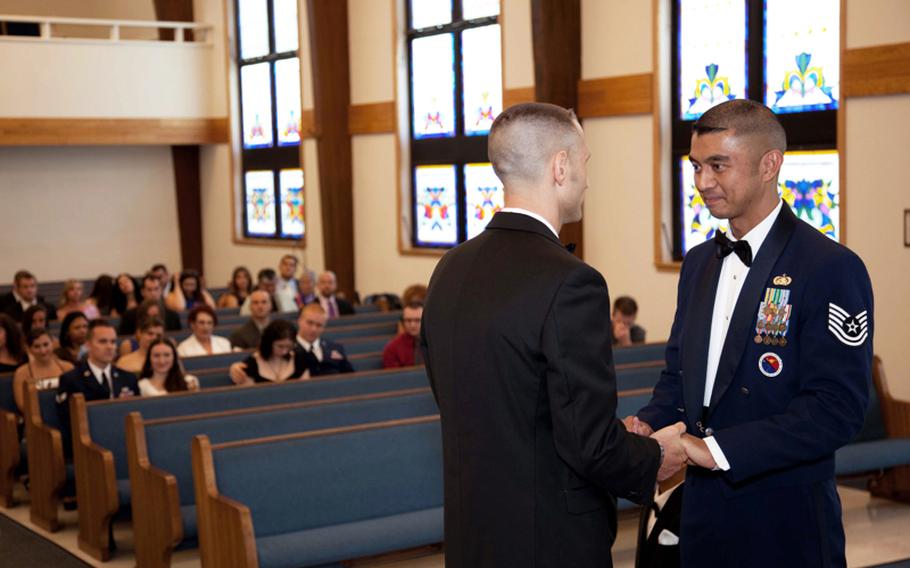 Air Force Tech. Sgt. Erwynn Umali, right, and his partner Will Behrens hold hands during their civil union ceremony Saturday at Joint Base McGuire-Dix-Lakehurst, the military base in Wrightstown, N.J. where Umali is stationed. (Jeff Sheng/The Associated Press)

Air Force Tech. Sgt. Erwynn Umali and his partner, Will Behrens, were united in a civil union ceremony Saturday at Joint Base McGuire-Dix-Lakehurst, according to an article filed by The Associated Press running on the San Francisco Chronicle's website.

The ceremony was performed at the base chapel by Navy chaplain Kay Reeb, according to the article, and attended by dozens of friends and family.

Reeb, a Navy chaplain with the Evangelical Lutheran Church in America, said it was her first time presiding over a civil union ceremony and she was delighted to take part.

The couple issued a statement carried in the article: "We are so honored to be a part of this historic moment to be one of the first gay couples allowed to unite in a civil union on a military base."

"We hope to be an inspiration to others in the LGBT community that struggle with the challenge of marriage equality. And that this issue is not just about the military, but the equal sacrifice and shared burdens of our loved ones who are civilians."