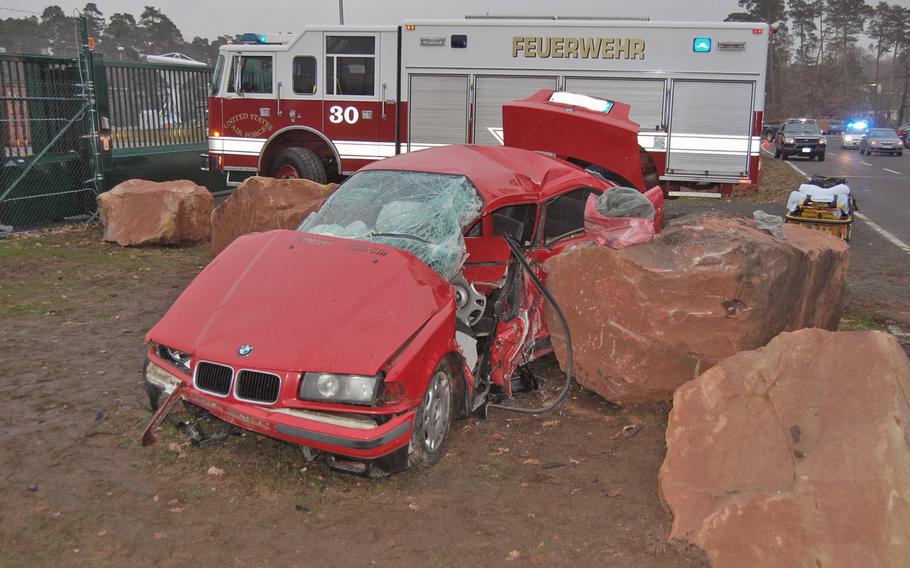 A police photo shows the wreckage after a fatal one-car accident on Ramstein Air Base, Germany, on Wednesday, Dec. 4, 2013. Airman 1st Class Jonathan Santos-Carvajal, 20, of Yuba City, Calif., died at a hospital in Kaiserslautern after the crash. (Courtesy Polizei Praesidium West)

KAISERSLAUTERN, Germany — An airman who died after a one-car crash on Ramstein Air Base was identified Thursday as Airman 1st Class Jonathan Santos-Carvajal, 20, of Yuba City, Calif.

Santos-Carvajal was declared dead at 9:23 a.m. Wednesday at the Westpfalz Klinikum, a hospital in Kaiserslautern, roughly two hours after the BMW he was driving slammed into a boulder on the east side of the air base, according to a release from the Air Force’s 86th Airlift Wing.

Santos-Carvajal was on his way home from work and reportedly attempting to pass another vehicle at about 7:30 a.m. Wednesday when he lost control of his car, skidded and slammed driver’s-side first into a sandstone boulder on the side of the road, according to information gathered from the Landstuhl police department, and the 86th Airlift Wing.

Santos-Carvajal was pinned inside. Rescue workers from the base’s fire department extracted him from the wreckage, while a passenger was able to get out of the car unassisted, according to German police.

The passenger was taken to Landstuhl Regional Medical Center for treatment and released, according to the release from the 86th Airlift Wing. Juan Melendez, a spokesman for the base, said he could not provide any details about the passenger because information about injured personnel “is not releasable.”

The road on which the accident occurred connects the base’s perimeter road with the Arnold traffic circle, and is apparently unnamed, according to Melendez. Signs indicate a speed limit of 30 kilometers per hour (roughly 18.6 miles per hour).

Asked whether speeding, alcohol or other substances may have been a factor in the crash, Melendez said only that the accident is “under investigation.”

Santos-Carvajal arrived at Ramstein in May 2013, assigned as an aerospace maintenance apprentice to the 86th Airlift Wing.

In a press release, Brig. Gen. Patrick X. Mordente, 86th Airlift Wing commander, said “He will be sorely missed and our thoughts and prayers are with his family and his friends.”

Details about a memorial service for Santos-Carvajal will be released at a later date, Melendez said.

Stars and Stripes reporters Jennifer Svan and Marcus Kloeckner contributed to this report.