Airman involved in crash that killed German teen near Ramstein 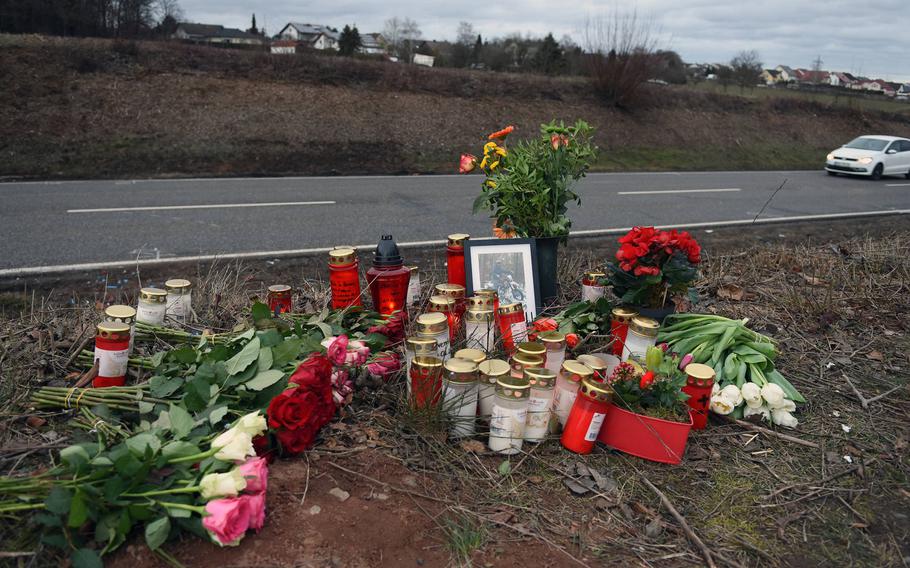 A roadside memorial of flowers and candles was created for a German teenager killed Wednesday in a car crash near Weilerbach, Germany, involving a young airman assigned to Ramstein Air Base. (Jennifer H. Svan/Stars and Stripes)

A roadside memorial of flowers and candles was created for a German teenager killed Wednesday in a car crash near Weilerbach, Germany, involving a young airman assigned to Ramstein Air Base. (Jennifer H. Svan/Stars and Stripes) A German teenager on a three-wheel vehicle was killed Wednesday evening on a stretch of road outside of Ramstein Air Base, Germany, after being hit head-on by an airman first class stationed at the base. (Courtesy Weilerbach Fire Department)

KAISERSLAUTERN, Germany – A young airman new to Ramstein and the Air Force was the driver of a car that struck and killed a German teenager in a head-on crash Wednesday night near the base, German and base officials said Friday.

The crash occurred at about 6:45 p.m. on the L367, a two-lane road between Mackenbach and Weilerbach, only a few minutes’ drive from Ramstein Air Base.

The 20-year-old airman first class was driving a Chevrolet with his wife in the direction of Weilerbach when he passed another car, according to the Weilerbach Fire Department.

After passing the car, the airman failed to return to his lane and crashed head-on into a Piaggio Ape, a three-wheeled light commercial vehicle with a Vespa scooter as a base. The impact of the crash sent the vehicle flying over a scooter that was driving behind it, where it then crashed into a car, a Kaiserslautern police statement said. The 17-year-old driver, a student at a local German high school, was thrown from the Piaggio and died at the scene, police said.

The airman and his wife, a civilian, were treated for injuries at a local German hospital and released Thursday, a base official said.

The couple was still in temporary lodging, being new to Ramstein for what was the airman’s first assignment in the Air Force, the official said.

Officials did not identify the airman or the victim.

The commander of the 86th Airlift Wing, Brig. Gen. Mark August, called Weilerbach Mayor Anja Pfeiffer on Thursday to express sympathies, according to base officials.

August also released a statement relaying “our deepest condolences. As a parent of a 17-year-old and 18-year-old myself, I can only imagine the pain felt by another parent at the loss of their child. This is a tragedy for our community, and we will work with our German partners to investigate this accident,” he said.

Base officials said the crash is under investigation and security forces are working with German police.

Udo Strasser, the chief of Weilerbach’s fire department, told Stars and Stripes on Friday that the accident was especially tragic for firefighters called to the scene, since they knew the German teen personally. The stretch of road where the crash occurred is known to be dangerous, he said.

The center line at the site indicates a passing zone, but the road is curved, which limits visibility.

On Friday afternoon, family and friends of the German teenager killed in the wreck gathered by a roadside memorial of fresh flowers and candles near the crash site, hugging and crying. In the group was the teen’s grandmother and two younger sisters. They said that their brother’s name was David and he lived in Weilerbach. A framed photograph of a boy on a motorbike was placed at the memorial.

“He was the best person I ever met,” said his 15-year-old sister, Miriam, declining to give her last name. “He didn’t deserve to die.”