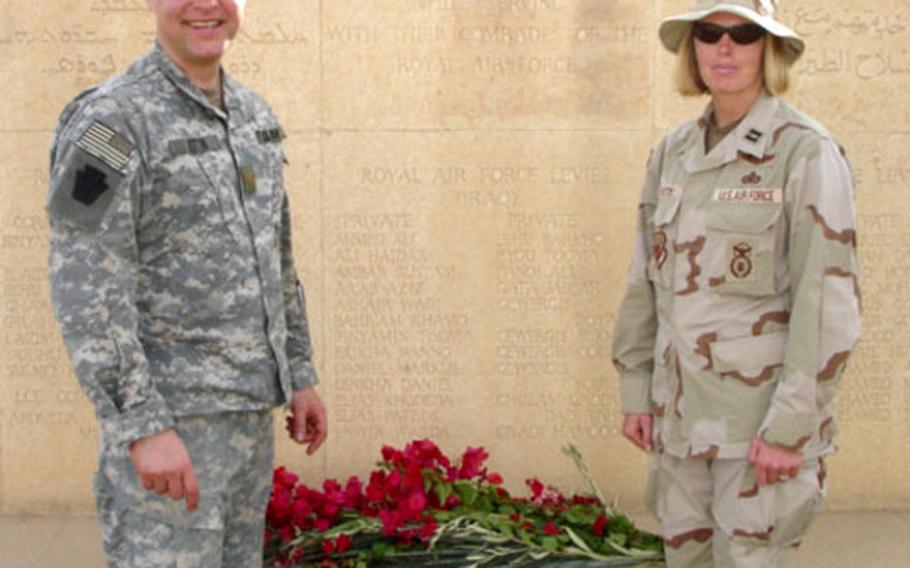 U.S. Air Force Capt. Jutta Cortes stands with another servicemember alongside the memorial wall at the RAF Habbaniyah Cemetery in Iraq. (Courtesy of Jutta Cortes)

RAF MILDENHALL &#8212; An Air Force captain has made a name for herself by caring for the dead.

Capt. Jutta Cortes was recently rewarded for her tireless work to refurbish a Royal Air Force cemetery in Iraq with an invitation to ride in Britain&#8217;s annual Remembrance Day parade in London.

&#8220;It was so touching to see the [Iraqi] soldiers take an interest and help us clean up this sacred ground,&#8221; Cortes wrote in an e-mail.

The story of Cortes and her campaign to honor the deceased at what was a derelict RAF cemetery began more than 80 years ago, in 1927, when Britain and Iraq agreed to create RAF Habbaniyah.

During World War II, the installation came under attack by an Iraqi dissident and 162 British and Commonwealth troops perished before the Allies ultimately staved off the invasion. By British tradition, the troops were buried where they died.

The cemetery, built on the bank of the Euphrates River 60 miles from Baghdad, was well-kept for more than a decade, as evidenced by a 1956 picture of the cemetery with irrigation canals, green grass, well-manicured bushes and orange trees.

However, sometime in the past 50 years the cemetery fell into disrepair through neglect and vandalism. The green grass turned into brown clay, the flowers perished and the trees failed to yield oranges.

That is how Cortes, a Security Forces officer at F.E. Warren Air Force Base in Wyoming, and her team of fellow American servicemembers found the cemetery when they deployed to Iraq last year. So the 20-year Air Force veteran took it upon herself to lead a team of volunteers in restoring the cemetery to its former glory.

Like almost any task in Iraq, the project was not without peril.

&#8220;The cemetery was located on the perimeter of the camp and insurgents were only a few hundred meters from us,&#8221; Cortes wrote.

&#8220;On the last day we actually took incoming mortar fire to the camp with the closest mortar landing 125 meters from the cemetery.&#8221;

The volunteers labored through the Iraqi heat and insurgents&#8217; fire to complete the project before holding a ceremony, complete with a 21-gun salute, on behalf of the RAF Habbaniyah Association.

The restoration project was especially important to Chris Morris, honorary secretary of the RAF Habbaniyah Association.

For her efforts, Cortes was invited to join scores of RAF veterans to march in England&#8217;s largest event to honor war veterans.

&#8220;When Dr. Morris got permission for me to march in the parade, I was thrilled and planned on taking leave and flying there on my own,&#8221; Cortes wrote. &#8220;But what a surprise when I saw an e-mail stemming from [Air Force Chief of Staff] Gen. [T. Michael] Moseley all the way down to my command ensuring I&#8217;d be there in November. What an unexpected thrill and honor.&#8221;