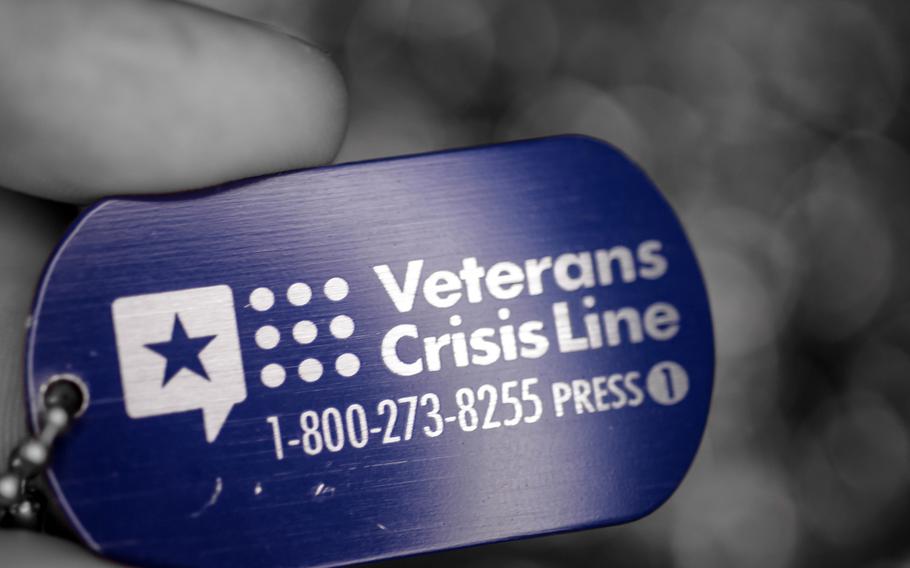 Telephone number of the Veteran's Crisis Line is shown on this tag. The intervention of a rookie Office of Special Investigations officer on Reddit last week may have saved an airman's life. (Photo illustration by Zachary Hada/U.S. Air Force)

Online commenters worried about privacy might not like the idea of special agents among readers in online forums, but last week an Office of Special Investigations rookie on Reddit may have saved a fellow airman’s life after noticing signs of distress in a message board frequented by airmen.

On the social media site’s section for the Air Force, Senior Airman Charles Woomer noticed a subtle cry for help among posts complaining about LeaveWeb and inquiring about making the transition to the Guard and Reserve. Others did, too, according to an OSI statement issued Friday, but Woomer took action.

A poster asked how his group life insurance policy would pay out if “something” happened before he separated from the military. The person — he would turn out to be a suicidal husband and father — wanted to make sure his family would be comfortable.

Woomer, a special agent with the Air Force Office of Special Investigations Detachment 322 at Fairchild Air Force Base, Wash., was one of several “Redditors” who noticed a worrisome tone in the post. He notified his leadership, and with guidance from Senior Airman Justin Collins, he contacted officials with Reddit and Google to identify the original poster.

Tracking down the airman’s leadership was the next challenge. Wednesday, the day after Woomer noticed the post, was a training holiday, and it would take him and Collins 25 calls to get in touch with the airman’s supervisor, who then notified the unit first sergeant and went to the original poster’s home.

The airman, who was scheduled to separate on April 28, confirmed to his supervisor he had made the post and intended to hurt himself before the end of the week. He was taken to a medical facility for treatment.

Suicidal thoughts were not new for the airman, who had previously been diagnosed with depression but had run out of prescribed medication. The Air Force statement, which did not identify the airman, said the thoughts of self-harm likely returned because of the lapse in medication.

In Georgia, the airman’s spouse and command thanked Woomer and Collins for intervening. Had they not stepped in, officials said, the airman could have left behind a spouse and two children under the age of 10.

“This gives me warm fuzzies,” said one user, who claimed to have seen the original post and had wondered what came of it.

Some joked that the news was evidence OSI was spying on the online forum, but others offered praise, including one user who hoped the special agent would spot their comments.

“Good job man,” wrote the user. “You did a great thing. I hope you get some recognition for this, and most importantly I hope the airman receives the help he needs. Thank you from everyone who has had suicide (affect) them.”

Servicemembers and veterans who are in crisis can get free, confidential support around-the-clock by calling, texting or clicking the Military Crisis Line.

A user on the Army subreddit last week shared his story of dealing with intrusive suicidal thoughts by reaching out for help, as he had been trained to do. Strategies learned in resiliency training and suicide prevention briefs, together with supportive friends, helped “process out” the feelings.

“These people literally saved my life this week,” wrote the user, who goes by the handle psychopete. “Today I scheduled myself for therapy and I’m active in an online support group at least until my first session. I won the battle and I’m prepped for war. I’m gonna make it.”garland.chad@stripes.comTwitter: @chadgarland