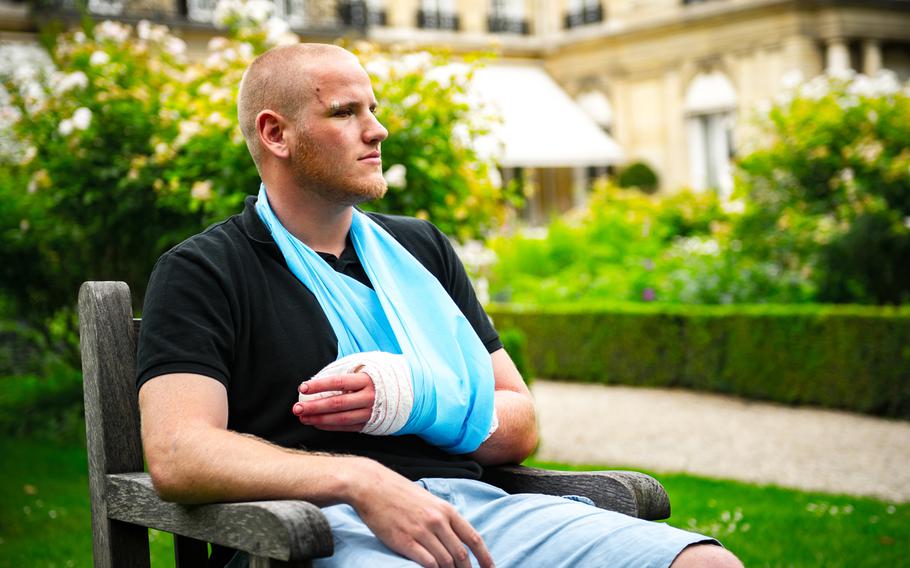 U.S. Airman 1st Class Spencer Stone is interviewed in Paris Aug. 23, 2015, following a foiled attack on a French train. Stone was on vacation with his childhood friends, Aleksander Skarlatos and Anthony Sadler, when an armed gunman entered their train carrying an assault rifle, a handgun and a box cutter. The three friends, with the help of a British passenger, subdued the gunman after his rifle jammed. (Ryan Crane/U.S. Air Force)

U.S. Airman 1st Class Spencer Stone is interviewed in Paris Aug. 23, 2015, following a foiled attack on a French train. Stone was on vacation with his childhood friends, Aleksander Skarlatos and Anthony Sadler, when an armed gunman entered their train carrying an assault rifle, a handgun and a box cutter. The three friends, with the help of a British passenger, subdued the gunman after his rifle jammed. (Ryan Crane/U.S. Air Force) 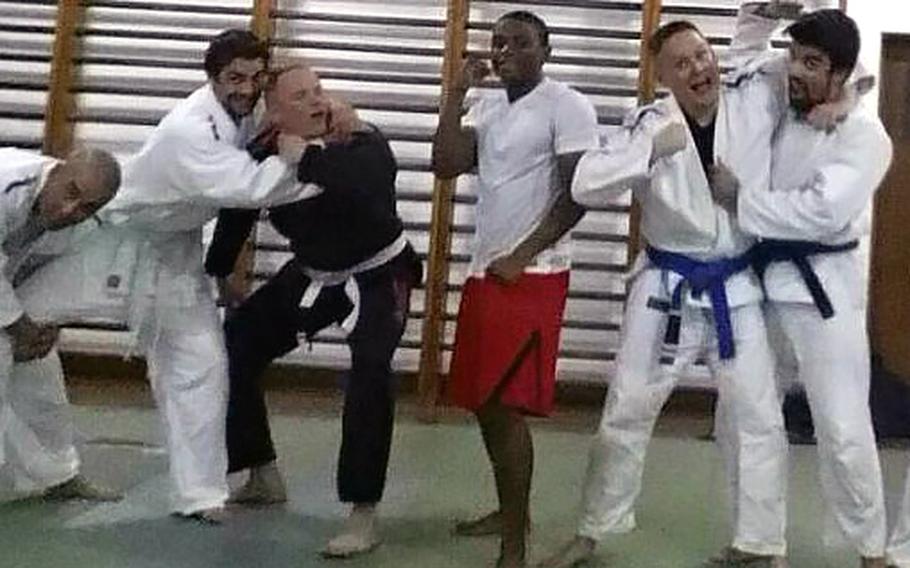 Airman 1st Class Spencer Stone wearing a white belt in black exercise gear is seen in jiu jitsu training session in Portugal where he is stationed at Lajes Field. (Facebook) 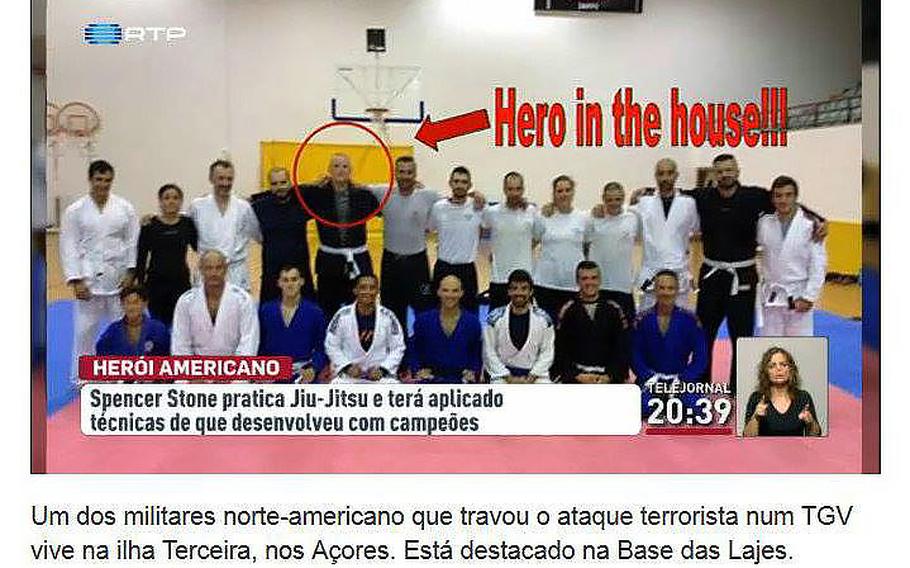 Spencer Stone is circled in red and an arrow points to him with the message "hero in the house" as he is seen with a group during jiu jitsu practice in Portugal where he is stationed at Lajes Field. (Facebook) 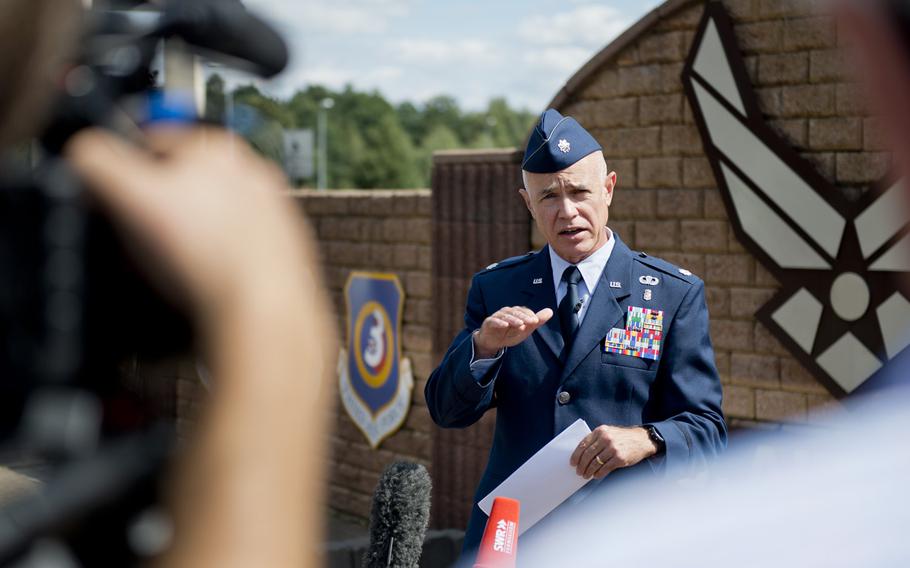 RAMSTEIN AIR BASE, Germany — Airman 1st Class Spencer Stone, who has been hailed for his heroism in taking down a gunman on a train from Amsterdam to Paris with a choke hold, was a devoted martial arts student, his commander told reporters here Wednesday.

“He is a student of Gracie jiu jitsu,” said Lt. Col. Richard Smith, commander of the 65th Medical Support/Medical Operations Squadron at Lajes Field, Azores, where Stone is assigned. “At Lajes, there was a small community of devotees of jiu jitsu. He fell in with them.”

Those skills — jiu jitsu focuses on grappling and ground fighting and teaches students how to apply a choke hold — may have given Stone the edge over a heavily-armed gunman he helped bring down on board the high-speed train Friday.

“I was speaking with Airman Stone last night,” Smith said. “One of the things that he mentioned was that experience absolutely helped him to understand what he needed to do to subdue the attacker.”

Awaking from a deep sleep, Stone had to act quickly, after his friend, Alek Skarlatos, tapped him on the shoulder and said “let’s go.” They tackled the gunman as he fumbled with his AK-47 rifle and Stone choked him unconscious.

Smith spoke to about a dozen reporters outside the gate of Ramstein Air Base, which is a few miles down the road from Landstuhl Regional Medical Center, where Stone is currently being treated for injuries he received in the attack. He arrived here Monday from Paris, where he, Skarlatos and their friend Anthony Sadler recounted what they did at a news conference Sunday.

In a statement from Stone read by Smith, the 23-year-old airman said he wasn’t available to the media here due to medical appointments and therapy.

But, Stone said, he wanted to “provide a few things on my mind.”

“Thank you to everyone who has reached out to wish me and my friends well and who have called us heroes,” he said. “Looking back and thinking of that fateful day, I know we did exactly what needed to be done.”

Stone and his friends, Skarlatos, 22, an Oregon National Guardsman, Sadler, a 23-year-old college student, are being hailed as heroes for helping to foil an apparent terror attack while vacationing together in Europe. On Sunday, the three Americans received the Legion of Honor — France’s highest award for valor. The military services have also stepped up to recognize Stone and Skarlatos with prestigious medals for bravery.

The Air Force announced Monday that it is awarding Stone its highest non-combat honor, the Airman’s Medal. Stone also aided a passenger on the train, who was bleeding badly from the neck after being shot.

The Army said Tuesday that Skarlatos will receive the Soldier’s Medal, the highest honor a soldier can receive for an act outside of combat.

“Alek Skarlatos is exercising his freedom to travel throughout Europe as an American citizen in a non-duty status,” a public affairs official with the 86th Airlift Wing at Ramstein said in a statement.

However, Thomas Mueller, a soccer player with German champion Bayern Munich, posted a photo on Twitter Wednesday with Skarlatos, with the hashtag “#Thalys-hero Alek Skarlatos.” Skarlatos was invited to attend the team’s closed training session in Munich. Skarlatos was wearing Mueller’s jersey while riding the Thalys-operated train that came under attack.

Sadler returned to college in California earlier this week, The Associated Press reported.

It’s not known yet how long Stone will remain at Landstuhl and when he might return to his unit at Lajes, where he works as an ambulance services technician. He’s expected to recover fully from his wounds, which include a lacerated thumb and what Smith described as a “non-critical injury to his eye.”

“Since arriving last night, I’ve had the opportunity to spend some time with Airman Stone and his family,” Smith said. “He’s recovering. His wounds are healing. He’s in good spirits.”

Stone’s care providers expect “that in the coming months, he’ll be able to return to full duty.”

Reporters Marcus Kloeckner and Tara Copp contributed to this report.svan.jennifer@stripes.com