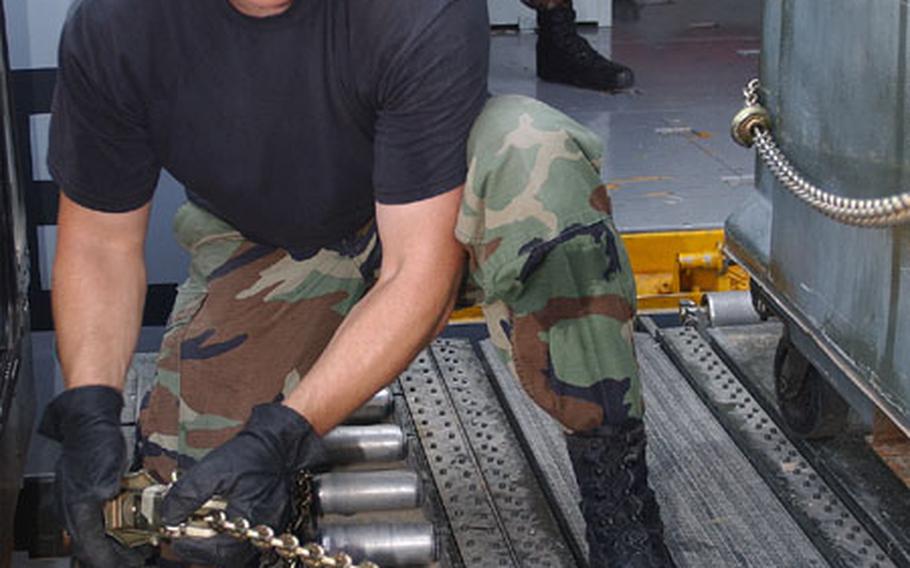 Staff Sgt. Raymond Moose, an aircraft services shift supervisor for the 728th Air Mobility Squadron, ties down cargo on the flight line at Incirlik Air Base, Turkey. Moose was recently selected as a member of the Thunderbirds team. (Courtesy of USAF)

Last month, the airman, stationed at Incirlik Air Base in Turkey, discovered that he had earned a spot on the elite U.S. Air Force Thunderbirds air demonstration team.

An aircraft services shift supervisor for the 728th Air Mobility Squadron, Moose will report to Nellis Air Force Base, Nev., in October. He will serve a three-year tour as an airlift coordinator.

As one of the two airlift coordinators, Moose will be responsible for transporting support people, extra pilots and equipment for the Thunderbirds.

Moose has been in the Air Force for six years, but said it wasn&#8217;t until he became a noncommissioned officer that he considered applying to the elite team.

After several people he worked with encouraged him to apply, Moose began the application process in April. He was one of 16 people to apply.

Then came the hardest part: the waiting. On Aug. 4, Moose was notified of his selection.

While he is not totally sure of what to expect when he arrives at Nellis next month, he does know that he will be well-versed in Thunderbird history by the end of his training.