Airman continues on musical path with Tops in Blu 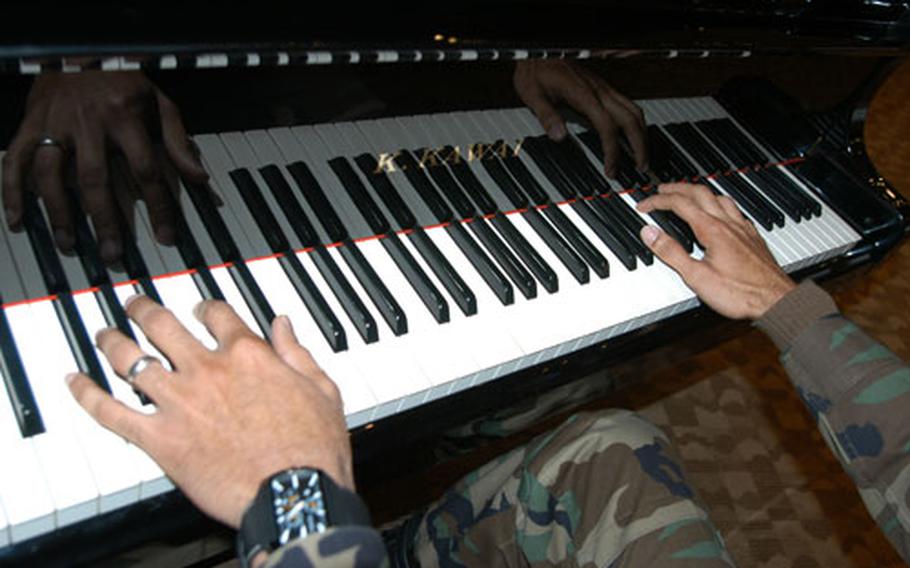 Tech. Sgt. Lamon L. Mabron will have to commit about 70 songs to memory as keyboardist for the 2008 Tops in Blue team. (Jennifer H. Svan / S&S)

Tech. Sgt. Lamon L. Mabron will have to commit about 70 songs to memory as keyboardist for the 2008 Tops in Blue team. (Jennifer H. Svan / S&S) Mabron is one of two military members from Pacific Air Forces to make this year&#39;s team of traveling entertainers. (Jennifer H. Svan / S&S)

MISAWA AIR BASE, Japan &#8212; When Tech. Sgt. Lamon L. Mabron shipped off to boot camp fresh out of high school, he figured he was kissing his dream of a music career goodbye.

A classical pianist who started playing at 12, Mabron never gave up music. He found nightclubs and bands to play in wherever his Air Force career took him.

A poster at Misawa&#8217;s Mokuteki Community Center caught his eye.

Last fall, the base&#8217;s community center hosted a Tops in Blue audition, taping airmen and their talents and sending the videotape to Tops In Blue headquarters in San Antonio, Texas, base officials said.

Also on the team from PACAF is vocalist Oliver Dagum of the 734th Air Mobility Squadron at Andersen Air Force Base, Guam.

Mabron was a state champion pianist in high school, but earning a spot with Tops In Blue was far from a given, he said. Personality, attitude and ability to work with others are considered alongside talent, Mabron said.

At the Tops In Blue worldwide talent competition last month in San Antonio, where the final cuts were made, Mabron was grouped with 10 other people. It felt like being part of the MTV reality show &#8220;The Real World,&#8221; he said.

On the stage, Mabron not only had to dazzle everyone on the keyboards, but he had to dance, act, sing and try comedy.

The 2008 tour kicks off Feb. 2 and will consist of about 125 shows in Europe, throughout the Pacific, in the States and in combat zones, according to an Air Force news release.

Mabron, who works for the 35th Logistics Readiness Squadron at Misawa, loves his sleep but will gladly give up some shut-eye to play keyboard for a year, he said.

Tops In Blue is looking for a few good airmen for its 2008 tour.

&#8220;We&#8217;re looking to fill a complete band,&#8221; Jeri White, production manager for Air Force Entertainment, said in the release. &#8220;Applicants don&#8217;t have to have professional training to qualify. They can be self-taught. All they need is talent, a strong work ethic and the desire to improve during the touring season.&#8221;

Vehicle operators are needed to drive the Tops In Blue custom motor coach and tractor-trailer truck throughout the United States during the tour, the release said.

Interested airmen can call Air Force Entertainment at (210) 652-6566, or go to www.topsinblue.com for more information.