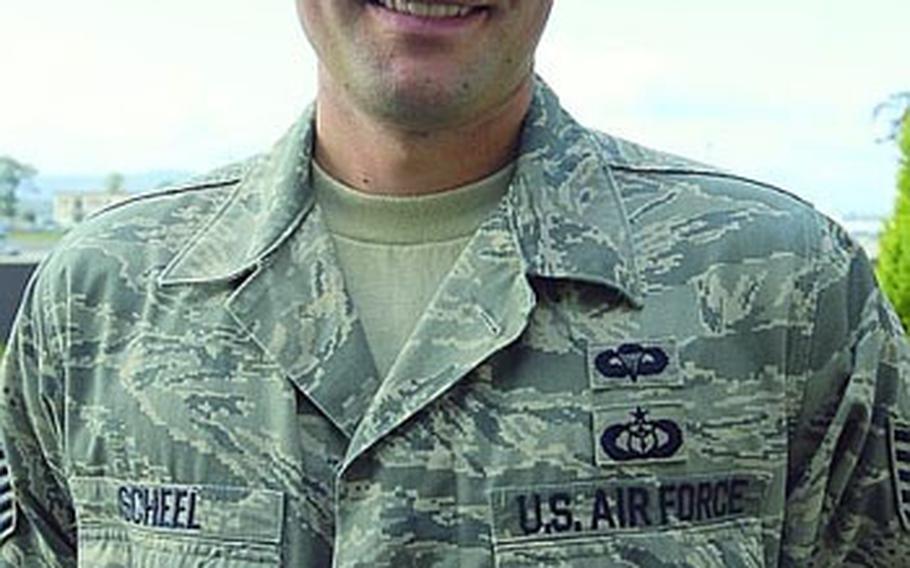 Buy Photo
Tech. Sgt. Robert H. Scheel wears the Air Force Combat Action Medal. Scheel is one of nearly 5,000 airmen to get the medal since the Air Force began awarding it in 2007. (Jennifer H. Svan/Stars and Stripes)

RAMSTEIN AIR BASE, Germany &#8212; Judging by the number of Air Force Combat Action Medals awarded, there are many airmen with war stories to tell.

Since 2007, when the U.S. Air Force introduced the gold-and-scarlet device for airmen engaged in air or ground fighting in combat zones, the service has handed out 4,875 combat medals, officials said.

The Air Force has granted the medal to 78 percent of applicants to date, according to Air Force figures.

The unit&#8217;s commander, Col. Thomas Gould, pinned the medal on Scheel during a short ceremony at Ramstein.

Though it had been six years since Scheel and fellow airman Tech. Sgt. Mark Sterling were part of an Army convoy ambushed in Babil province, Iraq, the medal hadn&#8217;t lost its luster, Scheel said.

"Before, we really didn&#8217;t get recognized for the things that we did," Scheel, 34, said of airmen in nontraditional combat roles. "I&#8217;m honored, definitely."

Both Sterling and Scheel at the time of the incident were staff sergeants with the 18th Weather Squadron at Fort Bragg, N.C., and deployed with the Army&#8217;s 82nd Airborne Division. Sterling also received the Air Force Combat Action Medal, Scheel said.

The Sept. 18, 2003, ambush was quick &#8212; no more than 45 seconds to a minute, Scheel estimates &#8212; and close. Scheel saw muzzle flashes and individuals firing from an overpass he and Sterling had to drive under. A rocket-propelled grenade that turned out to be a dud landed about 20 yards from them. No one in the convoy was injured.