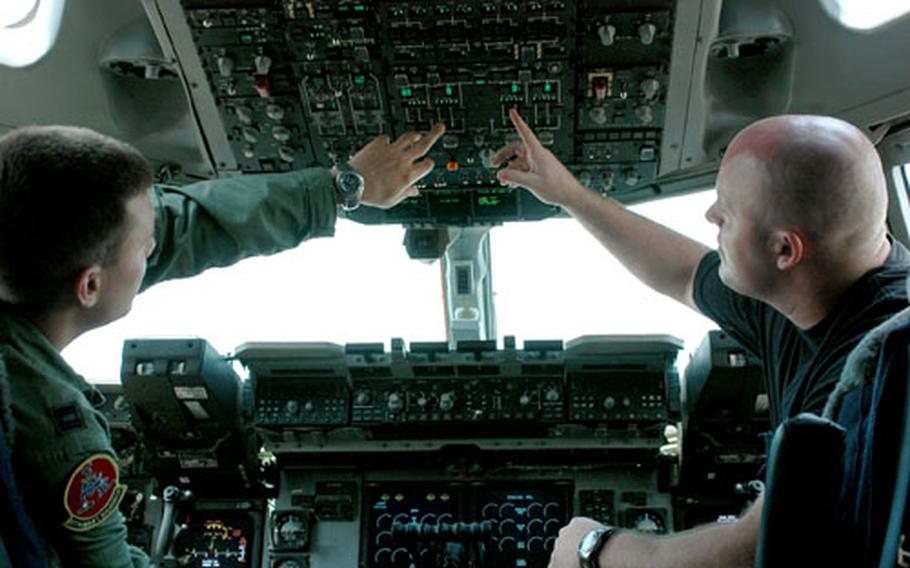 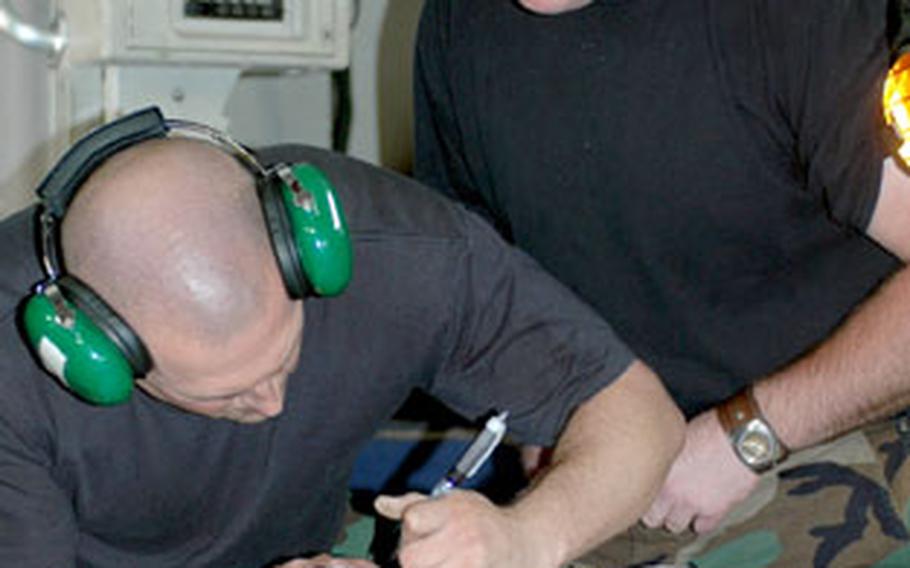 Staff Sgt. Roy Eilenstine, right, a crew chief with the 730th Air Mobility Squadron at Yokota Air Base, Japan, performs a fuel leak check on a C-17 during the transfer of fuel from one side of the aircraft to the other. (Karen J. Tomasik / U.S. Air Force)

YOKOTA AIR BASE, Japan &#8212; It took about five years for doctors to locate a possible match, but a 730th Air Mobility Squadron crew chief was whisked away last month to donate bone marrow at Georgetown University in Washington, D.C.

Staff Sgt. Roy Eilenstine, 26, of Mountain Grove, Mo., says he was inspired to have his name in the National Marrow Donor Program&#8217;s Registry about five years ago after his grandmother died of cancer. He wanted to give other people with leukemia, lymphoma and other blood diseases a shot at recovery.

Eilenstine, who&#8217;s trained as a crew chief on C-5 and C-17 aircraft, took the first step toward becoming an anonymous donor in 2001 during a registry drive at Davis- Monthan Air Force Base, Ariz.

Normally, a small blood sample or swab of cheek cells is taken and tested to determine the donor&#8217;s tissue type. Once that information is added to the NMDP Registry, it becomes available to doctors searching for a match for their patients.

Eilenstine&#8217;s wait ended in April when he was brought in to provide several additional samples. Those are taken from the arm; the bone marrow donation itself comes from the pelvic bones.

Eilenstine was granted three-week permissive temporary duty status to undergo the May 15 procedure at Georgetown, which took about five hours, required anesthesia and included a recovery spell in post-op.

His wife, Kimberly, a secretary at Yokota&#8217;s 374th Operations Group, took leave to accompany her husband to Washington.

According to the NMDP&#8217;s Web site at www.marrow.org, a transplant replaces a patient&#8217;s unhealthy blood cells with healthy blood-forming cells from a volunteer donor. Potential donors must be 18-60 and meet health guidelines &#8212; but finding a match is no small task.

&#8220;I was stationed with a guy in Ellsworth whose sister had leukemia. I saw what he went through. It can be pretty difficult when you&#8217;re not even guaranteed your own sibling is a match. For him to step up and be a match with anybody, I think it&#8217;s great.&#8221;

According to donor guidelines, Eilenstine and the recipient can try to track each other down next year, but the airman says he hasn&#8217;t decided if he&#8217;ll attempt contact.

Following the bone marrow procedure, Eilenstine couldn&#8217;t do any heavy lifting on the flight line or run for two weeks. He&#8217;s back to normal now but must wait at least six months before donating a second time.