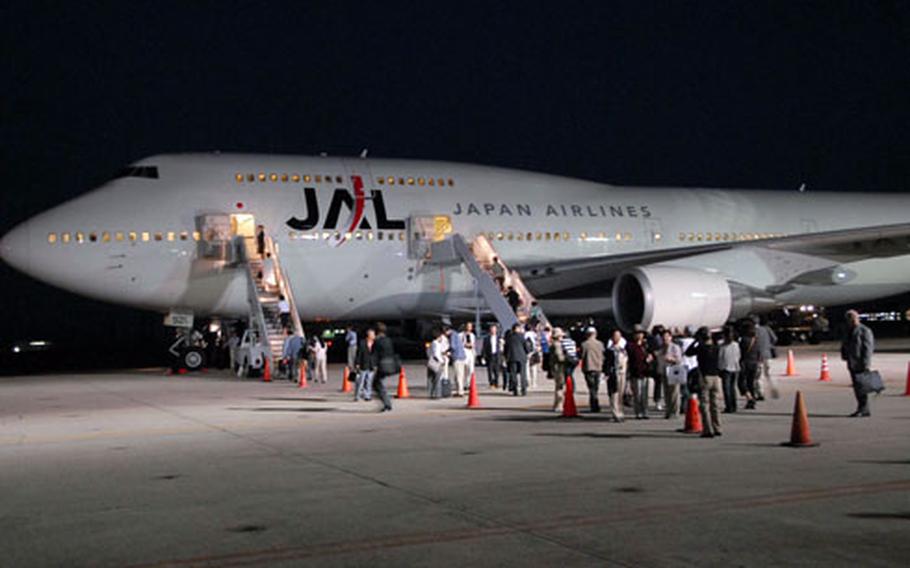 About 250 Japanese travelers board a rare commercial flight on Oct. 1, 2007, from Marine Corps Air Station Iwakuni, Japan, to Hawaii. Japanese commercial airlines could begin service at the air station by 2012, the Japanese government said this week. (Travis J. Tritten/Stars and Stripes)

A new commercial runway is to be built after the U.S. military completes its runway expansion project at the air station, an official with the ministry&#8217;s Civil Aviation Bureau said.

The move could increase the options for traveling servicemembers, who often must commute to Hiroshima, Fukuoka or other far-off airports to catch commercial flights. The military-run Patriot Express will begin serving Iwakuni again in April but stops are limited to mainland Japan, Okinawa and Seattle. As of now, that service is guaranteed only through September.

In Iwakuni city, officials rejoiced at the news this week after working with the local prefecture government for years to gain air service in the area. Demand for the service is expected to be high.

"According to our estimate, about 430,000 people will use the airport in a year," city spokesman Taketo Mochizuki said. "The convenient location of the airport, which is only about five minutes away from Iwakuni JR Station, is also a great advantage."

He said that four round trips, a total of eight flights, to and from Tokyo&#8217;s Haneda Airport by All Nippon Airways are being considered.

"It&#8217;s been an aspiration for a lot of the folks here in the local community to resume [commercial] flights from MCAS Iwakuni," said Maj. Guillermo Canedo, a spokesman for the air station. "This will simplify travel significantly."

The air station&#8217;s $2.4 billion military runway project, which was started in 1997, is to be completed by March 2011 and Iwakuni city and Yamaguchi Prefecture have requested commercial service by 2012, said a spokesman for the Ministry of Defense.

"We will make our utmost effort to meet their expectation," the spokesman said. "The timeline, however, is not yet negotiated with the U.S. military."

The military runway project has been delayed repeatedly over the years. In August, the Ministry of Defense pushed back the projected completion date to 2010, two years later than expected, due to bid-rigging allegations in the Iwakuni city government.

The 2011 date released this week is a further delay of the runway project.

Meanwhile, the logistic concerns of sponsoring commercial flights from a military installation, which include traffic, baggage checks, civilian access and parking, also have yet to be worked out, according to the air station and the Japanese Ministry of Defense.

Canedo said both sides are discussing the issues. A ministry spokesman said a discussion on coordination, such as hours in which the airlines will operate and joint use of the land, is under way with the U.S. military.

The air station hosted commercial flights in the 1950s and 1960s and the arrangement would not be unique.

At Misawa Air Base in northern Japan, U.S. Air Force and Navy aircraft share a runway with Japan&#8217;s Air Self-Defense Force and a small adjacent commercial airport. Kunsan Air Base in South Korea has a similar arrangement.

The United States and Japan in 2005 agreed to a resumption of commercial service at Iwakuni as part of the plan to realign U.S. military forces.

"Commercial aviation operations of four round trips per day would be allowed as long as such operations do not compromise U.S. military operational requirements," according to the realignment road map.