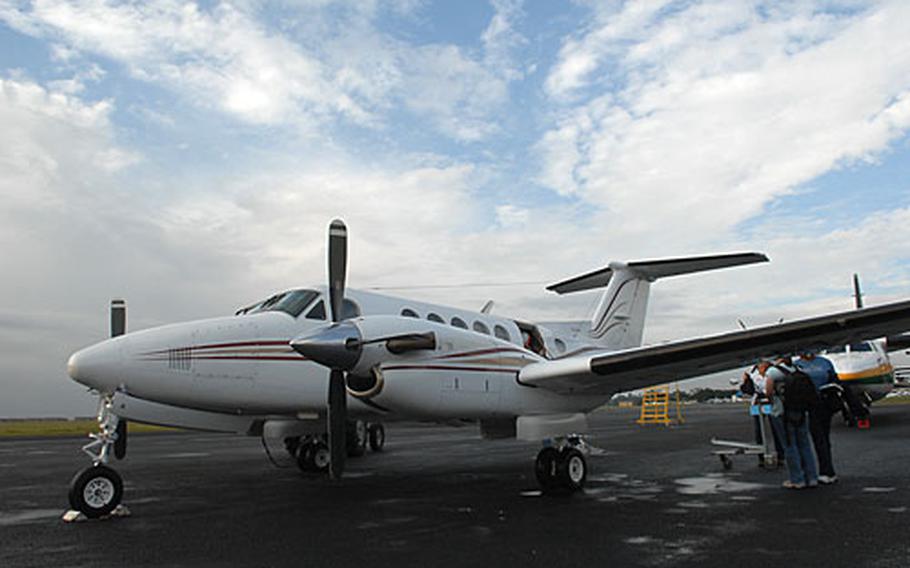 Small airline-operated planes such as this one are being contracted by Camp Lemonier and the Combined Joint Task Force-Horn of Africa to spare U.S. military pilots and aircraft the time and effort of flying into rugged, unfamiliar territory. (Zeke Minaya / S&S)

Shaw should know. He is a self-proclaimed &#8220;Kenyan Cowboy,&#8221; an African bush pilot who may have seen nearly every stretch of bumpy, dirt trail on the continent called a runway.

Nickname aside, Shaw is far from a hot dog. He recently completed more than 28,000 hours flying after roughly 40 years as a pilot, including a stint with British Airways.

Shaw, a 59-year-old Kenya native, has been putting his considerable experience flying on the continent to the service of the U.S. military mission in Africa. Shaw is part of a small airline that has been contracted by Camp Lemonier and the Combined Joint Task Force-Horn of Africa to spare U.S. military pilots and aircraft the time and effort of flying into rugged, unfamiliar territory.

The dismal state of African roadways means more than just bumpy rides. It stymies business growth, slows the delivery of humanitarian aid badly, and has been an obstacle to development in everything from tourism to agriculture.

The building of a trans-African road network has been a long-standing ambition on the continent and among foreign investors for decades. The African Union has designs for the project but it would require billions of dollars.

In lieu of those plans becoming a reality, African travelers and its business community have come to depend upon a network of small commuter airlines that reaches into the most remote corners of the continent. CJTF-HOA has tapped into this network.

Given the vast area covered by the mission of the CJTF-HOA task force &#8212; estimated at roughly two-thirds the size of the United States &#8212; flying personnel and supplies is almost a necessity.

Crocker said a small airline based in Nairobi, Kenya, has been contracted and began flying for the U.S. military earlier in December. The airline, which Crocker declined to name because of security concerns, has six small aircraft, holding at most 19 passengers.

Another benefit is the familiarity the local pilots have with Africa, Crocker said. &#8220;These guys fly in and out of these fields and they are good at it,&#8221; he said. &#8220;They are experienced, they have the understanding. Because of them we can get places we couldn&#8217;t get to otherwise.&#8221;

That extended reach becomes doubly important, Crocker said, when teams of task force personnel launch projects in remote locations. &#8220;It&#8217;s for the people out there digging the wells, looking after livestock, that are making a difference among villages,&#8221; Crocker said.

Shaw said he knows exactly what to look for when he flies African skies.

He said aside from the universal aviation concerns like weather and visibility, there are some unique challenges flying into some of the more remote landing pads in Africa. &#8220;A lot of animals like the heat of the tarmac,&#8221; he said. &#8220;I&#8217;ve seen a zebra get hit by propellers; wildebeests and gazelles. I could go on all day. You really have to watch it.&#8221;